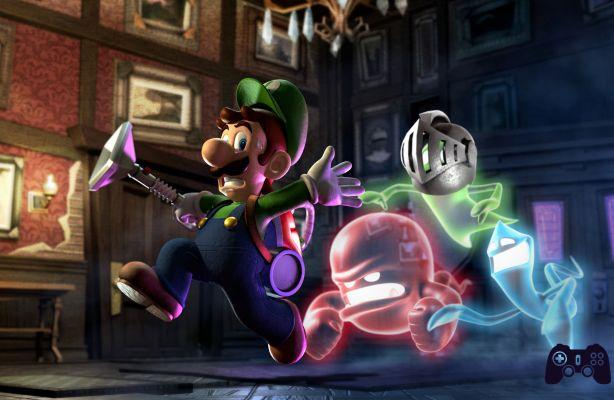 2012 was certainly a profitable year for the most famous plumber in the world, with five games with his name in the title. Mario really got busy, among coins, tennis courts, dice, acorn-mushrooms and paper worlds, leaving - most of the time - his brother in the shadows. And to say that Luigi has a series of his own, of which the first chapter was released ten years ago on the legendary Gamecube and is, still today, considered one of the best games ever.
At E3 2011 Shigeru Miyamoto announced the long-awaited sequel to Luigi's Mansion, promising it for 2012; unfortunately the title was postponed from month to month until arriving in the current year but now we are: will it have been worth waiting for these ten, almost eleven, years? So let's analyze the new adventure of the green plumber dressed in Luigi's Mansion 2 for 3DS, will the guys at Next Level Games have managed to keep the atmosphere of the first chapter intact and collect the legacy of Nintendo EAD?

King Boo is back and, not happy with the resounding defeat he suffered in the first chapter, he has a new plan in mind to upset Cupavalle: destroy the Dark Moon and hide it in different haunted buildings. By breaking down the celestial body, the calming effect that made Cupavalle's ghosts peaceful is dispersed, making them spiteful and violent; Professor Strambic, alarmed, can turn to the only person who helped him in the past: Luigi. Our hero will thus be transported from his home to the scientist's bunker and, even if reluctantly, he will accept the assignment. Armed with the Poltergust 5000, the new version of the legendary vacuum cleaner from the first chapter, our hero will have to capture the rebel ghosts without having a heart attack during the mission; in addition to the ghosts, we will be able to vacuum carpets, curtains, sheets, tablecloths, or objects that will become throwing projectiles (throwing poor Toad against the walls is one of the funniest points of this second chapter, ndGuido), blowing air into the balloons to fly to the upper floors of the villas or setting fire to balls of cobweb making them perfect flames launchers… In short, the Poltergust 5000 is the most versatile tool in the game and obviously the key to the many puzzles present.
The Game Boy Horror has also been replaced by the DS ("Double Scream", ed) which will play whenever Strambic has news or advice to give us, or simply at the end of the mission to allow us to return to the bunker. They conclude the set of tools supplied to poor Luigi the Strobobulbo, which will have the same function as the flashlight of the first chapter and will allow us, in addition to paralyzing ghosts, to open rooms and safes and activate particular mechanisms, and the special Arcobaluce torch that allows us to make invisible objects visible again and transform the special paintings scattered around the buildings into real objects, for example a painting with a coin can fill us with gold. Gold that will mainly be used to enhance our tools, as well as allow us to find, during the missions, a special object: in fact, the more coins we take during the specific mission, the higher the chances of finding in the chests, boxes or any other object inspectable, a golden Bone that will come in handy in the unfortunate case Luigi loses all hearts, saving us from the game over, thanks to Poltercucciolo, a ghost dog, who, attracted by the bone, will make our plumber recover senses, guaranteeing us another chance to complete the mission without having to start from scratch.

Next Level Games has therefore taken over the Luigi's Mansion brand from Nintendo EAD, modifying something while keeping the game atmosphere intact.
In the gameplay, which is practically unchanged, the 3DS touch screen is added to the controls which will function as a map and to answer Dr. Strambic's calls, as well as giving us explanations in the mission selection screen; even the gyroscope of the new Nintendo laptop is used properly, both to tilt the Poltergust (even if it is more convenient to use X and B, ed) and to scan the rooms from the windows, moving our console as if we were really looking for something.
The biggest change between the two chapters is definitely theincrease in areas to be explored: in fact, we pass from the 58 rooms of the only villa of the first title, to the multiple areas of Luigi's Mansion 2 (we do not want to tell you the exact number, so as not to ruin further surprises, ed), and above all each area will be divided into missions, at the end of which - like it or not - we will have to return to the bunker from Strambic and get a medal according to the results obtained (bronze, silver or gold): these evaluations are based on the Gold obtained, on the ghosts captured, on the Hearts lost and obviously on the time taken to complete the level; also there is a hidden Boo in each mission as well as a set of thirteen Gems per zone, some of which will not be obtainable except with certain upgrades. It goes without saying that replaying the missions already completed becomes almost an obligation, both to challenge the records of friends and to collect everything possible.
Moving on to the other supporting players in the game, or rather, to the opponents of our green-dressed plumber, we catch one of the first game flaws. Although the ghosts are many, and from the most disparate abilities, the categories in which they can be grouped are few; Furthermore the lack of Frame Ghosts is noticeable, original ectoplasms of the first chapter, which provided a touch of variety to the gameplay of the title. Absent for which also the Strambic gallery, which is replaced in this sequel by the Caveau, also appreciable the wink to the Ghostbusters in the PortaBoo, while the ghosts are all collected in the Porta Spectra. Finally, it will be possible to see Luigi's monetary funds, together with the gems collected in the various areas.
Although these differences, the legacy of Nintendo EAD has been duly collected and revived in a big way by Next Level Games, proving that even after ten years, a brand can still feel the same emotions as it once was.

Hunting for ghosts in 4

Luigi's Mansion 2 introduces multiplayer, both local and online, in the brand of Mario's brother: get ready to venture into the Dark Tower with up to three other players, using the services of the Nintendo Network.
Locally you can play both with friends who own the game, and thanks to the Download mode, using a single copy (digital or physical) of Luigi's Mansion 2; during online games we will be able to choose whether to play with the rest of the world or with someone on our Friends List. In both cases, the multiplayer modes are the same: we can choose how many floors our tower will have (the more floors there are, the more likely it is to find rare ghosts) and the difficulty (Normal, Hard or Expert); however, the higher the tower, the more difficult it will be to reach the finish line in two players, and we highly recommend tackling the 25-story towers with at least three.
The three cooperative modes present in Luigi's Mansion 2 are all different from each other: in Hunter, players will have to find the hidden ghosts and capture them as soon as possible, in Tempo they will need to find the special hatch within the time limit - capturing the ectoplasms to gain precious seconds - finally in Poltercuccioli it will be necessary to follow the footprints of the aforementioned dogs and find them within the time limit. All three of these modes guarantee hours of fun with friends and a perfect addition to such a title, complete with upgrades between rounds, including rewards.

Luigi's Mansion 2 proves us a well-finished and redefined graphic style, dragging those who loved the first chapter back in time; although the graphics are obviously superior to the Gamecube title, the atmosphere of the game remains the same: hats off to Next Level Games for having been able to maintain in all respects the sensations of the exploration of Luigi's Mansion. There will be to support this leap into the past the new arrangement of the main themes of the first chapter and all the verses emitted by the characters, both from dear Luigi who will "speak" like his brother (even if he will limit himself to a "Hello!") to the fantastic professor Strambic who will haunt us with the strangest verses, all seasoned with subtitles completely in the language so dear to Dante.
The icing on the technical cake is definitely the 3D effect, exclusive to the Nintendo laptop, which as on Star Fox 64 3D and Ocarina of Time 3D is neither invasive nor tiring but manages to transport us extremely deeply alongside Luigi in his hunt for ghosts.
Next Level Games has managed to propose us a technically excellent game, which shows all the muscles of 3DS and which pays for the delay of two years since the announcement; there is also a total and welcome absence of graphic bugs or frame drops. Many compliments for this aspect of Luigi's Mansion 2 which, while passing to a new western developer, has not lost its grit and verve.

Warm up your vacuum cleaners and your consoles, because Luigi is about to return, as beautiful as in the past and with many new features to be discovered: Luigi's Mansion 2 is a game that you will hardly regret buying and that will give you hours of fun both alone or in company.

Verdict 9/10 From Fear Comment Luigi's Mansion 2 arrives almost eleven years after the first chapter, this time developed by a western team that manages to pack a fun and immediate game and that cannot be missing in the collection of any 3DS owner. Just as Luigi's Mansion marked the history of Gamecube, becoming an essential title for the generation, Luigi's Mansion 2 is also destined to be remembered as one of the best titles for 3DS. Pros and cons ✓ Fun as hell
✓ Varied and balanced multiplayer
✓ Masterful 3D effect
✓ The same atmosphere of the title for Gamecube x Unoriginal ghosts compared to the first chapter
Do you want to be a video game expert and know all the tricks, guides and reviews for your video games ? Holygamerz.com is a group of video game fanatics who want to inform you about the best tricks, guides and tips. We offer you the best information to be a reference in gaming, so here you can find guides, tricks, secrets and tips so you can enjoy your games to the fullest. Are you ready to get all the achievements of that game that you resist so much? Enter now and enjoy your favorite video game to the fullest!
News Shenmue I & II: new video with Ryo Hazuki's English voice actor ❯