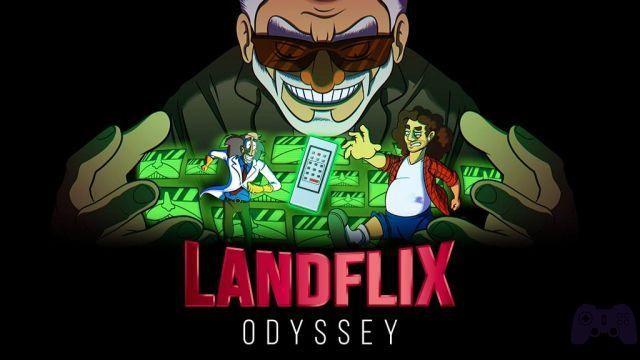 Too much TV hurts.

Larry, the protagonist of Landflix Odyssey, platform currently raising funds on Kickstarter, who finds himself having to face some of the most popular television universes from the inside.

While waiting for a full release, the Fantastic Studio it went on with a demo that we tried for you. Two levels, nothing too excessive, but which turned out to be much more challenging than expected.

If it wasn't already extremely obvious right away, the Fantastico Studio team reminds us on their Kickstarter page that what we have on our hands is a parody-themed product. In all respects, including its premise.

While our Larry was binge watching on his favorite on-demand streaming platform (which in order not to infringe any copyright we will call N. flix... nay, no, that's too explicit ... Net F.), suddenly finds himself transported into the parallel dimension in which these shows are real, thanks to Uncle Doc's six nuclear batteries (inspired by Doc Brown from Back to the Future) randomly remedied in place of the normal ones. 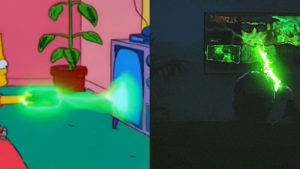 To complicate matters it takes a small robot, sent by evil CEO of Landflix to steal those batteries. The plan is simple: use them to escape the alternate dimension and conquer our world with its army of fictional characters.

After a brief confrontation, and informed by Uncle Doc that this is the only way home, Larry finds himself having to recover five of the six batteries in as many TV shows. We will then be called upon to face the government conspiracies and cosmic horrors of Peculiar Stuff (Stranger Things), the winter and armies of the dead in Elder Thrones (Game of Thrones), ninjas and gangsters in Blindevil (DareDevil), a fierce war between the Mexican cartel and fast food gang in Going Mad (Breaking Bad) and deviated zombies and humans in The Standing Zombie (The Walking Dead). 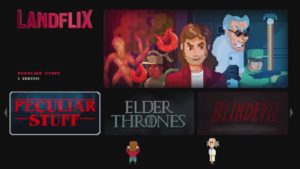 Do you have a remote control in your pocket or are you happy to see me?

If in the premise there is a lot of nice but very little original (apart from you find them in order not to infringe copyrights), at the level of mechanics the two levels tested in the demo do much more justice to the team's work. The game is articulated as a Megaman-style platformer, with a lot of choice of stages, interchangeable powers and a life bar (three hearts, for starters). Each series corresponds to various "episodes", with a final boss to be defeated.

Initially, however, the challenge is decidedly unequal. Basically, in fact, Larry can only count on his own jump to hit smaller enemies. Larger enemies will first have to be stunned with a bullet burp or grenade burp, but this will only be possible for us after filling up on beer from the mugs scattered around the levels. There is also an in-game shop, where to exchange the collected projects (three in each episode) with permanent upgrades to the energy bar or other small improvements to the basic skills, but we will hardly be able to get our hands on before a good slice of the game.

Fortunately, an ally comes to our rescue for each setting, which he will give us a specific power to use freely even outside of its own series. In the two test levels we played, linked to Stranger Things and Game of Thrones, the copyright-friendly equivalents of Dustin and Jon Snow teach us the use of the remote control respectively (able to move us to the Other Side, a world " alternative ”style Sottosopra) and the magic sword, to attack and petrify us on the defensive. 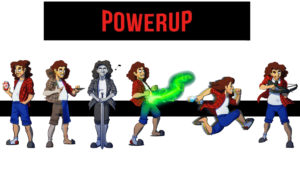 In addition, although individual upgrades are expressly linked to the series in which they are acquired, many levels have alternative paths, secret passages or more to explore thanks to the use of one or more objects. This is to the advantage of the player, drastically increasing the replayability of the "previous episodes".

To learn more:
Inside (and behind) Landflix Odyssey: interview with Fantastico Studio

This medal, however, also has a second face: despite the non-linearity of Landflix Odyssey (each series can be completed independently of the others), some levels act as tutorials not only for the specific skills of the series, but also for the game in general, especially those of Peculiar Things. Which means that a player who embarks on the adventure starting from any other point, you risk being faced with skills, upgrades and a graphical interface that you don't understand. Sure, it's not such a limiting factor, and the core mechanics are pretty intuitive with a little practice, but it's an aspect that makes the lack of a true introductory level in Megaman style.

However, since this is a partial demo on a title still under development, on this point we feel we can temporarily suspend the judgment. Furthermore, Landflix Odyssey has enough variety to offer that if we wanted to, at times, we could just go straight from one checkpoint to another, ignoring the opponents.

Comment Although the last few years have been populated by indie platformers with retro graphics and high difficulty for the sheer sake of challenging players, Landflix Odyssey manages to walk that thin area between frustration and real challenge. The title of Fantastico Studio is genuinely difficult, and not for lack of design, on the contrary ... The situations that arise before us are not easy to deal with, and it is not uncommon to find yourself surrounded by enemies and in an awkward position to fight them. But our deaths or successes depend entirely on the player: the controls are very fluid (apart from a small exception in the times of petrification of the sword, almost certainly a bug), and the experience is truly that of a very well done classic title. The only note that could be out of tune, perhaps, is its parody nature, perhaps more of a deterrent for those who, at first glance, do not appreciate this kind of humor, but after trying the demo (downloadable via the Kickstarter page of the project), there we highly recommend going beyond this aspect. Between the captivating graphics, the characterizations of the opponents (of course, many enemies are repeated, but the variety is still much higher than normal, both in the visual aspect and in the attack patterns) and the diversification of atmospheres and styles of play proposed, Landflix Odyssey comes as a title that has many arrows in its bow and no rush to reveal them all in one fell swoop. Pros and cons ✓ Great variety of settings
✓ Smooth controls
✓ Difficult but almost never frustrating x Lack of a "real" tutorial level
Do you want to be a video game expert and know all the tricks, guides and reviews for your video games ? Holygamerz.com is a group of video game fanatics who want to inform you about the best tricks, guides and tips. We offer you the best information to be a reference in gaming, so here you can find guides, tricks, secrets and tips so you can enjoy your games to the fullest. Are you ready to get all the achievements of that game that you resist so much? Enter now and enjoy your favorite video game to the fullest!
News + Google Stadia and Amazon Luna united for a Cloud Gaming without exclusives ❯