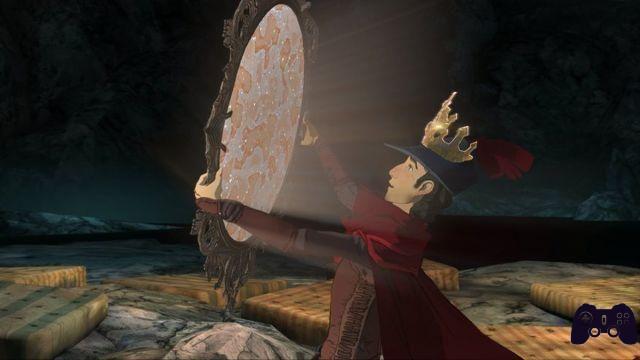 It was when 1983 Sierra, for the first time, it catapulted players into the kingdom of Daventry, to narrate and take part in the affairs of the royal family. For the occasion, it was also thought to give a new look to the genre, giving it to the world the first animated graphic adventure on pc.

Thirty years, eight titles and several reissues later, The Odd Gentlemen and revived it Sierra Entertainment offer players a new opportunity to return to the role of King Graham, with a storyline halfway between the LucasArts adventures and The Fantastic Story.

Inspired by the success of the format used by TellTale (and more recently by SquareEnix), King's Quest: A Knight To Remember it is only the first chapter of a series of five episodes, which cover some adventures during the entire life of the now elderly ex-knight, of whom we will once again take on the role.

Mirror mirror on the wall…

On a narrative level, the title is a cross between a reboot and a remake of the original series, without focusing on the events already seen, with the exception of the brief introduction set in the well of the first King's Quest. As the then Sir Graham, we will find ourselves traveling to the revisited lair of a mammoth (and narcoleptic) dragon, in search of the fabulous magic mirror, one of the three treasures of Daventry seen in Quest for the Crown. Without too many frills, and accompanied by Christopher Lloyd's narrating voice, we will quickly become familiar with the command system, which almost completely discards the use of the mouse cursor in favor of a more gamepad-friendly interface.


A few bars later, we will be called to make the first important choice of the game, and introduced to the true story behind the prologue: King Graham, now an elderly man, tells his vicissitudes to the enthusiastic nephew Gwendolyn, assisted by the visions projected by the same magic mirror recovered years before. One of these leads players to experience the beginnings of Graham's career firsthand, at the time when a selection to become a knight changed his life. 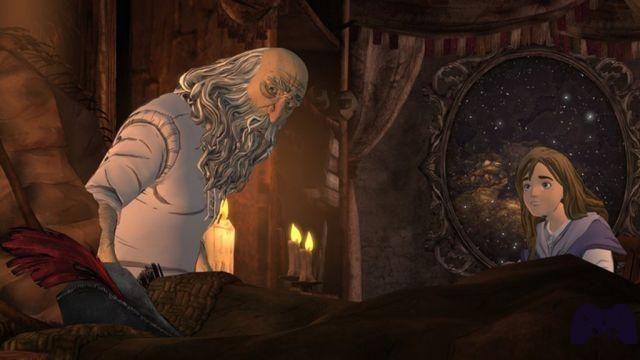 The tone of the story is maintained in a pleasant limbo between humor and seriousness, passing from moments that closely resemble the first Monkey Island, to sections of subtle drama. The result is an experience that makes Graham more human and relatable than other heroes of the genre, overexcited in many situations but definitely less buffoon than the standard in graphic adventures.

The most absurd situations are often compensated by a logic behind them, while the bulk of the irony is entrusted to the narrative frame of the old King and his niece commenting on the player's actions.

… How much is there to do in my realm?

The gameplay is also affected by this narrative choice, as well as the decision of almost completely abolish the cursor.

Unlike its predecessors, the new King's Quest leaves a lot of room for the intuition of the players, eliminating most of the involuntary clues due to the simple passage of the mouse over interactable objects. The whole world is explorable without ever taking your hands off the keyboard (or from the gamepad), and the ability to go in first person and carefully observe the surrounding area is limited to Graham's range and field of view, making it impossible to use it to get out of a stalemate.


Moreover, similar situations are much less frequent than in the past: one of the mantras of the first chapters was, with good reason, "collect anything that is not nailed, and if it is, find a way to remove the nails", given the amount of situations that made the game impossible to finish. A Knight to Remember, on the other hand, seems to offer players greater freedom of action, both by introducing an inventory that responds only to certain contexts, and with the possibility of solving many key sections of the game in a different way without major risks of getting stuck. 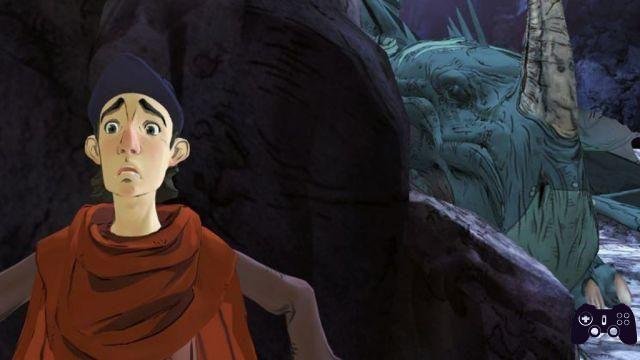 Often, however, the choice of a route takes place long before the player is actually aware of it, eliminating the possibility of undertaking others (for example, choosing a shield instead of a table as an emergency wheel, and not leaving any money as compensation, prevents later being able to choose one of the methods to collect the eye of a monster) . Combining it all with only one autosave per slot and the inability to skip dialogs and cutscenes, the result is a rather frustrating situation for those who want to experience everything the game has to offer, forcing players to a new game or frequent slot change.

However, if we consider the already longer duration of a good portion of the episodic titles currently on the market (between five and six hours, barring hitches), taking other paths involves a notable increase in both longevity and replayability.

Just as in the past, mortal situations are quite frequent, especially in the sequences more marked by action than in solving the puzzles (escaping from a dragon with a cave full of collapsing beds, between one QTE and another). But unlike their predecessors, in A Knight to Remember they never result in frustration. In addition to the frequency of the checkpoints from which to restart after a death, the story itself, by its nature, cancel the player's accidental deaths with a simple static screen in front of the magic mirror and a sarcastic comment from Gwen or the old King Graham about how the above didn't really happen.
Often and willingly, indeed, we will be tempted to take the most stupid and patently lethal actions, for the sole purpose of seeing the consequences, which range from a simple pitiful veil of the shot to animations taken from the short films of Willy the Coyote. 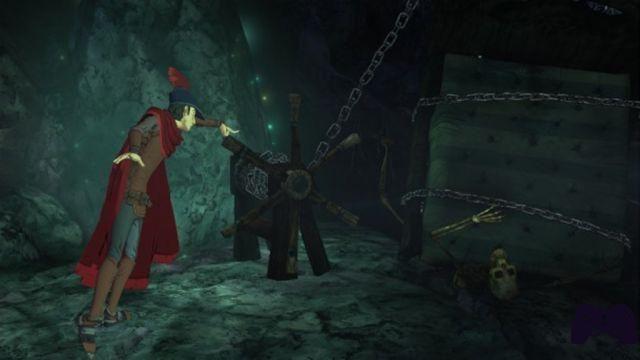 Always in cartoon style are the atmospheres, almost to imply that the adventure of the young Graham, although full of action and danger, it plays more on fun than epic. The backdrops drawn are neat and vibrant like a theatrical scenography, while the look of the characters deliberately exaggerates their qualities: from the overly fiscal guards with shining armor and rigid movements, to the braggart knights worthy of the miles gloriosus, passing through an overweight baker with mustache and a chef's hat who admits to having modeled his looks that way because "no one would take a skinny baker seriously".

To complete the characterization of the characters there is a dubbing that, despite the excellent cast, unfortunately it does not always prove to be constant: while Christopher “doc Brown” Lloyd e Wallace Shawn (the sympathetic criminal Vizzini in "The Fantastic Story") do their best, the performance of Tom “Spongebob” Kenny as the Merchant of Miracles sounds more annoying than intriguing, as does that of Zelda Williams like Amaya Blackstone, almost bored and not very incisive with respect to animated reactions.

Verdict 8/10 Mi nombre es Inigo Monto ... ehr, I meant Graham! Comment From 1983 to 2015 the leap is long for the universe created by the brilliant Roberta Williams, and the new King's Quest by The Odd Gentlemen, while changing many cards on the table (starting from the narrative tone, less serious but more affable) both in the story that in gameplay, is committed to keeping its mythology alive. Between references, quotes and tapestries with the covers of its predecessors, A Knight to Remember is for many fans of the saga a blast from the past. However, the game itself is anything but a simple journey into nostalgia, and largely manages to walk on its legs even without its lore behind it: devoid of the terrible tendency to unsolvable situations of its predecessors, updated with action sequences. dosed with parsimony, and equipped with a new system of controls that hardly make it categorized as a "point & click" adventure, the new adventures of King Graham of Daventry become a good access point to the series even for fans of the last hour . Awaiting them is a title clearly inspired by the recent TellTale titles and the narrative style of The Fantastic Story ("Princess Bride", from which even one of the actors as a voice actor recovers), endowed with irony and self-irony that closely resembles the first and slightly less crazy Monkey Island. However, the story told to Gwendolyn is devoid of the illogical madness that accompanies many puzzles in this genre of titles. The situations presented are almost always solvable with petty logic, making the characters something more than simple kleptomaniacs with high cognitive functions, or braggart McGyver. Graham (both young and adult) is an affable character, with whom to identify, and is at the same time accompanied by two excellent narrative shoulders such as Gwendolyn and the astute knight Manny, able to raise both moments of genuine laughs and deeper themes. than appears on the surface. While not without flaws (most of which are related to minor gameplay flaws, such as the inability to skip dialogues), A Knight to Remember really does its best to be a title "to remember", and leaves in a pleasant mouth water for the next chapters. Pros and cons ✓ Pleasant and excellently cared for Cel Shading
✓ Excellent alternation between irony and seriousness
✓ Removed the "frustration factor" of the old chapters
✓ Cast of dubbers of excellence ... x ... but with fluctuating performances
x Inability to skip dialogues
x Many branches but only one autosave per slot
Do you want to be a video game expert and know all the tricks, guides and reviews for your video games ? Holygamerz.com is a group of video game fanatics who want to inform you about the best tricks, guides and tips. We offer you the best information to be a reference in gaming, so here you can find guides, tricks, secrets and tips so you can enjoy your games to the fullest. Are you ready to get all the achievements of that game that you resist so much? Enter now and enjoy your favorite video game to the fullest!
Mario Tennis: Ultra Smash preview ❯

Add a comment from King's Quest: A Knight to Remember review