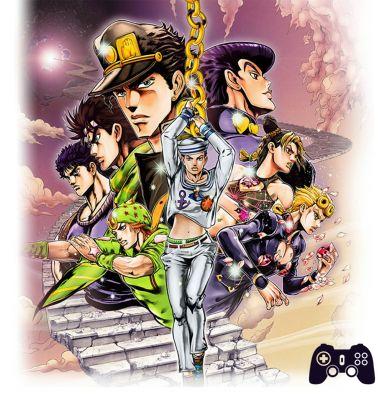 Two years ago Bandai Namco Entertainment tried to make PlayStation 3 owners passionate about the world of JoJo, with All Star Battle, fighting game developed by Cyber ​​Connect 2 based on the eight main series by Hirohiro Araki, a product that appealed to Joestar fans a lot, and a little less to the general public. Last June 30, it landed in stores, only in the PlayStation 4 version (in the homeland it is also available for PlayStation 3) JoJo's Bizarre Adventure: Eyes of Heaven (from now only Eyes of Heaven ndGuido) with a starting price of € 69,99 and a practically all new gameplay, will the team be able to solve the errors and give new light to the videogame counterpart of Jotaro and associates?

Before focusing on Eyes of Heaven, it is necessary to make a recap of the current situation of Araki's work, changed from what happened in 2014: the paper version continues its run undaunted, offering readers approximately every four months a new volume of Jojolion (eighth series still in progress also in Japan), while the anime has finally debuted (for now only subtitled) on the free platform VVVID, or simulcast on  Crunchyroll (Diamond is Unbreakable, the fourth series, is currently underway); although the Joestar family is spreading more and more, it still remains a commercially less mass-produced product than Naruto or One Piece, and a full-price sale was definitely not a smart move (we'll find out some reasons later).

Having concluded the premises on the state of the brand, let's move on to the original plot of Eyes of Heaven that starts from the clash between Jotaro and Dio at the end of Stardust Crusaders and from there branches off in directions never seen in the paper counterpart.

The story holds up to almost the end

While Jotaro and Joseph are saying goodbye to Polnareff at the airport, the three are attacked by Avdol and Iggy, who died during the battle with God. Once the two friends are defeated, they are joined by Speedwagon, who explains to him about a Supreme, who is altering the reality with anomalies, and was commissioned by Jonathan Joestar himself to travel between the eras of the allies to remedy them. Traveling between the eight different eras (which are none other than the eight series of The Bizarre Adventures of JoJo) will enrich with new elements (the Joestars and their affiliates) challenging each other in last-blown fights not only with historical enemies but also with allies believed to be lost forever. The plot of Eyes of Heaven is completed (net of secondary missions) in about fifteen hours but, despite having good moments, with some bizarre dialogues capable of making fans of Araki's work smile, it collapses into the redundancy of the last chapters, where the story should in all effects take off, with the arrival of the Supreme (and its final stand). 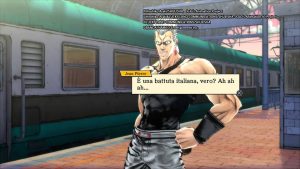 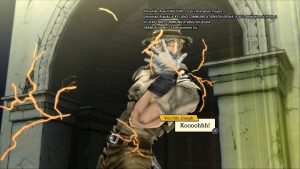 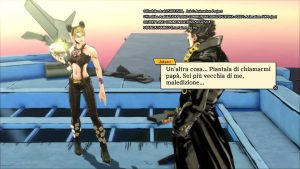 So that's your skill

A character created especially for the game is not usable

The story mode will see us gradually unlock new characters from the series that will enrich our party and can be used in combat. CC2 has implemented a level system with relative skill tree to upgrade our warriors and get ready for the next battle, or to face the special missions scattered around the different game hubs (which are nothing more than the battle arenas), and to chase the collectibles that once delivered to Rohan will unlock extra colors; directly from All Star Battle, the well-stocked shop of costumes and phrases (as well as help items) is back with which to customize the poses and appearance of all 53 characters, among which the Supreme, created by Araki, is unfortunately excluded just for Eyes of Heaven but not playable in any way. Also from all Star Batlle the differentiation into categories: users of Hamon, Men of the Pillar (Vampires), owners of Stands and Warriors on Horseback.

Each of which has its own commands and strategies to use on the battlefield even if any differentiation of the techniques to be performed has been abolished by reducing the special ability (whatever it is, including transformations, even if at this turn they will be temporary) to R1 button. Where All Star Battle did not have complicated gameplay, but allowed a large number of different maneuvers depending on the character used, Eyes of Heaven reduces each attack to a combination of L1 plus key, with a more or less long reload time for each move , and an explosion of energy capable of interrupting the opponent's combo with R2 + L2. This further simplification would not be a problem if the clashes remained 1 on 1 (present in rare cases in the story mode) but Eyes of Heaven boasts of couple clashes.

Two-on-two clashes could have been handled much better starting fromnaivety of artificial intelligence of our partner, who most of the time will watch us mangling the opponents (or let us mangling them) without intervening except to activate the double combos (touch of the touchpad) up to the conformation of the arenas, real corners in which frame your opponent (or get caught) or blind spots where the camera decides to abandon us. And it is precisely the latter that is the third major flaw of the Eyes of Heaven gameplay: assigned to R3, it will conflict with the other function of the button, that is, the locking of the lens. Several times in our two-on-two battles we found ourselves changing lenses when we just wanted to move the camera from a wall or a corridor, losing valuable combos or simply not understanding anything of what was happening on the screen (and in case we had to challenge small opponents like Iggy the situation becomes even more desperate). 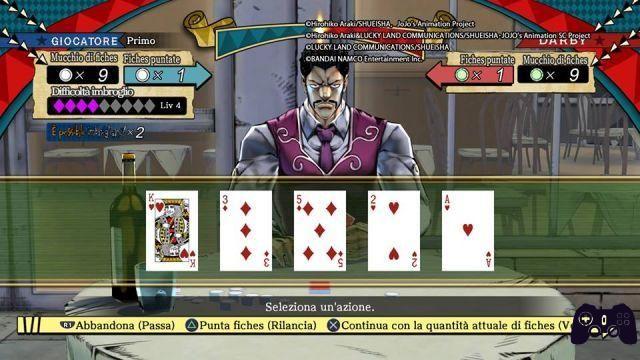 Finally, in the story mode, two other types of gameplay have been inserted: a mini-game based on poker in which you can cheat and / or prevent the opponent from doing it by entering the right sequence of keys, and phases similar to the musou brought to fame by Omega Force but largely ridiculous and slow (and remotely reminiscent of the horde battles seen in Asura's Wrath). A free battle mode with no options closes the circle, if we exclude the possibility of changing the duration of the match, in which you can face or the CPU, or see matches fought by it. The second player will not be able to face us but only help us in battle by replacing the already infamous AI. The absence of a "classic" local multiplayer is another of the drawbacks of Eyes of Heaven.

This marks my triumph! Too bad there is no one to see it.

We were talking at the beginning of the apparently exaggerated price of Eyes of Heaven, the few sales of the title are in fact found in the virtually deserted online sector just a month after the release of the CC2 game. To play a friendly game at the moment you have to wait five to ten minutes (when you are lucky) while in Ranked mode the situation is more rosy or at least, it is until the socntro starts and the characters start shooting due to an incessant lag. which continues for the duration of the match. Too bad that the Seasons of All Star Battle (special weekly events that pushed to play online to earn points with which to buy exclusive costumes) have been canceled completely, leaving only room for classic 2 against 2 clashes (with the usual annoying and nothing at all AI don't give us a hand). 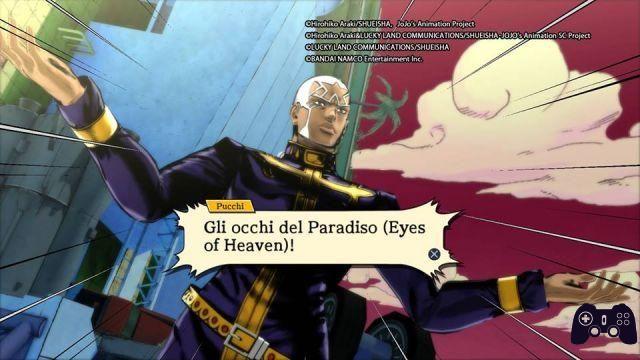 However, there is a couple of points to be scored in favor of Eyes of Heaven: let's start from the dubbing that uses the voices of the animated series (Up to Diamond is Unbreakable) and proposes again, except for homonymy, all the voices of All Star Battle, offering an acting worthy of a shonen. Not least the soundtrack, which manages to intrigue the player not only with the main songs, but also with the individual ones of each protagonist. Two of the main flaws of the predecessor of Eyes of Heaven have also been corrected: this time fans will be able to enjoy magnificent animated scenes in cel shading in addition to the inevitable finishing moves (even as a couple) and a Spanish translation worthy of the name (although it remains still the problem on the rights of many stands based on music bands) with big mistakes finally absent. Too bad that all this is not enough to save production.

Verdict 5/10 Yare yare Comment Although many of the defects of All Star Battle have been corrected, Eyes of Heaven adds new ones and mainly damages the gameplay of the new fighting game dedicated to the world of Araki. While 2v2 may seem interesting, on the other we find arenas with too many obstacles, capable of making the games one-way or endless travails due to a camera that does not do its job. If we add to this an AI of the companions that is too naive, an online one after a month from the release already deserted and a decidedly too high price for the West, the result is a disappointing game that will soon end up in oblivion. Hopefully, if CC2 commits itself to the series once again, it will go back to classic 1-on-1 battles, or fix Eyes of Heaven's tons of flaws. Pros and cons ✓ Graphic and sound sector
✓ The plot has some good moments ... x ... but it becomes redundant on the finish
x Far too chaotic gameplay
x AI indecent companion
x Internship to be reviewed
x Absence of a "classic" local multiplayer
x Problems online
Do you want to be a video game expert and know all the tricks, guides and reviews for your video games ? Holygamerz.com is a group of video game fanatics who want to inform you about the best tricks, guides and tips. We offer you the best information to be a reference in gaming, so here you can find guides, tricks, secrets and tips so you can enjoy your games to the fullest. Are you ready to get all the achievements of that game that you resist so much? Enter now and enjoy your favorite video game to the fullest!
Celeste Review - Free-climbing between pixels ❯