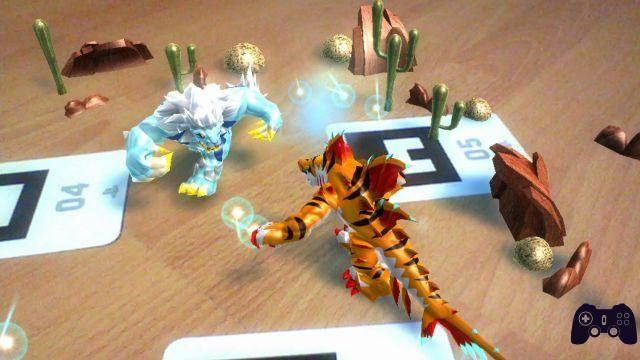 For the Invizimals series by Novarama, 2013 is the year of the relaunch in a big way. After the success of the three chapters for Playstation Portable, the universe of the brand appears more expanding than ever: in addition to Invizimals: The Lost Kingdom for Playstation 3 (which marks the debut of the series on home console) and that 'Invizimals: The Alliance on Playstation Vita, which we had already told you about in a preview, there will be a TV series and a series of collectible cards in collaboration with Panini, the latter accompanied by a free application for PSP, PS Vita, Android and iOS. Today we will deal with the part of this project that concerns more closely the Sony laptop, or Invizimals: The Alliance. Console in one hand and AR Play Cards in the other (and possibly moving in a fairly large space) we officially start the hunt for monsters made in Novarama.

The story mode, unlike what we are used to seeing in a videogame production, does not force the player to play the role of any fictional alter ego: the protagonist is whoever has the console in hand and the game characters speak directly to him, a narrative artifice certainly able to strike the interest of the target to whom the title is aimed. The first figure you interact with is Kenichi "Keni" Nakamura, a scientist who studies creatures and is trying to find out why they are moving en masse from their world to ours. Parallel to the studies and discoveries of Keni, other characters (including Hiro, the protagonist of Il Regno Perduto, who will not disdain some extras) will come across a multinational whose public facade is that of the corporation with the problem of cost at heart energy (but which in reality plots in the shadows to exploit the Invizimals to make profits), going to build a somewhat banal and quite stereotyped plot but certainly able to do his own if compared to the target audience (after all, if over the years stories with very similar premises and targets have also been repeated in other media, it is no coincidence).

The player's task will be to support Keni and the rest of the "cast" by building and managing an outpost to welcome the creatures arriving on the planet. This activity will include, in addition to hunting sessions useful to populate the outpost and prevent it from being attacked, tasks such as the construction of new buildings (with mechanics already gutted in the preview) and their exploitation. Each building has its specific role and fulfills a task that is then reflected on other aspects of the experience, with for example the Hotel (where the creatures are housed) which allows you to see the statistics of each captured Invizimal, to select them. attacks and when possible also to make it evolve and the Kitchen useful for creating Vectors (upgrades to be used in the Arena or during multiplayer fights) by combining together the ingredients collected thanks to the minigames of the Explorers' Cabin. At the "center of the village" there is the Shadow Portal, which allows you to continue the story by capturing new Invizimals and to recapture specimens already taken, and to close the roundup of available structures is the Market, the place where you can buy and resell Invizimals and Vector in exchange for Sparks, the game currency.

It's a jungle out there

As those who have already touched one of the previous chapters already know, the two main aspects of the experience are captures and fights. The "hunting" aspect, compared to the releases for the now obsolete PlayStation Portable, are improved and expanded thanks to the most updated PS Vita hardware. In addition to no longer having to resort to external devices thanks to the presence of the integrated camera, the sessions in search of creatures are now no longer fully linked to augmented reality cards, allowing the Invizimals to "hide" in every point of the real world: whenever want to capture an Invizimal it is in fact necessary first to locate its position by following the indications that appear on the screen (framing certain colors, moving within the space that surrounds us or following sounds until the creature is found). As highlighted during the preview, the most "critical" issue of these mini games it is the request for space for some of these, which makes them complicated indoors, forcing players to repeat the procedure until success. In any case, once the "prey" is located, the actual capture phase follows, whose mechanics generally vary according to the Invizimal you are trying to recruit into your ranks. Some beasts will attack us forcing us to dodge their bullets and then hit them "in the head" (via rear touchpad or touchscreen) when they get close, with others we will instead have to return fire, always avoiding being hit, while on other occasions we will be literally challenged to " one two three stars "and we should approach the Invizimal while he is counting from behind (avoiding moving when he is looking at us) ... Without forgetting obstacle courses rigorously designed in augmented reality or singing competitions in which the verses emitted by the target. In short, from the point of view of the variety of situations, he certainly did not skimp, trying to offer as different a hunting experience as possible for each of the 150 creatures. The downside, however, manifests itself in mechanics that are decidedly more aimed at the younger audience, who will find the “older” players less willing to indulge them.

On the box it says "from seven years up"

If the catches are probably more appreciable by the lower age groups, the same is not true for the matchmaking component. The battles (against the CPU or against other players) are faced with a fighting approach, whose mechanics are contaminated by aspects borrowed from role-playing or turn-based games: every time our little monster performs one of his four attacks (generally one powerful, one fast and two basic) will consume a certain amount of stamina, and when this reaches zero it will be necessary to remain still until it is partially recharged. Even the ability to upgrade your Invizimals at each level up by increasing the statistics we prefer (such as health, attack, reload speed or amount of stamina) is taken up by this type of game and gives greater weight to the "strategic" aspect of the game. game, that in the Arena he is capable of extracting some satisfaction from even the most grown-up ones. To complete the picture of the tactical solutions available then come the Vectors we talked about a few lines above, which can be activated in the middle of the fight (with effects ranging from the recovery of health points to the execution of special moves capable of heavily damaging the opponents) and can concretely influence the course of the match. For the most passionate about the challenge, there is also the possibility of fighting simultaneously against up to three opponents (but also two against two, or three against one).


Verdict 7/10 Almost surprising Comment As said in the preview comment, leaving aside all the prejudices that you may have in front of such a product, Invizimal: The Alliance can be a successful and entertaining product. However, it should be taken into account that the target audience is that of younger gamers and that probably the most "elderly" having to go around the house with the console in hand or emit strange noises to capture some creatures could make us turn up their noses, but the Arena on the other hand can give a certain amount of satisfaction even to the most experienced. Pros and cons ✓ The catches offer a good level of variety
✓ The dating component works and entertains even the greatest x The target audience remains the one in the lower age groups
x Some catches must be retried several times or faced outdoors
x Cross Play with PS3 will need to be verified

Do you want to be a video game expert and know all the tricks, guides and reviews for your video games ? Holygamerz.com is a group of video game fanatics who want to inform you about the best tricks, guides and tips. We offer you the best information to be a reference in gaming, so here you can find guides, tricks, secrets and tips so you can enjoy your games to the fullest. Are you ready to get all the achievements of that game that you resist so much? Enter now and enjoy your favorite video game to the fullest!
Electro Ride Review: The Neon Racing on Switch is one of the worst things that happened in Eastern Europe - Review ❯