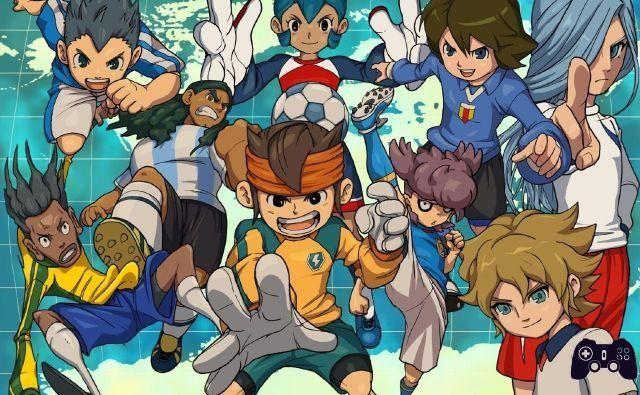 In Europe the universe of Inazuma Eleven arrived first in its animated form, and only later in the videogame one and it is not surprising, therefore, if we are three chapters behind the Rising Sun (Galaxy, the third chapter of the series GO! Will be released in Japan in December).
Inazuma Eleven 3 arrives three years later than the Japanese release, passing from DS to 3DS in the two versions "Explosive Fire"And"Lightning Flash".
In Japan this version for 3DS was contained in “Inazuma Eleven 123! the Legend of Mark Evans ”a real collection of all the chapters for DS, adapted for the new Nintendo laptop.
Unfortunately, we Europeans will have to settle for the 3D conversion of only the third chapter of the Level 5 football RPG, recovering, if possible, the previous episodes on DS.

Japan against the world

Three months after the events of Inazuma Eleven 2, Mark and his friends are summoned by coach Hillman for a very important event: the Football Frontier International selections.
The FFI is the world tournament in which the most promising under 15 players from all over the world compete against each other, and it is a golden opportunity to face new opponents and improve even more.
With a new coach, promising new players and old enemies become teammates, Raimon changes her name to Inazuma Japan and is ready to face the many opposing teams with the usual powerful special techniques.
Around the world tournament we find, as usual, some excellent subplots, followed by the mysteries that the guys of Level 5 will reveal game after game.
Like the previous episodes, Inazuma Eleven 3 also has a maniacally curated plot, in which each piece will fit together with the other and with the events of the previous episodes, revealing again how the narrative structure is the strong point of the series.
The only problem is encountered by those who have already seen the animated series and therefore will already know most of the main events of this third chapter: especially in the version we tested, on which the homonymous third series of the cartoon is based. .
In Fire Explosive in fact we will relive the flashbacks of Hector Helio (Rococo in the original language ndGuido) and his meeting with a mysterious man in some way linked to our Mark; in Lampo Folgorante instead, you can follow, in addition of course to Inazuma Japan, also the events of Paolo Bianchi, the star of the Italian national team, and of a mysterious girl linked to the past of an old enemy of Raimon.
As with the two versions of the second chapter, the two variants of Inazuma Eleven 3 also have differences in the players to be recruited, in the secret teams and in little extras scattered around the game, but the basic plot remains the same for both cartridges.

It is good to clarify again that Inazuma Eleven is a football themed RPG, in case there are still people unaware of how different it is from a normal football game (If RPGs are not for you we recommend the fun Inazuma Eleven Strikers for Wii , all-round football game).
Inazuma Eleven 3 re-proposes the same consolidated gameplay of the first two episodes, alternating exploratory sections with real football matches, all completely on the touch screen using the 3DS stylus.
While in the exploratory phases we will be able to move our four champions also with the analog stick, in the casual challenges and in the encounters we will have to rely only on the stylus, moving the camera on the field with the lever, or with the keys for left-handed players.
As in any self-respecting RPG, even in Inazuma Eleven each character has his role and his statistics: we have goalkeepers, defenders, center-forward and attackers, each able to learn exclusive techniques (if they are key characters of the story) or two of the 350 special techniques available and common to all players.
The effectiveness of each technique is based again on the combination of the elements: the earth move will have more effect on the fire ones, the fire on the forest ones, the forest on the air which finally closes the cycle by doubling the power on the earth ones; to this is added the type of the character and obviously his statistics.
During the random challenges we will have to reach one of the four random objectives (scoring a goal without conceding, not conceding a goal, stealing the ball from the opponents and not being stolen) in four-on-four challenges. If we emerge as winners, we will get experience, money, passion points and charisma points (the former will be used to recover energy or to participate in training, while the latter will be used to sign famous players).
During the real matches we will find ourselves in command of all eleven players, and between offensive, defensive techniques and deadly shots we will have to win by scoring more goals than the opponent.

A fun addition to the games are group tactics, special techniques to be performed during the passes to take possession of the ball or keep control of it, all activated from the touch screen and obtainable by continuing in the main storyline.
Inazuma Eleven 3 is easier than its predecessors: although in this new chapter the players tire more easily (making the exaggeration wanted by Level 5 slightly more truthful) the opponents are less aggressive, proving tougher only in the final stages and in friendlies; Level 5 reversed what happened in the second chapter, where it happened to win the friendlies 5 to 0 and repeat the games of the plot several times.

In Inazuma Eleven 3 we find the welcome return of the lens blower and the contact map, already appreciated in previous chapters and the only way to create our dream team.
In this third chapter the methods for obtaining new players double: it may happen to obtain them after winning the random challenges, or through the distributor engagement, a typical Japanese gashapon car, in which we will find new companions willing to join our team.
However, the same defect of the second chapter must be emphasized. Although you can choose from 2200 graphically different players, those with unique and truly powerful special techniques are around 200 and, although there are a few rare ones from the ball dispenser, most of them are mostly obtainable via lens blower and contact map. .

Thanks to all these extra players, RPG fans will find their match to complete the player album, or to take on all the secret teams that their version offers.
From Friday 27 September, the official release date of Inazuma Eleven 3, Level 5 will begin to distribute unique players via SpotPass, in addition to those already present in the game; the title therefore also maintains its other trademark: offering the player the widest choice for their dream team.
In fact, we will be able to use our Dream Team to face the owners of the game met via StreetPass, or face our friends via wireless (or, as in the chapters for DS, join them in friendlies against the CPU).

From a graphic point of view, Inazuma Eleven 3 has not made great strides compared to the previous chapters. The 2D models of the characters are more defined on the isometric bird's eye map, but this is certainly due to the transition from DS to 3DS.
The 3D effect is used only during special techniques, the only moments of the game to appear on the upper screen. Each technique is pleasant thanks to the streoscopic 3D of the Nintendo console, but we expected a greater use of the feature.
Everything else, from the masterfully animated scenes to the actual gameplay will take place on the touch screen, leaving the top screen mostly black or filled with the game map.
The animated scenes are the true focus of the story and, being prior to the cartoon, they have darker shades, like those found in the Professor Layton series.
The voice acting is completely in Spanish, and keeps almost all the voice actors of the animated series, including Leonardo Graziano and Emanuela Pacotto.
As in every Level 5 game, also in Inazuma Eleven 3 we find a unique character design for each of the 2200 usable characters and for all those around. As in the previous chapters, it will happen to sign a player just because we like it aesthetically, despite the fact that for the statistics he is a nobody.
The music closes the roundup, presenting the main themes of the previous chapters, plus exclusive songs that are linked to the musical style of each nation faced by Inazuma Japan.

Inevitable for fans of the series, Inazuma Eleven 3 confirms itself as a niche title reserved for lovers of Mark and companions, and for the references of the plot, it cannot be fully appreciated if the other chapters have not been played first.

Verdict 8/10 Japan wins the World Cup twice. Comment Inazuma Eleven 3 is a confirmation of the goodness already found in the previous episodes of the series and a demonstration of how a football game can be made with a totally alternative gameplay and outside the canons of traditional sports video games. While not presenting too many additions, it enjoys a well-studied plot that will thrill those who loved the first two chapters. The only flaw we find in the edition: these versions in Japan are in fact contained in a collection of the seven games in the series, while we come to us divided and at full price, three years late. We sincerely hope that the distance with the Japanese releases will shorten for the GO series. Pros and cons ✓ Great animated scenes
✓ Well characterized main characters
✓ Good visualization of Special Techniques in 3D x Easier than the previous chapter
x Use of 3D limited to special techniques
Do you want to be a video game expert and know all the tricks, guides and reviews for your video games ? Holygamerz.com is a group of video game fanatics who want to inform you about the best tricks, guides and tips. We offer you the best information to be a reference in gaming, so here you can find guides, tricks, secrets and tips so you can enjoy your games to the fullest. Are you ready to get all the achievements of that game that you resist so much? Enter now and enjoy your favorite video game to the fullest!
Monochroma Review ❯

Immortal Fenyx Rising review, the legend of a squire