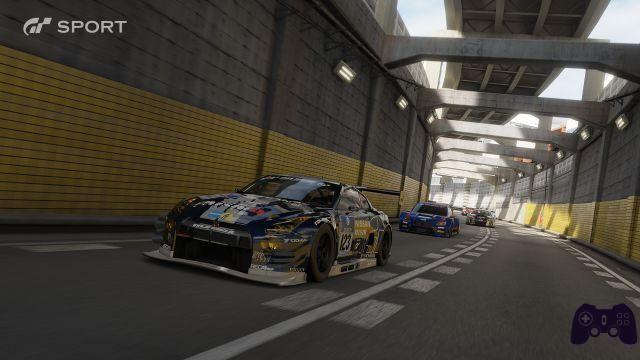 Gran Turismo is undoubtedly one of the most successful series in the world Sony, with over 75 million copies sold; since the release of the first chapter dated 1998, Sony has traced the path of driving simulations on consoles, albeit with some defects and limitations that have not been overcome even today. From virtual licenses to real driving licenses included - wait to cheer, it will not be so easy to get it -, we have arrived at this last chapter of the series: Gran Turismo Sport.

But let's go in order; during the Games Week in Milan, which took place from 14 to 16 October, we had the opportunity to try Gran Turismo Sport in a configuration ideal for the type of game, i.e. seat and steering wheel. Let's assume that the tested version is not yet definitive: it is practically the same demo brought by Sony at Gamescom in Cologne, where features such as damage were still missing (which were however announced in a press release); during the Milanese event, it was possible to test only the arcade mode, which however contained some iconic tracks, for example the Nürburgring Nodschleife and Brands Hatch mixed with tracks created for the game, one above all the Fisherman's Ranch rally.

As many of you know, at the moment the launch date of the title has not yet been defined. The only information we have is that it will happen by the end of 2017, and that it will be exclusive PlayStation 4.

“Fasten your seat belts and start your engines; your only goal is victory “. This more or less may be the phrase that goes through your head before starting any circuit playing Gran Turismo Sport. The detail quality of the tracks tested is incredible, and the work done by Polyphony on the tracks it is of the highest level as much as the one done on the vehicles; it is impressive to see how the cars have been designed to have a "physics of dirt" that borders on reality. For example, we have noticed that theAudi LMP1 included in the demo has been recreated so meticulously that even the small imperfections caused by long endurance races have been faithfully reproduced; but this is not the only aspect that strikes, since the very realization of the car brings the game closer to reality, which can be even more immersive thanks to the PlayStation VR (we'll talk about it later).

Trying the game - sporty driving seat, steering wheel, pedals and headphones - we almost had the feeling of being really on the track; the driving dynamics are so precise as to exempt the player from reality during the sessions, making him almost forget that he is playing. At this point you may wonder why the almost ... The reason is simple: at the moment, even this chapter of the series suffers from the chronic problem that afflicts all Gran Turismo, or the pinball effect. For those unfamiliar with it or new to the series, the pinball effect is the condition whereby, when you hit the barriers - whether these are guard rails or a thin plastic tape -, you will bounce like a ball without a real one. clash physics. The same thing is true if you collide with cars, which is why bank overtaking will be one of the most used moves; a real shame, in the current state of the game, especially if you consider that decent physics can now be found even in series such as Need for Speed (always with the due proportions, since in that case we are talking about a purely arcade game).

Returning to driveability, we can say that, thanks to the settings (as it was for the previous chapters of the series), you can have feedback almost similar to reality, precise cornering insertions and a response equal to the driving of your own car (with the plus to be able to increase it in the drift, in order to be able to look like the best Ken Block in one of his Gymkhane). Trying out a legendary circuit like the Nurburgring, we were catapulted into the memory of the laps we actually did while driving our car; a track that is ever closer to the original - even in the sensations it brings back -, and always difficult to remember (but in this the always useful map comes to our aid, unfortunately still absent in reality). Instead, trying the Rally circuit we had some more doubts about the performance of the guide, not yet in line with the track counterpart, but it will probably be one of the points on which he will work Polyphony before the title is issued; in some driving phases it still seems to play one of those old Rally video games with a smooth track without the classic roughness of dirt roads, but at the same time the car's reactions did not respond to what was really being done, sometimes giving the feeling of riding a runaway horse.

A separate chapter are, however, the accidents, with a physics still stopped at the first chapter, unnatural and, as already mentioned, without a real impact physics (in jargon it could be said that accidents in the game are only a series of "Bumps"). Needless to say, this is unquestionably a serious shortcoming for such a title. Sure, the developers have repeatedly, in that of Tokyo, announced in press releases a new accident and damage system; but if at this point we are still in this situation, it is very difficult for this sector to be improved. Much hope, on the other hand, lies in integration with Playstation VR (with which at the moment the compatibility has only been announced), with which a title of the genre could excel and aim for that total immersion that is still missing for games of this genre. 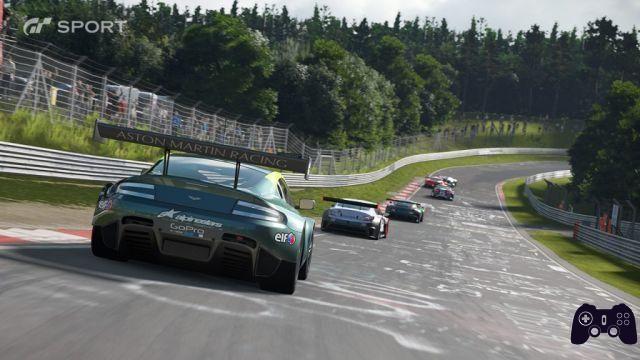 Certainly the potential of this title is very high: there is talk of a collaboration on several fronts with FIA (Intentional Federation of Motoring Ed.), Which brought the title to have 117 offline events, 137 cars (including all the licensed FIAs in the Endurance and GT championship), 19 locations, 27 layouts and seven modes (Arcade, Campaign, Brand Central, Sport Mode, Social Features, Livery Editor, Scapes), some of which are really interesting (but at the time of the test not yet usable), A large number of contents, in short, which could potentially make the game more stimulating. for purists of the genre, but also for those who not only want to drive cars, but also to customize with creativity. Absolute gem of the title, however, is the possibility of having a real License recognized by the FIA to be able to tread your favorite circuits with your 4 tires. At the moment this license is only in its embryonic stage, but 22 nations and regions have already joined and will recognize it as a valid track driving license in their circuits.

By fulfilling various requirements, such as for example passing the lessons on the racing label in the campaign mode of "Gran Turismo Sport" and reaching a certain level in the Sport mode, you will be able to obtain the "FIA Gran Turismo Digital License" from the ASN (authority national sports / automobile club). This license will have a value equivalent to that of a license obtained in real life.

Comment The release of Gran Turismo Sport still seems far away, but what we have been able to see and experience gives us hope for the quality of the game. Some overt flaws, however, make us fear that Polyphony and Sony may fall into the same mistakes that have been following us for 16 years now and that they will not make the title that leap in quality it deserves to enter the Olympus of total Driving Simulatives. However, the integration with Playstation VR and the collaboration with the FIA ​​make all four-wheel enthusiasts rejoice, thanks also to a tradition that leads from the virtual to the real, creating champions like Lucas Ordoñez, the first winner of the GT Academy. New modes and a Career that will make us really start from scratch help the title create that Hype for Gran Turismo that has been missing for too many chapters. Pros and cons ✓ Integration with playstation VR
✓ Collaboration with the FIA
✓ Interesting new game modes x No damage physics
x Flipper effect
x Continued delays in the release of the title
Do you want to be a video game expert and know all the tricks, guides and reviews for your video games ? Holygamerz.com is a group of video game fanatics who want to inform you about the best tricks, guides and tips. We offer you the best information to be a reference in gaming, so here you can find guides, tricks, secrets and tips so you can enjoy your games to the fullest. Are you ready to get all the achievements of that game that you resist so much? Enter now and enjoy your favorite video game to the fullest!
Miitomo review ❯