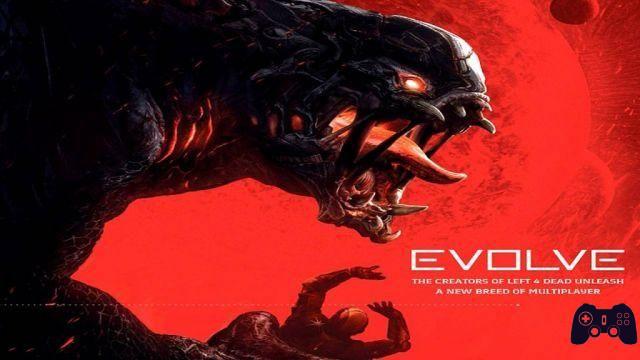 Over the recent Lucca Comics & Games 2014 we got to try a demo of Evolve, the new multiplayer shooter from Turtle Rock Studios, present at the fair at the stand 2K of the Games pavilion. So how did the new creature of the Left 4 Dead developers seem to us? In two words: very promising. But let's go in order.

Evolve's premises are simple: it is one multiplayer shooter to sci-fi setting from very strong asymmetric component. The clashes will in fact be 4 against 1. A single player will play a monster, a colossal creature with devastated power and very high resistance, while the other four will take on the role of hunters, an elite team that will have to coordinate their efforts to take down the beast. . Although more monsters are expected in the full version of the game, in the demo tested only the Goliath was available, capable of very fast movements despite its size, of breathing fire, throwing rocks and charging the unfortunate hunters who will find themselves isolated from the group. In the role of the monster, the objective of the game is reduced, in the early stages, to escape the team of opposing players, trying to feed as much as possible of the alien fauna that populates the game arenas. By doing so it will be possible to evolve to phase 2 and finally to phase 3, further increasing one's resistance and acquiring the possibility of destroying the opposing team's generator. The victory conditions will therefore be or the total annihilation of the team of hunters, or the destruction of their generator. Conversely, hunters will have to worry about chasing the monster, following its traces and environmental clues, and take it down before it becomes an undue threat for the team or for the generator, obviously also dealing with any hostile fauna and various environmental dangers. Not all hunters are the same, but each team will consist of 4 classes: an attacker, a support, a medic and a trapper. In the demo there were two different characters for each class, each with their own abilities. The role of the assailant is the simplest one: he is the "thug" of the group, the one equipped with the most powerful weapons (assault rifle and electric discharge, or machine gun and flamethrower) as well as a portable force field capable of briefly absorb the monster's attacks. The support equipment is similar, but more geared towards long range combat. The class ability allows them to camouflage themselves and nearby allies and depending on the chosen character they can call an air attack or deploy up to 5 air sentinels that will attack the monster. Trappers, on the other hand, have skills that are useful both for chasing the monster's tracks and for immobilizing it once it is found, allowing the other characters to unleash all their firepower. Finally, the doctor will have the task of healing the other characters, with an interesting variation on the theme: of the two characters available in this class, one is able to heal the companions but not to resurrect the fallen ones, while the other will have diametrically abilities. opposite. Provided that in a team there is a character for each class, players can freely choose the one that best suits their style, and despite the clear differences in gameplay it appears from the first moment how each combination has been well balanced by the development team.

Playing Evolve as a classic run 'n' gun shooter is the biggest mistake a rookie can make. Separating from your teammates, facing the monster head on alone, not communicating, are all attitudes that inevitably lead your team to defeat. Despite the first-person setting and overwhelming arsenal of firearms, Evolve's mechanics are almost reminiscent of a Monster Hunter, rather than those of a common FPS. With the aggravating circumstance that on the other side of the screen there is not an artificial intelligence, but a player in flesh and blood, thinking and lethal. For its part, the monster will not only have its terrifying strength, but thanks to a surprising mobility for its size it will be able to hide, ambush, escape, choose alternative routes, try surprise attacks. Only in the final game, when the monster is in its third stage and will presumably be directed towards the generator, will real similar pitched clashes take place and epic boss battles, with the energy of the beast going down millimeter by millimeter and tension to the stars. In the games we played, we could see a truly excellent balance between the two different types of gameplay: more or less half of the matches saw the hunters triumph, while the other half went to the player who chose to play the monster. The general feeling of the gameplay is very good, the focus on mobility is perceived, not only as regards the monster, but also for the various hunters, equipped with a rocket backpack changed directly from Titanfall, while the gunplay is also very satisfactory, with graphic effects that highlight the power of our exaggerated weapons. All obviously accompanied by a respectable graphics sector.

Comment The result of our road test of Evolve is undoubtedly positive: the game fully convinces in realizing the concept of asymmetrical multiplayer: as different are the monster and hunter gameplay as they are equally fun and balanced. During our test we witnessed breathtaking clashes, appreciating both the game concept and the actual realization. The speed, the frenzy, but at the same time also the need to set the brain in motion, to be more alert than the opponent (or opponents) make Evolve a rewarding and at the same time "new" experience for the player. There are still some obscure points, such as whether we will see the same painstaking care of balancing even with the characters and monsters that have yet to be revealed, and, above all, how the community will behave with a game entirely focused on online, given the rapid recent abandonment of other online-only titles (Titanfall docet). For now, however, the impressions remain strongly positive. Pros and cons ✓ Captivating setting
✓ Great realization of asymmetrical multiplayer
✓ Excellent balance
✓ Satisfactory movements and gunplay
✓ It forces you to communicate and use your brain x Will the balance also be maintained with future characters?
x Will she be able to keep an online community alive for more than a few months?

Do you want to be a video game expert and know all the tricks, guides and reviews for your video games ? Holygamerz.com is a group of video game fanatics who want to inform you about the best tricks, guides and tips. We offer you the best information to be a reference in gaming, so here you can find guides, tricks, secrets and tips so you can enjoy your games to the fullest. Are you ready to get all the achievements of that game that you resist so much? Enter now and enjoy your favorite video game to the fullest!
News + Videogames and Crowdfunding: when the industry really believes in it ❯