Double Cross Review - The Dimensional Guardians by 13AM Games 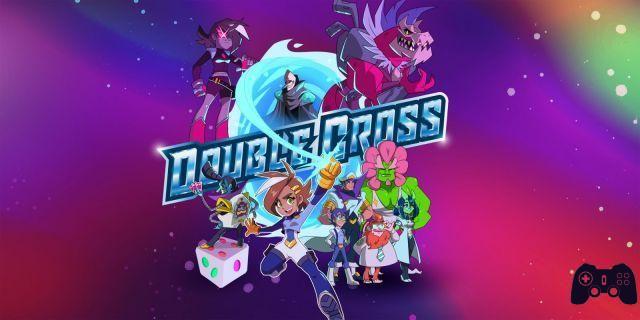 What if there was a version of you whose life turned out differently?

The multiverse lives for these assumptions. One of the top topics for geeks in late 2018, early 2019, also thanks to the latest animated feature film dedicated to Spider-Man. 13AM Games open the dance on a 2019 videogame with a multidimensional title. Double Cross will be available from today (January 10) only in digital but completely in Spanish.
Strengthened by the success of Runbow, they will be able to pay off Double Cross a new hit for Nintendo Switch and PC?

Double Cross talks about alternative dimensions, with some successful ideas but with more than one stumbling block along the way

Double Cross immediately distances itself from Runbow. If the colorful predecessor based its strength on multiplayer, binding the story to a series of stages with different objectives and a set of various and guess modes, Double Cross eliminates all the multiplayer component. A single mode, with a linear story and thirteen levels of increasing complexity. 13AM Games has certainly tried to change direction, focusing on the story, not forgetting much of the experience with Runbow. 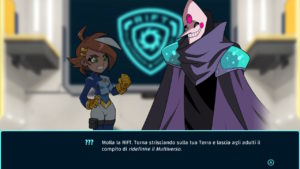 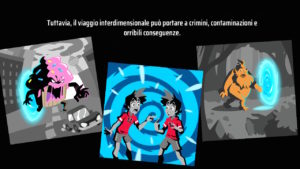 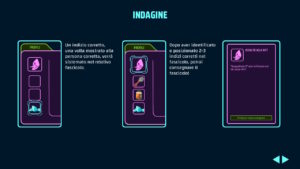 The Rift is a secret agency specializing in dimensional chaos. Agents move from one world to another and solve problems, guaranteeing peace in the various universes. Until the central base is attacked by the Smiling Mask, a masked villain who wants to destroy the Rift itself. Zahra Sinclair, the protagonist of Double Cross, will have to investigate three different worlds to undo the plans of the Mask, discover who is hiding under the disguise, and ensure the peace and survival of the agency. 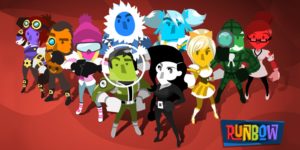 Fortunately, betting on the plot turned out to be positive. One of the strengths of Double Cross in fact, is the story, thanks also to the idea of ​​combining Zahra's investigations with the completion of the levels. At the end of each stage, you will have access to a clue, once you have enough evidence, you can start the case and reach one of the Double Cross bosses. All this by interacting with the different Rift agents, uncovering backstory and new mysteries in a sort of investigative adventure inside the central hub. The only negative in the game plot is theimpossibility of skipping a dialogue already seen, making it almost exhausting to repeat a level to complete secondary objectives. 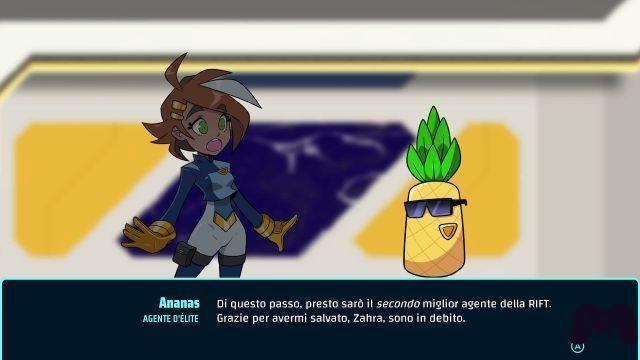 Why should I repeat a level after completing it?

Because each stage contains collectible crystals, the Upgradium, the only way to level up Zahra and learn new skills. Between active and passive powers, the Rift agent will become increasingly fearsome and unstoppable, vanquishing the dimensional enemies that the Mask will parry in front of him. Passive skills are varied, ranging from faster healing, to increasing energy for special shots, to slowing down time with each dodge. But Zahra's ace in the hole is definitely there Protonic sling.

A slingshot with which to catapult inside the stages, collect bombs and throw them back at enemies, the main protagonist of Double Cross's platform mechanics.
And it is precisely on the rebounds of the sling that Double Cross begins to trudge. Although the key mapping is clever and optimal, in a platform that requires precision it is quite alienating not being able to use the D-pad.

All this turns into deaths upon deaths due to wrong jumps or imprecise trajectories.

Certainly by dint of refining the jump, he brings home the result above all by unlocking the advanced powers of Zahra, but the march of pains did not end there. Several times during my missions (lasting a total of about ten hours) Zahra got stuck in the walls, or disappeared completely from the screen, forcing me to restart the application. Minor bugs and glitches, on the other hand, undermined other moments of the adventure, all of which can probably be solved with some corrective patches. 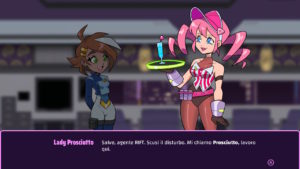 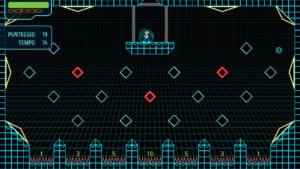 Runbow also sprinkled style under the artistic component. The changing colors that were the basis of the gameplay mixed with the stylized settings of the crazy races.

Double Cross is clearly separated from it.

The adventures of Zahra are always in two dimensions, but with a style more towards the cartoon, so much so as to wink at many Cartoon Network productions. A good adaptation (with a couple of typos) and an honest soundtrack close the offer for this new title by 13AM Games.

Verdict 7/10 Seeking a dimension without bugs Comment Ever since the completion of Runbow, the anticipation for the new title of 13AM Games had pervaded my bones. After the effervescence of the caciarone runner, however, I found Double Cross a clear step back. Few levels, glitches and bugs undermined my enjoyment. A good plot and some ideas like the investigations, however, failed to replicate the effectiveness of the previous title. Double Cross is a discreet action platformer that fails to emerge from the huge library of indie titles. Pros and cons ✓ Good plot
✓ Some successful ideas ... x ... others much less
x Inability to skip dialogues
x D-pad not usable
x Various glitches and bugs
Do you want to be a video game expert and know all the tricks, guides and reviews for your video games ? Holygamerz.com is a group of video game fanatics who want to inform you about the best tricks, guides and tips. We offer you the best information to be a reference in gaming, so here you can find guides, tricks, secrets and tips so you can enjoy your games to the fullest. Are you ready to get all the achievements of that game that you resist so much? Enter now and enjoy your favorite video game to the fullest!
Japansoft special: an oral history - The real punks are video game developers ❯