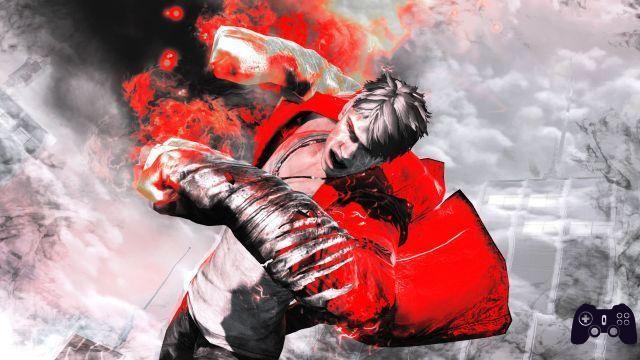 Just over two years ago, when we were reviewing DmC Devil May Cry, we nominated him for the most controversial reboot crown of the seventh generation: already on that occasion Ninja Theory had shown that he was not afraid to take the risk of "challenging" for certain verse what is the canon of the series invented by Hideki Kamiya. So let's imagine that to Capcom's proposal to create this Definitive Edition, not only the English team immediately replied "ready", but also took the ball to remove a few pebbles from the shoe by responding (as we will see) to some criticisms that rained down on the first iteration of the title, in spite of the potential criticisms due to the nature of (yet another) HD re-proposal on PS4 and One of a title that is all in all recent. Net of these considerations, how are Dante and Vergil doing in their new homes?

less Dante-centric and more “narrative”, but suffers from bosses and somewhat subdued dialogues

Having already analyzed in detail on the occasion of the original review the strengths and weaknesses of the narrative component of DmC here we will limit ourselves to a quick summary: compared to usual we are facing a Dante less "exuberant" than the one played in the other four chapters of the series, also accomplices of the dialogues overall less brilliant than what one would expect. In fact, there are some jokes and jokes by the protagonist, but in general, more than trying to justify the ticket price alone, they represent only some moments of the product, which redistributes the weights and tries to ennoble the narration too, at the cost of being less "Dante-centric". The idea itself is not wrong (also and above all because it mixes the cards on the table a little), but it succeeds in half due to the boss-fight definitely below the average of the series: with a couple of exceptions removed, these are on the whole less successful than the “normal” ones and lacking the classic insights (even sketchy ones) usually dedicated to the antagonists of Sparda's son.

All DLC released so far and Vergil's Blood Palace

From the point of view of the content offer Ninja Theory is in line with what has been done by the other "colleagues" and does not offer any unpublished content (with the exception of a few small extras), limiting itself to gathering in a single edition all the DLCs released for the title . The three skin-packs dedicated to weapons originally conceived as pre-order bonuses (Gold, Bone and Samurai), the detector for collectibles (which can be activated and deactivated from the mission start menu) and some alternative skins for the characters, included those taken from Devil May Cry 3. It is no coincidence that we talked about characters in the plural, given the presence (at this point inevitable) of the expansion "The Fall of Vergil", set chronologically after the title's ending and capable of allowing the player to take on the shoes of Dante's brother. Fall of Vergil which by the way is the only exception to what has been said so far, including a "Palace of Blood" mode also for this second playable character (unlocked once the late DLC is complete).

Ninja Theory has refined the (solid) product of last time, adding some extras made on purpose to respond in tone to the criticisms

The absence (or almost) of unpublished content, however, does not translate into an absence of novelty on the playful level: on the tested battle system of the original edition (also in this case we do not dwell too much having already examined it last time) a series of innovations which, as mentioned at the beginning, seem to have been studied ad-hoc to respond in kind to the detractors. First of all 60 frames per second, which despite some sporadic decline accompany the player from start to finish and align the offer to what could already be enjoyed in the Steam version of the title. But if the adjustment from the framerate point of view was almost a must given the computing power of PS4 and One less obvious was the insertion of manual lock-on on enemies, which bridges what in our opinion was the main flaw of the experience. Another addition of substance is that of Hardcore mode, which regardless of the difficulty level chosen to "challenge" the game will field enemies on the field more aggressive, resistant and capable of doing more damage, and together with the mode Must Style (where opponents on duty start taking damage only when the style indicator reaches S) further raises the level of production challenge. As the icing on the cake we find the Turbo Mode, which increases the overall speed of the title by 20% and makes everything even more frenetic, without practically ever losing the general fluidity. Finally, Ninja Theory did not miss the opportunity to correct some finishing errors, reducing the number of glitches present (an illustrious victim in this sense, the one that allowed you to jump to infinity, simplifying the exploratory part) and bringing on the shelves a product that summing up it is confirmed as absolutely solid and fun from this point of view.

Visually it works without surprising and acoustically we (re) are

We close as usual by spending a few words on the audiovisual aspect of the title, which from an artistic point of view (thanks also to the choice two years ago to "abandon" MT Framework and take advantage of Unreal Engine 3) is the inspired and convincing original. , although not striking if analyzed piece by piece. The soundtrack is also confirmed (also thanks to the "guest stars" Noisia and Combichrist) able to alternate tracks with a more house or dubstep flavor to songs that are closer to the tradition of the series, with the advantage of "collaborating" with the style indicator becoming gradually richer while this rises towards the maximum SSS score.


Verdict 8.5 / 10 If you still complain you are officially indisputable Comment DmC Devil May Cry: Definitive Edition lives up to its name and really proposes itself as the definitive edition of the Ninja Theory title, which while adding nothing from the content point of view enriches and refines what really matters at the end of the day when it says Devil May Cry on the cover: gameplay. If you are in possession of the Steam version, thanks to the not exactly prohibitive requirements, perhaps everything loses a bit of appeal, but otherwise it is impossible not to recommend this re-release as much to those who appreciated the original DmC as to its detractors. Pros and cons ✓ Finished and improved
✓ All DLCs
✓ New Modes and Palace of Blood for Vergil ... x ... But apart from that, very few unpublished ones
x Dialogues and bosses still subdued

Do you want to be a video game expert and know all the tricks, guides and reviews for your video games ? Holygamerz.com is a group of video game fanatics who want to inform you about the best tricks, guides and tips. We offer you the best information to be a reference in gaming, so here you can find guides, tricks, secrets and tips so you can enjoy your games to the fullest. Are you ready to get all the achievements of that game that you resist so much? Enter now and enjoy your favorite video game to the fullest!
Pokémon Sword and Shield Guides - Where to find the Regi in the Crown Rift ❯

Sunset Overdrive Review and The Mystery of the Mooil Platform!