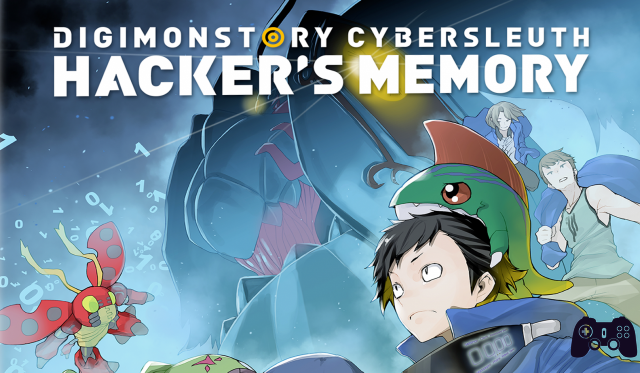 In recent years we have witnessed a real rebirth of the Digimon brand, what were once considered only the "draft" of the much more famous Pokémon.

Digital monsters have always had a different fate from that of pocket rivals, being mistreated by most due to the increased media exposure of Pikachu and companions and the extreme similarity between the two brands. Since 2012, however, a revaluation operation has been implemented by Bandai Namco Entertainment starting from Digimon World RE: Digitize, never arrived in Europe, which opens an entire trend much more mature than in the past, with all the titles connected to each other. Among these we can find Digimon World - next 0rder - and, above all, the two Digimon Stories entitled Cyber ​​Sleuth e Cyber ​​Sleuth - Hacker's Memory. The first, released about two years ago, made its arrival after a thousand requests from Western gamers and opened the new "golden age" of the brand while the second, on the shelves of stores since last January 19th, seems to be the closing of the circle started in 2012.

Hacker's Memory is a title on its own, but you need to have played Cyber ​​Sleuth

One of the most controversial points of Digimon Story: Cyber ​​Sleuth - Hacker's Memory (now only Hacker's Memory or HM) concerns its true nature: is it a sequel or not? The real answer lies in the title itself, this is because Hacker's Memory is a title in its own right with its own story but which takes place at the same time as Cyber ​​Sleuth. In fact we will find ourselves in the same futuristic Tokyo that we visited two years ago; the one where the Cyberspace EDEN, a sort of digital world that can be visited with one's avatar, is fundamental in the lives of citizens and where hackers - both the good ones and the bad ones - command together with their Digimon. In this timeline we will impersonate Keisuke Amazawa, a boy who joins the Hudie team following the theft of his digital identity by an "evil" hacker. In the eclectic group our Keisuke finds himself with Chitose - the classic guy who has bad luck with women - and brothers Erika e Ryuji Mishima. It is thanks to them that our protagonist will discover the existence of digital creatures and the possibility of being able to train them for good or bad purposes. Keisuke will venture, together with his companions, in search of the man who stole his avatar helped by K, a mysterious hacker who will give him tips on the identity of the thief, then being overwhelmed by the same plots we witnessed in Cyber ​​Sleuth, even if viewed from a different point of view. In fact, it is possible to find, right away, personalities that we were able to appreciate in the previous adventure such as Yuugo, leader of the Hacker group ZAXON is Nokia e Show, the companions of Takumi / Ami Aiba who will take on a different role and importance than in the past, giving, at the same time, a completely opposite point of view to some events and, at times, completely overturning the judgments on certain characters. In order to fully understand Hacker's Memory it is important to have played, and finished, the previous one; this is highlighted by Bandai Namco Entertainment in several ways: for example in Japan the title was accompanied by the port on Playstation 100 of Cyber ​​Sleuth and the saves of the latter gave great bonuses, in terms of items, to players based on where they had arrived in the adventure. The nature of this project is also revealed by a small easter egg: if we were to use the Cyber ​​Sleuth rescue to start our adventure in Hacker's Memory we would see the hour counter continue, instead of starting completely from scratch.

As noted several times in the previous paragraph, Hacker's Memory shares practically everything from Cyber ​​Sleuth, including the combat system. The clashes are very reminiscent of final fantasy x

Like all the titles that are part of the "Digimon Story" series we are faced with a real jrpg with turn-based battles that resemble, very closely, those of Final Fantasy X. As in the Square title, in fact, we will have a bar - here called Timeline - where to check the order of attack of the monsters on the field, the higher the speed value, the sooner our turn will come and, if we are particularly strong, we will have the possibility of attacking several times before our opponent. When the time comes we can decide whether to launch a normal attack, use one of the special moves that our Digimon can learn or whether to change it with one of the eight substitutes that can be set before the start of the battle.

One of them is the presence of weaknesses and strengths based on two factors: the type and the element. These, in fact, will determine the amount of damage that our digital monster can do (or suffer) based on particular patterns that are very reminiscent of a mixture between Shin Megami Tensei and, in fact, the Game Freak series. Three of the four types, in fact, are weak to each other according to a triangular scheme (the same as Fire Emblem, so to speak) with the existence of a neutral type (the one called Free). In addition to this we will also have to pay attention to the element of the enemy that we will be facing; in fact a Digimon of type and element completely unfavorable to ours will have the possibility of doing up to 3 times the original damage while, by studying the composition of the attacks and the various combinations, it will be possible to facilitate a fight by choosing the right monsters.
To get the Digimon you will have to fill a particular bar that will appear at the beginning of the fight which, based on our level and the degree of evolution of the opponent, will fill up more or less quickly. Once we reach the maximum we will be able to access the Digilab where we will have the opportunity to scan the data and thus obtain our little monster that will be looked after and trained in order to make it evolve and become more and more powerful. One of the strengths of Hacker's Memory is, in fact, the large amount of creatures present and to get them all we will have to spend many hours training them, evolving them and even making them regress in order to make them stronger and able to reach their maximum potential.

Hacker's Memory is the recycling fair

Hacker's Memory is a second version of Cyber ​​Sleuth and the developers did nothing to hide it. In fact, we are faced with the exact same settings and the same dungeons seen two years ago, even if it all makes sense since, in the end, we are in the same timeline as its predecessor. This, however, is also reflected in the technical performance; in fact, just like in the previous chapter, here too we will have to deal with a graphic quality that is not at the top, despite the great work carried out, and the presence of some not exactly perfect textures.

If from the graphic point of view we have some reservations, the same cannot be said of the character design, always by Suzuhito Yasuda, which even if penalized by the not exactly perfect polygonal models is excellent and in line with the desired atmosphere. Another strong point of the production is certainly the audio sector supported both by the soundtrack created by the immense Masafumi Takada which offers songs inspired by the creations - such as the last chapters of the Danganronpa series - that from the Japanese dubbing. Bad news awaits the lovers of the Spanish language, in fact, despite the great work done with Next 0rder Bandai Namco Entertainment has decided not to localize Hacker's Memory in our language, this is certainly due to the immense amount of dialogue lines present but, of course, we cannot hide a slight disappointment.

Digimon Cybersleuth Hacker's Memory - PlayStation 4
On amazon: 31,48 € buy Verdict 8/10 Digironpa strikes again Comment Digimon Story: Cyber ​​Sleuth - Hacker's Memory is nothing more than the closing of a circle that began in the "far" 2012. As can be predicted from the title of the game, this is closely linked to that Cyber ​​Sleuth that we appreciated so much two years ago. From the latter it has, in fact, inherited a well-established structure (which even derives from the Digimon Story seen on Nintendo DS) that leaves little room for innovation and novelty. The combat and development system of digital monsters is facilitated, in fact, for those who have spent tens - if not hundreds - of hours spent improving their team in the previous chapter but, at the same time, easy to understand for those who are venture through the streets of digital Tokyo. For novices it is not recommended to start with Hacker's Memory as it is closely related to Cyber ​​Sleuth, so much so that it is considered one big game - in Japan they were also sold in bundles - but we would recommend both to anyone who appreciates Japanese RPGs and Digimon. Pros and cons ✓ Classic combat system but it works
✓ Music of the highest level
✓ Interesting and Cyber ​​Sleuth related story ... x ... maybe too much
x Only in English
x Graphically improved

Do you want to be a video game expert and know all the tricks, guides and reviews for your video games ? Holygamerz.com is a group of video game fanatics who want to inform you about the best tricks, guides and tips. We offer you the best information to be a reference in gaming, so here you can find guides, tricks, secrets and tips so you can enjoy your games to the fullest. Are you ready to get all the achievements of that game that you resist so much? Enter now and enjoy your favorite video game to the fullest!
Bayonetta Review is the ideal video game ❯