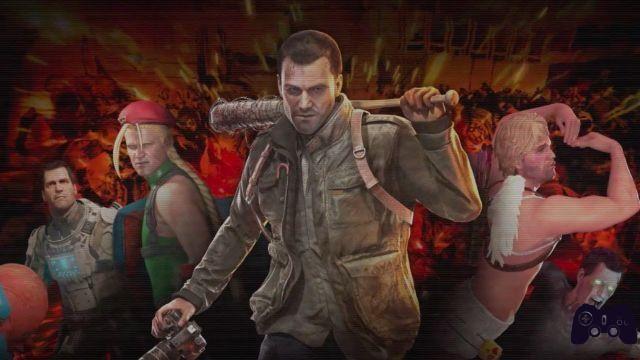 Frank West arrives on PlayStation 4 a year later, bringing his "big package" just in time for Christmas. What's in the box? Well, there is Dead Rising 4, with all the pros and cons that goes with it.

Needless to go around it: if Dead Rising 4 hadn't impressed you a year ago - if the idea of ​​putting on Frank West's old clothes hadn't sparked the impulse to buy Xbox One - Dead Rising 4: Frank's Big Package it won't make you change your mind. Because the backbone is necessarily that of the title we examined last winter, and the final response recorded a fourth chapter which, Frank West aside, did not have so many points of contact with its progenitor. Over the years, Capcom has transformed the series from action-packed survival horror to a increasingly concentrated blender of gore, gratuitous violence and contents between the absurd and the referential meta, then pulling the rope often and willingly when it came to expansions: later Super Ultra Dead Rising 3 Arcade Remix Hyper Edition EX Plus Alpha we could only continue in that direction, and Frank's Big Package is the perfect son of it. Less noisy, but still self-celebrating and heart-pounding for the fans of the IPs who were from the Osaka house.

For the benefit of all those readers too lazy to click on the link to the review of Dead Rising 4 in the "vanilla" version, we quickly summarize the narrative assumptions of the title - which certainly do not occupy a preponderant slice of the playful package, but so be it. As mentioned, we return to play the role of Frank West, setting aside all attempts to expand the horizons of the series through the use of other protagonists, and you go back to where it all began (that is to Willamette, the scene of the events of the first chapter of the saga). Frank is no longer a freelance reporter, but has become a university professor haunted by that dark past that made him famous: a past that stretches its tentacles through the present, when one of his students makes him smell yet another great story. . It seems that in a secret military base the government is conducting experiments on zombies right in Willamette ... We warned you, surely it is not a background that breathes revolution and new ideas, but after all, he didn't even want to be: Dead Rising 4, ideally, wanted to try to "mend" the series together, transporting Frank West into the context that the subsequent chapters - and in particular Dead Rising 3, an Xbox One launch exclusive (and still not available beyond outside the Microsoft ecosystem) - they had put to a vote, approved and finally set up. You may or may not like this bad habit, but the focus is on character and irony (also on self-irony, as we will see) seasoning everything, as desired, with some homage, rather than on the narration in and of itself. In short, we began by saying that if you had not come on board a year ago, you will hardly change your mind with Frank's Big Package… And there isn't much more to add in this sense.

There is, of course, something on which you can spend a few new words - and of course we allude to the contents that have actually been added posthumously to the play package. Frank Rising, the actual expansion of Dead Rising 4, connects to the campaign finale and expands its story, making some changes to the gameplay (well justified by the plot) and enriching the offer in this sense. From this point of view, however - since it is what should be the main novelty of the whole - let's keep our mouths sealed so as not to spoil the surprise, and on the wave of the mood of the series we prefer to focus on the “lighter” contents of this re-release. The Super Ultra Dead Rising 4 Minigolf mode, which goes to insert the great excluded from the basic package - the cooperative - introducing a mini-golf mode (it had not been guessed) to be played with a friend in which you should aim to hit the hole with as few strokes as possible, but in reality soon the idea is abandoned in favor of violence and fooling around carefree offered by the new playful elements, the exoskeleton above all. But there is also something more aimed at replaying the campaign to those who had, by chance, already faced the experience for the first time: the Capcom Heroes mode adds in-game the possibility of having Frank impersonate, for a certain time, some of the most iconic characters of the Osaka house. Joe from Viewtiful Joe, Mega Man (could he be missing?) Dante directly from Devil May Cry - sadly, from the Devil May Cry that everyone liked except the writer, that is 4 - and even Amaterasu directly from our #GameCover, Okami . Here inevitably falls a veil of sadness for all those Intellectual Properties that now seem be confined to cameos of this type (in the case of Amaterasu and Joe it is not even the first time, since both were included in the "expanded" roster of Ultimate Marvel vs. Capcom 3), but it cannot be hidden that the experience pad in hand is damn funny and tremendously over the top. It is the new course of Dead Rising, as we said, and if you have to get over it you might as well do it by holding Rebellion and killing zombies with a white wig and duster.

The ugly wax of the undead

A new course that, as usual, does not shine too much from a technical point of view. As solid as the performance is, there is no shortage of flaws when looking at the interpenetration of polygons and glitches of various kinds, from the softer ones that afflict the sound to those that are closest to "breaking" the game, which although it does not crash and send those who play on the dashboard sometimes obliges a restart from the checkpoint to unravel the problem. Nothing new under the sun, then: it is a bit the leitmotif of this review, on the other hand.

Dead Rising Franks Big - PlayStation 4
On amazon: € 29,99 buy Verdict 7.5 / 10 Package without surprises Comment We really don't know what else to add. Dead Rising 4: Frank's Big Package does exactly what it was expected to do, and does not revolutionize the core experience of the title - indeed, if you are strongly opposed to the new course of the series, as far as you are concerned it probably even makes it worse, given who overdoes it with tributes and fun. But in fact, it exaggerates with the tributes and the fun, so if you were going to get on board the opportunity is definitely greedy, on PlayStation 4. ✓ It's Dead Rising 4, bigger and bigger
✓ Capcom Heroes adds a lot of fun x It's Dead Rising 4, bigger and bigger
x Usual technical flaws, a year later

Do you want to be a video game expert and know all the tricks, guides and reviews for your video games ? Holygamerz.com is a group of video game fanatics who want to inform you about the best tricks, guides and tips. We offer you the best information to be a reference in gaming, so here you can find guides, tricks, secrets and tips so you can enjoy your games to the fullest. Are you ready to get all the achievements of that game that you resist so much? Enter now and enjoy your favorite video game to the fullest!
Resident Evil 7: Banned Footage Vol.1 review ❯