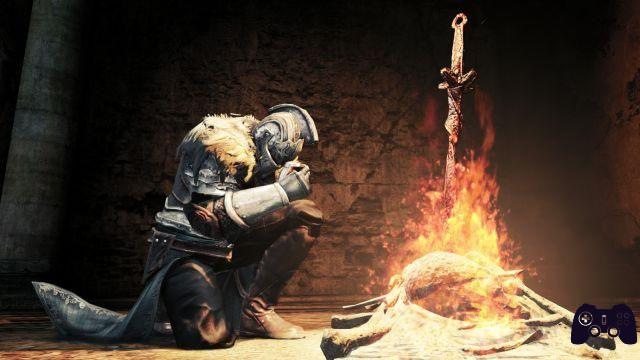 The curse that struck me has now completely corroded my body, making me look little more than a walking corpse ... Even my mind, by now, is more and more often at the mercy of my most primitive and aggressive impulses; I struggle to remember the myself of the past. One evening, in a glimmer of lucidity, I found myself sprawled on the floor of a tiny stone temple; dressed in a few rags and without the slightest idea of ​​the time elapsed since my last coherent thought. I used all the strength of that weak body to stand up and began to observe the environment around me: I saw nothing but a dark cave with a wide vault, illuminated only by a light that filtered through a crack and that called me to him ...
And that's how I began my journey, the path of the damned ...

Once again, a majestic kingdom that has now fallen into disgrace welcomes us to its lands.
After the moors of Boletaria of the first Demon's Soul and Lordran introduce us in Dark Souls, in Dark Souls II our job will be to explore Drangleic and the vast and varied territories of this great island.
From the first second of the game, even before creating the character, we are immersed in the evocative scenarios and light effects that the title of From Software introduces us, and shortly after the tutorial area, once we get to Majula, the new incarnation of the beloved Nexus concept of Demon's Souls, the beauty of the scenery that presents itself to the eyes of those who play almost takes your breath away. A sense of wonder that you feel several times as you explore the vast game world, so large that it immediately becomes necessary to be able to teleport between the various bonfires lit by the player. The only downside to the high number of locations and their variety is that sometimes parts of an area may seem uninspiring, and longtime players may feel a sense of deja vu in some. places, even going so far as to call certain areas as "The New Version" of a place from one of the previous games. This sense of deja vu unfortunately also makes itself felt with a handful of the varied characters that populate the game world., and that more than once will accompany us on our travels.

A great middle ground with many improvements

From a gameplay point of view this game is the perfect child of its two famous relatives, and many mechanics seem to have taken inspiration from the best of both, even making some innovative changes that revolutionize, sometimes significantly, the gameplay.
As for the equipment, for example, there will no longer be two slots per arm, but even three, so that we can equip ourselves at best for every situation without having to give up having a tactic ready for any eventuality, and it will not only be possible to hold the primary weapon with both hands, but even the secondary one, in order to transform a simple shield into a very resistant protection capable of saving us in critical cases. Another very interesting addition is the possibility of equipping four rings, a very useful introduction due to the fact that often the pacts (or Covenant) to which we could bond will require you to wear a ring in order to take advantage of its benefits.
Other important changes reside in the spells, which despite having a limited number of uses as in Dark Souls, now have charges that can not only be restored through the use of special consumables, but as our "will" parameter increases, each parchment of spells will provide us with more and more casts. To compensate for this change in favor of spellcasters (who once finished the best spells were essentially helpless), each cast will consume the stamina bar, and after a certain number in a row we would have to stop to regain energy. These and other game variations (such as small summon stones, which allow you to assist another player for a limited time) provide for this title a game formula that might seem more facilitating, considering also that with certain rare objects it is possible to reassign the characteristics, but which is overall more complete and varied.

The enemy of my enemy is still my enemy

Do not think, however, that these facilities have made the title suitable for anyone, the game remains the same somewhat brutal, and any mistake can end with the loss of part of our humanity..
In fact, retracing the steps of the progenitor, dying as a human being we will become empty beings, and each subsequent death will bring us more and more on the path of the undead, forcing us to play alone with maximum life points that are reduced more and more each time, until they find themselves forced to play with 50% of their health. So no more humanity that can be accumulated, but by exploiting a human effigy we could summarize our appearance, and with it the possibility of attracting other players to our world. But not all players will be ready to help us, in fact as in the previous chapter there is a pact of "dark invaders", whose purpose is to destroy the lord of the invaded world. As if that were not enough, in a couple of optional secret areas there is a pact that is very reminiscent of the guardians of the forest, who will then invade us in an attempt to block our advance, up to a maximum of 2 at a time. If at the same time we were to be invaded by 2 dark invaders we would find ourselves having to face 2 teams of 2 people, who not only have to try to kill the master of the world, but must also prevent the other team from killing him first!

Leaving aside the other numerous gameplay changes, it is worth noting to underline the excellent work done by From Software in improving the game engine, which is particularly noticeable in the care of the clothes and shadows present in the game, enhanced above all by the possibility of using a torch to light the various braziers present in some of the darkest areas of the game. As usual, the atmosphere is very well rendered by the splendid music and the usual splendid landscapes to which From Software has accustomed us, which allow from the highest points to see the entire game area and even those surrounding (a bit like it happened in Dark Souls, where if you last died in Lost Izalith, you could see your bloodstain from the tomb of the giants).

Verdict 9/10 Charm, satisfaction, anger and happiness are Dark Souls II Comment Overall, therefore, we evaluate this title very positively, a splendid experience that has allowed us to venture among the most disparate lands of this kingdom, to discover the its darkest secrets protected from the deadliest enemies you might expect to find yourself fighting with. And the game plot, cryptic as usual, was revealed to us not only by a good number of well-characterized NPCs, but also by the meticulous descriptions of the various objects scattered around the game world. Dark Souls II is just that, it is the charm of exploration, it is the satisfaction of every progress, it is the anger of every death, it is the heady happiness of a major victory, this whirlwind of emotions mixes to produce a fantastic experience, and are you ready to die to live it? Pros and cons ✓ Evocative setting
✓ Improved in all respects
✓ Facilitations for playing online with friends, including voice chat x Sporadic senses of Deja Vu
x Generic facilitation
Do you want to be a video game expert and know all the tricks, guides and reviews for your video games ? Holygamerz.com is a group of video game fanatics who want to inform you about the best tricks, guides and tips. We offer you the best information to be a reference in gaming, so here you can find guides, tricks, secrets and tips so you can enjoy your games to the fullest. Are you ready to get all the achievements of that game that you resist so much? Enter now and enjoy your favorite video game to the fullest!
News Super Neptunia RPG: information and images ❯