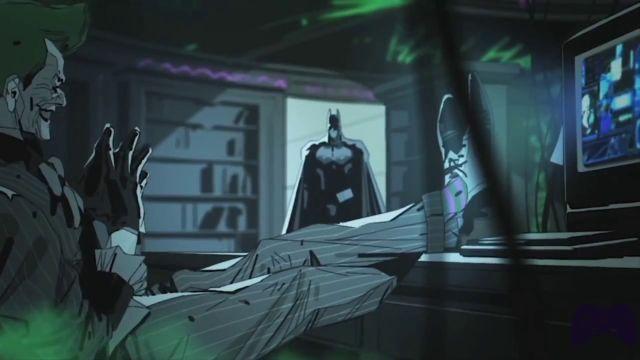 In this videogame generation, the batman protagonist of most of the DC Comics comics, is back in the limelight also in video games: thanks to the Arkham series, conceived by Rocksteady and then taken over by Warner Bros. Games Montréal, Batman has been able to enchant both comics and movie lovers, with action-packed and adrenaline-pumping games.
Simultaneously with the third installment of the series (Batman Arkham Origins) which is the prequel to the previous two (Arkham Asylum and Arkham City), a portable spin-off is released, for PS Vita and 3DS, by Armature Studio, which boasts al it includes three former members of Retro Studios, creators of the Metroid Prime trilogy for Game Cube and Wii.
Batman Arkham Origins Blackgate (from now on only Blackgate) breaks out of the classic gameplay of the series and presents the adventures of the bat man in a metroid-vania full of surprises.

All the events of Blackgate are placed temporally three months after the events narrated in Arkham Origins, so even this portable chapter is to be considered a prequel to the two Rocksteady games.
Blackgate narrates the first meeting between Batman and Catwoman, juggling the entire title on the relationship between the two, setting the whole adventure of the bat in Blackgate prison, precisely.
Black Mask, Penguin and Joker, have each taken possession of a wing of the prison, causing riots and endangering the good guards of Gotham: it will be up to our hooded crusader to save the hostages and stop the shady plans of the three bosses, in order that the player will want, unlocking the beauty of three different endings, depending on which enemy we face last.
There will be clashes with other DC Comics characters, such as the gargantuan Solomon Grundy, or the deadly Deadshot, who will get in the way between Batman and his target.
Blackgate can be completed in about seven hours, most of which will pass by running from one point to another on the map and getting lost in the game areas; the lifeblood of the title is certainly backtracking, which will increase the duration and replayability of Blackgate: to unlock the bonus costumes of the bat man, we will have to collect the various collectibles scattered around the prison; there will also be clues for detective cases that will surround the main story.
The whole plot does not have great twists but remains enjoyable, with the inevitable final cliffhanger after the credits that will please the most hardened DC Comics fans.

… There was the prison

As mentioned at the beginning of the review, Blackgate deviates from the classic gameplay of the Batman series, to dive into Metroidvania, that is the genre inaugurated by the Metroid 2D and the post-Symphony of the Night Castlevania that allowed the player to explore a vast game map and retrace your steps after gaining new powers to unlock previously unavailable roads.
In Blackgate we will have to look for Batman's gadgets to make our way through the four large game areas, in the meantime meeting some henchmen devoid of any form of intelligence, who will only see us if we place ourselves within an inch of their nose.
The combat system is similar to that of the main series, although reduced to the bone and deprived of any combo: with square you will attack and with triangle you can counterattack the opponents, circle will serve to stun them, while pressing X twice Batman will dodge, rolling on the floor .
While accumulating several hits in our chain, we will not have the multiple finishers of the main series available, thus reducing the fights to pure buttonsmashing.
Even less rosy is the stealth part, where we will have only three choices, hang the unfortunate criminal on the ledge, give him a flying kick or execute a Silent KO behind: as already mentioned, the enemies are almost lethal stupidity, and they will discover you just in case you dance in front of their guns.
An excessive ease that could have been better calibrated, but which fortunately is less present in the battles with the bosses, which are so simple but not as elementary as the rest of the game.

As in the home chapters, also in Blackgate there is the detective mode with a small addition: by touching the touch screen, we will be able to analyze the environment, finding clues for secondary cases or elements sensitive to Batman's gadgets.
If it is enough to analyze the three categories of criminals' objects once by type, to always have them highlighted when you use the bat-arang to destroy them, the same will not happen with environmental elements such as walls, doors or grates; these will be analyzed when we enter the area for the first time, in order to use the suitable gadget and continue in the mission of the bat.
The whole process is boring in the long run, especially in the final timed stages, where every second could prove to be precious. A small flaw that does not destroy the title but undermines the fun and variety.
To find the clues of the secondary cases, you will have to sharpen your eyes and touch everything that seems suspicious to you, fortunately the objects to interact with will be shown in different colors in detective mode.
All the collectibles, including secondary cases, are shown on the map of the prison: unfortunately this is confusing and chaotic, difficult to decipher until the paths of Blackgate are learned by heart, finally becoming only a way to confirm the direction we are taking.

The verse of the bat

The Blackgate graphics department features curated polygonal models for the main characters, and rearranged skins from the home chapters for the secondary henchmen; the whole game map, on the other hand, is structured in 2.5 D allowing Batman to move only left and right, but at the same time the hooded crusader will move in all other directions, thanks to an active camera that will change the frame.
Before each important event we will be shown an animated scene with cartoon drawings, sequences that are pleasant and the real entertainment of the whole title for fans of the dark knight; all completely dubbed in English and subtitled in Spanish, even if some choices of the adaptation do not respect the official Spanish terms.
The Blackgate soundtrack instead follows the most famous themes of the Arkham series and proposes them with some new facets; Unfortunately, although these are suggestive while accompanying the adventures of Bats, isolated from the rest of the game they are easily forgotten.


Armature Studios presents us with a good metroid-vania and a fun spin-off of the Arkham series, an excellent stopgap in the waiting for the new main chapter of the series, but which can still be improved in several respects.

Verdict 7.5 / 10 Er yes sorry, I'm lost Comment Batman Arkham Origins: Blackgate presents us with a good variant of the classic gameplay of one of the best series of the generation, and although it is not without flaws, such as the lack of longevity and a completely review, is appreciable for fans of the genre and for those who love the dark knight. Pros and cons ✓ Excellent animated interludes x Below average enemy AI in the series
x "Indecipherable" map
x Interaction system with the environment to be reviewed

Do you want to be a video game expert and know all the tricks, guides and reviews for your video games ? Holygamerz.com is a group of video game fanatics who want to inform you about the best tricks, guides and tips. We offer you the best information to be a reference in gaming, so here you can find guides, tricks, secrets and tips so you can enjoy your games to the fullest. Are you ready to get all the achievements of that game that you resist so much? Enter now and enjoy your favorite video game to the fullest!
Destiny 2 Special, an introductory guide on how to get started ❯