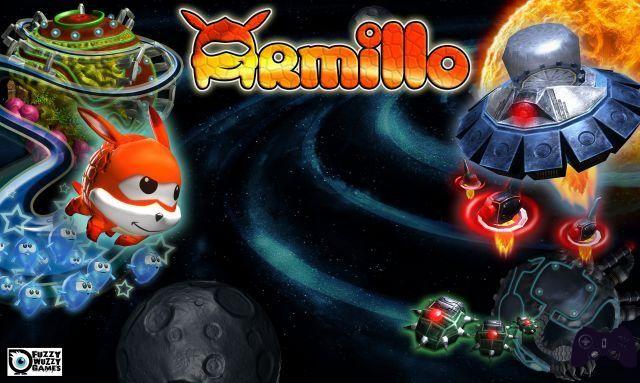 The Nintendo eShop, as we have already seen on other occasions, is now becoming more and more populated with titles that combine a generous dose of fun at a reduced price. Fuzzy Wuzzy Games with Armillo tries to include another of these titles in the Wii U digital catalog, choosing to follow a path practically at home when it comes to Nintendo: that of the platformer. Will Armillo succeed in the difficult task of living up to this tradition?

Are you a weapon? Say that…

On the narrative front, in line with what we are usually used to seeing in a platformer, the events serve as a mere pretext to set the scene for the adventures of the orange armadillo: the protagonist's home planet is in fact attacked by the evil Darkbots, who intend to drain its resources and then move on to consume the next planet. Armillo's aim will be to get rid of this threat and at the same time save his brother, kidnapped by these technological shady characters.

The references to Mario Galaxy and Sonic the Hedgehog are obvious, but they hide an original and old-fashioned soul

Videoludically speaking, as mentioned, Armillo presents itself as a three-dimensional platformer, drawing heavily from the present and remote past of series that have made the history of the genre. At first glance it is in fact impossible not to notice the references to Mario Galaxy from the point of view of level design (with each of the levels made in the shape of a planet as in the Plumber's Wii title), as the similarities with Sonic the Hedgehog cannot escape. , from the spin dash to the “on tracks” setting of the senaries. The end result is therefore a sort of "illegitimate child" of these two worlds, which finds its identity and a certain soul in the way in which the characteristics of one and the other series are mixed and above all in a damn old school approach, which sees the presence of "fallen nobles" such as lives and an indicator of the number of damage the armadillo can take. So a badly calibrated jump or an action too superficial too much is enough to be forced to have to start over from the nearest check point or worse to incur the game over.

The many faces of the armadillo

The variety of situations is certainly not lacking, also passing through the two dimensions

On this playful infrastructure there is then a decided variety of game situations, which allow at each level to vary the formula in some way and to avoid the risk of repetition: pieces typical of the genre alternate with puzzle phases (to be honest, never too complicated) which then leave room for more "shooter" sections in which, equipped with a rifle or a laser, the aim is to get rid of enemies and obstacles and to the phases in the parallel dimension, which take up the “basic” platform matrix but differentiate it thanks to the presence of a maximum time within which to find the exit portal. There is no shortage of collectibles and a "coin" system to be spent in the shop to buy new skills for Armillo (which in turn can be used in the older levels to complete them 100%, inserting a certain backtracking and meeting more players. completists), as well as a series of secret levels unlockable in each main level (boss battles excluded), able to further vary the formula presenting themselves as two-dimensional levels with a brazenly more “vintage style””, With the complicity of the background sound and the style chosen in terms of design.

Dark Side of the Moon

Unfortunately, not all that glitters is gold and, probably due to the limited budget available to Fuzzy Wuzzy Game, it is above all the technical component of Armillo that pays the price:


Technically it is not at the top, but it is forgiving in terms of sound

in addition to a fairly raw visual realization and certainly in the shade compared to the general quality of the title, the game engine also suffers from a few too many slowdowns, with real freezes in some circumstances capable of eclipsing the experience a little (and absolutely unjustified given the graphic rendering of the title). On the other hand, happier words can be addressed to the sound accompaniment, on the whole punctual and successful and able to indulge even some high notes in the two-dimensional secret levels, which thanks to the acoustics become real leaps into the past.

Verdict 8/10 The incestuous son of Sonic and Mario Comment Fuzzy Wuzzy Games, although at a first (and superficial) glance it draws a little too shamelessly from more noble products of the genre, with Armillo it packs a platform in its original way and from the "old school" soul, able to please everyone thanks to the variety of game situations and the "sops" thrown at 100% fanatics at any cost. Too bad that to partially spoil the party is not so much a subdued visual rendering as a game engine that goes apnea and struggles to "keep up" with what happens on the screen. Pros and cons ✓ Successful and "classic" gameplay
✓ Lots of variety
✓ Low price x Graphically not at the top
x Some fluidity problems

Do you want to be a video game expert and know all the tricks, guides and reviews for your video games ? Holygamerz.com is a group of video game fanatics who want to inform you about the best tricks, guides and tips. We offer you the best information to be a reference in gaming, so here you can find guides, tricks, secrets and tips so you can enjoy your games to the fullest. Are you ready to get all the achievements of that game that you resist so much? Enter now and enjoy your favorite video game to the fullest!
Battlefield 1 review ❯

Stick It To The Man Review