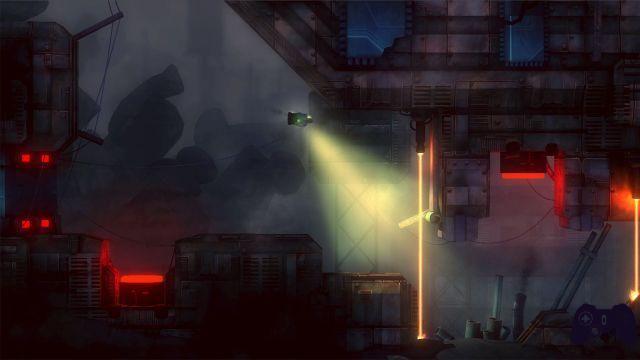 Thanks to Nintendo's openness to independent developers and the relative ease of programming, Wii U has become fertile ground for a number of indie titles in recent years, some brought directly from the PC world or from other consoles, others made exclusively or on a temporary basis. Despite the generic high quality level of the indie offer on Nintendo eShop, it is rare to come across a title designed in such a way as to exploit the peculiar characteristics of the GamePad of Wii U, and above all to do it in an organic and credible way, not forced, creating an experience possible only on the flagship console of the great N. The title we are talking about is Affordable Space Adventures, born from a collaboration between KnapNok Games (Spin The Bottle: Bumpie's Party) e Nifflas (NightSky, Knytt Underground). Changing the experience from the former with unconventional control systems and gameplay systems that force verbal interaction between players and from the latter the taste for adventure, mystery, exploration and atmosphere, Affordable Space Adventures is one of the very few titles that can show gameplay experiences only possible on Wii U, thanks to the unique control system created by Nintendo.

Welcome to the era of space exploration

From the very first minutes Affordable Space Adventures strikes for the maniacally curated presentation and for the originality of the atmosphere. The player is greeted by an intro made as a commercial. We are in the era of space exploration and the Uexplore company offers an incredible offer: the possibility of renting a cheap but reliable carrycot and to become space explorers for three days, a sort of proletarian vacation to the adventure of the future world. The advantages seem to be many: the planet chosen for exploration is portrayed as a new earthly paradise, free of dangers; Uexplore boasts the distinction of not having recorded any accidents in long years of activity and the participants will have the opportunity to claim a plot of land on the planet, if in the three days available they will be able to map the area assigned to them. Too good to be true?

Actually, things will not go the right way, and after the terrible crash of the Uexplore cargo ship we will find ourselves the only survivors, aboard our Small Craft shuttle, which turned out to be a real "space cart". Even the planet Spectaculon, initially presented as safe and harmless, will actually be full of dangers, and what was supposed to be an exciting but ultimately controlled and sweetened experience will become a real survival adventure, with the sole purpose of succeeding. to bring the skin back home. The plot of Affordable Space Adventures, which perfectly blends humor and a sense of mystery, is almost entirely narrated through the gameplay, environmental clues, messages and manual pages of the Small Craft that are presented during the uploads. It is an intelligent and non-invasive way to propose a story to the player, which succeeds in making him feel even more immersed in the game.

Immersion is clearly the keyword that the developers of Affordable Space Adventures had in mind when making the game. The GamePad screen maps what it should be the Small Craft control panel, with all its controls and sensors. The shuttle, initially severely damaged by the crash, is capable of self-repair, and as we proceed we will have access to additional systems and functions. We can use a combustion engine or an electric one, a flight stabilizer, a mass generator, several landing gear, torches, sensors and so on. These functions may come turned on, regulated or turned off from the player in real time, and will prove to be fundamental for overcoming the numerous environmental obstacles offered by the game. We will also soon discover that Spectaculon was also the crash site of an alien mothership, which occurred 150 years earlier. As a result of this the planet is teeming with alien probes and automatic drones, perpetually set in self-defense mode. The probes will react to our presence and will attack us mercilessly: not providing any active combat component, the game will therefore force us to evade enemy attacks. Particular importance in this phase will be the management of the various on-board systems. Using the scanner it will be possible to discover the sensitivity of each alien artifact: some will be activated by heat, others by electricity, others by sound.

We will therefore be engaged in real sessions of navigation and multitasking puzzle-solving, which will force us to deactivate and activate this rather than that other on-board system, in the hope of overcoming the threatening alien probes unscathed. The progression of the game is studied in an optimal way and we will find ourselves in front of it always new and creative situations, full of challenge but absolutely within everyone's reach. The mix of tension, a sense of mystery and humor make the Affordable Space Adventures solo experience absolutely fantastic and one of a kind, alone capable of justifying the existence of the game.

"Engineer, give me more power to the auxiliary engine!"

However, a very important component of the title is multiplayer. Here 2 to 3 players can participate in the same adventure seen in singleplayer, dividing the tasks. The player who uses the GamePad will have the control of engines and various auxiliary systems, while the other two players, using a Wiimote or a Pro Controller, they will respectively have to control the movements of the ship and the direction of the torch and scanner (in the case of only two players, the second will assume both of these roles). While the core adventure remains the same, it's impressive to see how the rules of the multiplayer game completely change. If in singleplayer immersion and tension are the masters, in multiplayer the emphasis is all on collaboration and cooperation between players. In fact, a fair amount of coordination and training will be required to face the many challenges trust in their mates. The game forces the various participants to communicate and collaborate with each other, making the multiplayer experience exhilarating and exhilarating. In both single and multiplayer the adventure lasts from 5 to 8 hours, contains a fair number of puzzles and scenarios and never seems forced. If we really wanted to find a flaw, this could be the lack of collectibles, alternative modes, or other measures that encourage replayability, also given the not modest price (for an indie) of € 18,99.

The presentation does its part

From a technical point of view, the game comes with a solid 2D realization, enriched by a captivating and spot-on graphic style. The use of dark colors and shadows, as well as providing justification for the game mechanics connected to the flashlight, help to generate atmosphere and sense of mystery, enriching the feeling of the title.

The presentation of the game is also excellent in the little details like the controls on the GamePad screen, which mimic those of the hypothetical Small Craft control panel, or as in elements such as the initial fake commercial or the Small Craft manual pages, which contribute to giving credibility and fascination with the game universe. The only flaw, if we want, is theexcessive duration of uploads between one game section and another. The sound sector, on the other hand, abandons the background music for a series of ambient sounds and noises that are well suited to the game atmosphere: an uncommon choice, but which in this case turns out to be decidedly guessed.

Verdict 9/10 Space adventures for all budgets ... or almost ... Comment They made it. KnapNok Games and Nifflas have also succeeded where Nintendo had failed so far. Making a game that demonstrated the potential of the GamePad in an organic, not forced way, and that was therefore only possible on Wii U. Affordable Space Adventures is a title with charm and studied in a very intelligent way. It contains both an excellent singleplayer experience, based on immersion and a constant sense of fragility and tension, and an excellent multiplayer component, which thanks to the verbal interaction that is created between the players is exhilarating and hilarious. Whether you face it in one or the other mode, the game offers half a dozen hours of high quality gaming entertainment, almost able to justify the high price of the title, perhaps its only real flaw. The new flagship of the Nintendo eShop of Wii U, without a doubt. Pros and cons ✓ Excellent atmosphere and meticulous design
✓ Take full advantage of the GamePad
✓ Different but equally great experiences in single and multi x Slightly long uploads
x High price for an indie
Do you want to be a video game expert and know all the tricks, guides and reviews for your video games ? Holygamerz.com is a group of video game fanatics who want to inform you about the best tricks, guides and tips. We offer you the best information to be a reference in gaming, so here you can find guides, tricks, secrets and tips so you can enjoy your games to the fullest. Are you ready to get all the achievements of that game that you resist so much? Enter now and enjoy your favorite video game to the fullest!
Disney Infinity 2.0 Review ❯

Cadence of Hyrule review: exploration to the beat of the beat!