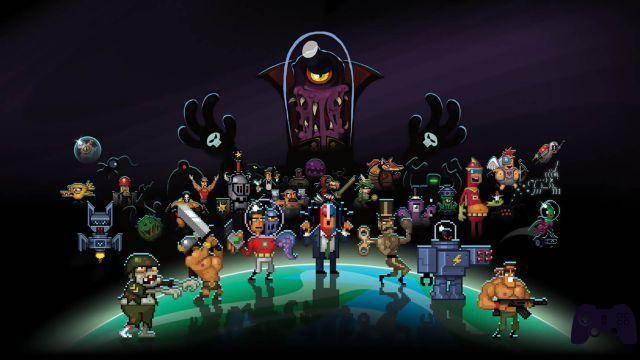 They had called the best, but the best were busy.

2017 has shown us that arcades are still alive, albeit in alternative forms, and can entertain us in the same way as the most famous titles. The independent market thought about it, to give us this lesson, with a never too praised Gridd: Retroenhanced, passing through big names like WipEout, the Arcade are still alive and ready to tell us theirs. And the Nintendo Switch eShop is slowly filling up with many exponents of the genre, not least 88 Heroes, which arrives on the hybrid platform of the Kyoto house in its 98 Heroes version, available from last 12 October at 29,99 € and from December also in retail format. Let's find out if the title developed by Bitmap Bureau and distributed by Rising Star Games was worth our time.

The plot of 88 Heroes is very simple: on August 8, 1988 at 8 and 8, the evil Dr 8te decided that if he is not given 88 octolions of dollars within 88 minutes he will blow up the earth with 88 thermonuclear warheads. Holed up on the 88th floor of his building, the evil criminal seems relentless, luckily there are 88 Heroes ready to risk their lives to stop him. 88 Heroes is all here, or rather, this is the pretext to send our army of brave heroes to death, whose deeds we will be able to see from the shoulders of Dr. 8te himself, on a special mega-screen. Each level will require us to reach a door within 88 seconds, taking advantage of the peculiar abilities of the heroes and reaching every 22 floors of the mini boss fights with Dr. 8te. The heroes, however, are not invulnerable, and if they are hit by any obstacle they will die leaving room for the next one, to bring them back to life it will be necessary to collect 88 coins. The object of the game is to reach the eighty-eighth floor in maximum eighty-eight minutes.

An idea as brilliant as it is unhealthy: the last remaining hero is in fact destined to keep trying until the end of time / reaching the 88th floor, causing hysteria especially in the last areas given the not too useful skills of some characters. The other great feature of 88 Heroes is obviously the powers of the heroes. Weird and useless powers like throwing a Frisbee or a basketball, or being a tiny flea capable of making huge jumps, a blob that stretches at will or a girl who shoots portals for teleportation. In the chaos of heroes pop culture references such as medieval ninja armadillos live, and the ten extra characters taken from other productions such as Rusty from SteamWorld Dig and Conga Master from Conga Master Party. 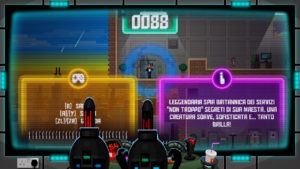 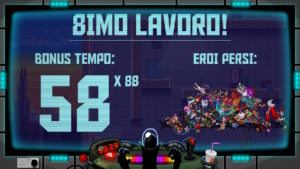 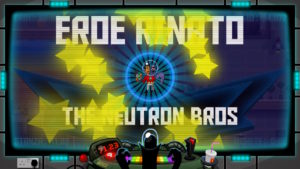 Every time a hero enters the scene, the title will give us a brief incipit of commands, not enough to make us immediately get carried away with the powers and the first games will turn into free carnage. Not only that, many powers are not suited to some level design choices and to as many obstacles such as flames, poison, blades and other tools of death, causing the premature end of the character. Therefore, although the heroes are diversified from each other, the levels do not allow them to be exploited in equal measure.

In addition to the story mode, Bitmap Bureau puts on the plate three other challenges, all unfortunately similar to each other: in The Magnificent 8, we will have only 8 characters available (and we can choose them from the cast), Solitaria obviously puts us in the shoes of only one hero (with 88 lives) while Mode H8 drastically reduces the number of levels (8) but significantly increases the difficulty. Unfortunately, none of these variations to the story manages to leave their mark, reducing themselves to a mere copincolla of the main adventures.

The lack of variety is certainly not helped by the price at which 88 Heroes is offered: thirty euros are really excessive, compared to other similar productions on the Nintendo Switch eShop. The cruelty of certain quick deaths could soon make you want to try again, risking leaving the army of heroes in your console's digital library to mold forever.

At least the visual aspect of 88 Heroes benefits from the portability of Nintendo Switch, and the pixel art characters are beautiful to see and hear thanks to the English jokes that are also full of pop spirit.The texts on the screen are also translated into other languages. without typos of any nature, making 88 Heroes suitable for patient gamers of all ages. Nothing to report on the soundtrack, which simply accompanies the raids of the 88 heroes and acts as a background for Dr. 8te's curses.

Verdict 7/10 Did you expect an 88 as a yes vote? Comment 88 Heroes 98 Heroes Edition is a pleasant arcade capable of disturbing the gods at the slightest wrong jump. The basic idea is original, but clashes with a level design that is not guessed and often not suited to the skill of the hero used. If you are stubborn and patient you will find yourself facing a good challenge, but once completed, you will hardly find the desire to face again. For a further cons, a much too high price, which moves 88 Heroes away from the viewfinder of the titles valid on Nintendo Switch. To be recovered with a large offer. Pros and cons ✓ Fast and addictive
✓ Heroes diversified from each other
✓ Well calibrated difficulty curve x Often unnecessarily cruel
x Some heroes definitely unusable
x Practically all the same modes
x High price

Do you want to be a video game expert and know all the tricks, guides and reviews for your video games ? Holygamerz.com is a group of video game fanatics who want to inform you about the best tricks, guides and tips. We offer you the best information to be a reference in gaming, so here you can find guides, tricks, secrets and tips so you can enjoy your games to the fullest. Are you ready to get all the achievements of that game that you resist so much? Enter now and enjoy your favorite video game to the fullest!
Disney Infinity Review ❯