3D printers What are they? How do they work? All about 3D printing 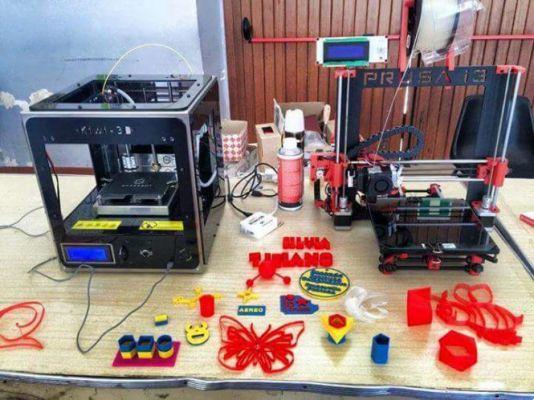 Who has not dreamed of the possibility to print your own decorative objects or pieces simply by inserting a design on the PC and pressing the print button? For those of us who have little talent for using delicate tools, the answer is definitely… I like it.


The possibility of print three-dimensional solid objects is something long awaited not only by those who are not very skilled in the use of chisel and hammer, but it is a technology that has been sought for years by various manufacturers and researchers, who try to implement a method that allows the construction of more varied objects such as medical implants, instruments and other items in a simple and economical way. Fortunately, they found it in the 3D printing.

What are 3D printers? What are they for?

3D printing today is a reality that has already escaped the test labs e, although they have not yet achieved the presence of inkjet or laser printers,  the truth is that this is the path that these types of devices will take, when their value and operating costs drop to a price that the user can pay, we will surely start to see them next to any PC in any neighborhood of the city.

But the field extends far beyond, since we can also find implementations of printing technology 3D in sectors such as the automotive one, in the construction of prototypes, which means considerable savings thanks to the reduction of modeling times and in materials, in the jewelery, footwear and industrial design sectors. Also in the engineering and aerospace sectors, the 3D printers find a place in the production of parts, since they could also be used for the processing of elements in space. As we could see, 3D printing offers applications that will eventually turn it into an everyday device. If you want to know more, we invite you to read the rest of the article.

understand what a 3D printer is, we have to think of a device capable of generate three-dimensional solid physical bodies by adding layer by layer of a material, usually in ABS plastic, but as we will see later it is not the only material used. That is to say, it allows us to create an object that we can then take into our hands.

The most important difference we can find between the traditional forms of construction of objects and 3D printing is that while in the first method the object to be modeled is obtained by removing the remaining material, in 3D printing only the material to be used is strictly used, which produces important savings, as well as less pollution.

For  the materials used by 3D printers to create objects, these are basically divided into PLA o ABS thermoplastics, the most used in the cheapest 3D printers on the market, but we can also find printers that model objects in materials such as resins, photopolymers and even metal, but the cost of this type of printers 3D is so high that it is virtually impossible to buy any of these to be used outside of the industrial field. Furthermore, the associated costs, such as the energy required and the inputs for modeling parts, are excessively high.


How a 3D printer works

As for how these 3D printers do their job, in the first instance we will need a file created with any 3D modeling software like Autodesk Inventor, SolidWorks or Catia who have to “tell” the 3D printer what it should model. In particular with regard to software in the Open Source world there are also very flexible alternatives that can handle these types of printers without any difficulty and at no cost, useful for small businesses and SMEs. In this sense, the Open Source applications that stand out in this matter are OpenSCAD e FreeCAD.

Returning to the files needed to power the 3D printer, these contain precise instructions about the coordinates that must be followed to create the object and are generally introduced to the printer via USB using a flash drive or memory, but they also exist 3D printer models that allow direct connection with the PC. It should be noted that the plans for the creation of objects can be created by us or downloaded from sites dedicated to this activity.

Currently, 3D printing technologies are varied e a apparently, it will not be possible to reach a standard, at least in the next few years. This is due to the youth of 3D printing, which favors the fact that each manufacturer develops their own technology and tries to effectively impose it on the industry.


The main technologies in use are called Fusion Deposition Modeling (FDM ) or Fused Deposition Modeling, which is a method that allows modeling of ABS or PLA plastic parts. This modeling is performed by feeding the printer with a roll of this material which, passing through the extruder of the equipment, is heated, melted and deposited layer by layer forming the object.  After that, you have to wait for the material to cool down and be able to be handled. It should be noted that this method is the most used in the field of home 3D printers.

Other technologies currently in use are the stereolithography (SLA) and selective laser sintering (SLS) both work with the help of a laser beam. The first models the object layer by layer, but involves the use of a light-curable resin bath. In this case, the object printed with liquid resin is cured by the ultraviolet light laser.


As for the technology known as Selective Laser Sintering, it is similar to SLA, but various powder inputs can be used for molding, such as metallic and ceramic materials, nylon, polystyrene and glass, among others. In this case, the laser melts the material and solidifies it. It should be noted that both technologies are highly regarded due to their accuracy.

Many of us have ever dreamed of having a tool that allows us to create solid 3D components directly from a single computer, and even this tool is cheap, clean and simple to use. Even though it seems like we're asking too much, and even harder to get, the truth is that such an artifact exists, and it is called a 3D printer.

3D printers, although initially they were dedicated only to the industrial sector and research, over time their cost has decreased, so they are less expensive and easier to use, to reach such a point that, if we want, we can assemble our 3D printer from kits. And above all, we can use a 3D printer at home, right like an inkjet printer.

What is 3D printing?

3D printing is a technique that allows us to create pieces in 3D, that is, any drawing stored in a file created by the user or downloaded from the Internet using a device called a 3D printer.

Also, a piece can be copied using a special device, basically a scanner, and then reproduced with a 3D printer, but this method is unfortunately out of reach for the average user, due to its high cost.

Basically, as we said, to print a 3D project you need a 3D printer, which is a printing device similar to a laser or inkjet printer, not in its physical form, but in its behavior. This means that for get a piece in 3D we will have to load the file with the design in the software, press the command to print and the 3D printer will start working.

The great thing is that we don't need a special computer to perform this process, because we can use the same computer that we use to work every day.

The main  difference between printers we know as inkjet and laser printers compared to 3D printer is that the latter instead of expelling ink from their nozzles, injects a special molten plastic, that once ejected, it creates anything with incredible precision.

For this simplicity, practicality and ease of use, the 3D printers are increasingly used in many areas, not only in industry or research, but also at home, where the user can leverage his or her ability print 3D parts customized according to your needs.

Also  a 3D printer can be extremely useful for hobbyists, labs, and technical services and other activities that require a method like this to be available, because through a 3D printer they could print many parts and elements which are no longer in production.

As we could see, the field of application of 3D printers is really wide and it has only the limit that our imagination or knowledge imposes on us.

We said that the material to do the printing varies according to the type of 3D printer in question, being the most used in the world, the so-called FDM o “Fused Deposition Printing”, method in which plastic is melted, generally ABS (Acrylonitrile-butadiene-styrene) or PLA (polyacrylic lactic acid), and is distributed in layers by the extruder nozzles of the printers in a tray where the piece takes shape. This plastic is supplied in the form of filaments in rolls.

A laser beam fuses sintered powders with precision and care, creating prototypes, even large ones, highly resistant to wear and high temperatures, suitable for extreme applications such as prototyping and the production of mechanical and thermal parts for various product sectors.

Finally, we also have available the injection 3D printing method, which is injected into layers of photopolymers which are solidified, using chemicals, in the tray. This method is similar in operation to inkjet printers, except instead of ink they inject these liquid polymers.

It should be noted that this technology is the only one that allows 3D printing parts in color  and also allows the printing of extraplanes or protrusions.

Printers on offer: how to recognize the most reliable sites ❯

add a comment from 3D printers What are they? How do they work? All about 3D printing