How to run APK files on Windows 10 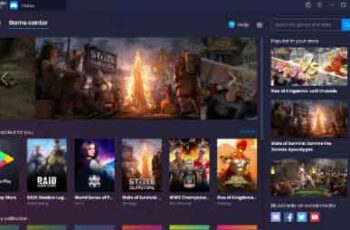 If you own an Android device, you should know that APK files play an essential role in almost every aspect of using your phone or tablet. In fact, all those apps you can't live without are actually APK files.

Running an APK file with an emulator

Emulation is an exciting notion. Since the dawn of relay races and punch cards, people have been thrilled with it. Although many years have passed since then, emulation has not really become mainstream.

There have been attempts, especially to "translate" console games into the "language" of the PC. With so many discrepancies between different devices, emulation has never been done right.


While smartphones are by no means a mere technology, they are literally smaller than PC devices. That definitely means a lot less power consumed, which further solves some other emulation problems. All in all, emulation is finally more than possible and achievable.

Although there are many APK emulators available, BlueStacks App Player is the most popular. Officially, BlueStacks is a way to make apps work. However, in essence, it pretty much runs a full, heavily modified Android OS.

Once installed and run on your Windows 10 device, BlueStacks loads in a typical desktop window mode. You will have access to various categories of apps, such as social, games, etc.

Searching for an app, however, will open the Google Play Store in the way you see on tablet devices. Yes, you will be able to navigate the interface just like you would on an Android tablet. Yes, you can download, install and use android apps on this player. You can run the Chrome browser app (or any other) and use it as your actual browser.

In fact, you can even download and install Apex, Nova, or a similar third-party launcher. You can also set the third party launcher as the default.


Full access to the Play Store means more than you might think. This means you won't have to face the problem of app sideloading and encounter countless bugs along the way. BlueStacks simply runs the apps for you and does a great job in the process.

It is not ideal

However, BlueStacks is not an official Android emulator. It does not run a standard build performed by Android devices. A lot of changes have been made to make APK apps work on a Windows 10 PC. Don't expect apps to hang on you, but don't be surprised if they do either.


This is why BlueStacks is not used in app development - things will simply display differently on BlueStacks than on a real Android device.

Ports aren't exactly emulators; in other words, they are not really "tools that allow you to use Android". Ports essentially mean installing modified versions of Android on Windows 10 systems. There are two main choices when it comes to Android PC ports: Remix OS and Android-x86 Project.

Unfortunately, neither of them work perfectly. The UI here isn't stock Android; rather, it runs on the x86 project code that has been modified to provide a desktop-like user experience. This isn't a bad thing, as you'll be using the system on a desktop.

Alternatively, you can try running an Android OS using VirtualBox. This is faster than the official Android emulator but not as effective and fast as BlueStacks. Also, you won't get Google Play integration with this.

Running an APK via Chrome

One of the coolest things about the Chromebook is that it can run APK files. It's a very basic operating system, not capable of doing too much, but it works brilliantly with APKs. How does he do it? Well, the operating system is based on Google Chrome, so it has to do something with the famous browser, right? OK.

Chrome actually has a tool that allows you to test Android apps while in the browser.

But why on earth would you run an Android app like this? Well, it's simple, really. Any experienced Chromebook user will tell you that he actively uses Android apps on their laptops, for lack of a better alternative. But why would a Windows 10 user want to run an APK file?


Well, there are some Android apps that don't have a web-based equivalent for the browser. For example, Evernote and Snapchat. Hence, there are many great games you may want to run, even apps that are frustrating to use on the smaller screen. This is actually why some people get Chromebooks in the first place.

Don't worry, you don't need to get a Chromebook to get these features. Fortunately, Google Chrome is perfectly capable of doing this on your Windows 10 operating system.

Google Chrome doesn't allow you to run APK files from scratch. There is no apparent feature that allows you to do it this way. You will need to download the tool called ARC Welder. This tool is a Chrome extension that you will find by searching for it as you would when looking for any other extension. Add it to Chrome and you'll be able to run apps on it, one at a time.

The cool thing about ARC Welder is that it will work on non-Chrome operating systems (macOS, Windows 10, and Linux). However, it is especially designed for Chrome OS. Be aware that bugs can occur on Windows 10 devices.

Get your hands on the APK files

Now that you've downloaded and installed the tool you need to run Android apps through Chrome, it's time to get your hands on the APK files. There are various APK databases available online. APK files are not hard to find. So, just use Google and pay attention to the reliability of the particular APK site you are visiting.

If you are not familiar with Android Studio, follow the instructions to learn how to configure it to run APK files in Windows 10. You will need to make sure that the SDK tools have been installed on your system.

Is BlueStacks Safe to Install?

Yes, BlueStacks is completely safe. It is a certified tool and guarantees that no secondary apps are bundled with it. However, there are risks involved here. Using BlueStacks does not give you the freedom to install any APK files on your computer. BlueStacks is a virtual machine that allows you to download and use Android apps on Windows 10. However, if you don't download the app from a trusted source, there's no guarantee it's safe.

But yes, BlueStacks, by itself, is 100% safe. Be careful what you are downloading once BlueStacks is installed.

What are APK files?

Any file that has the APK extension (.apk) is referred to as an “Android package file”. They are used to store Android apps running on Android OS devices. Typically, APK files are stored in ZIP format and are downloaded directly to Android devices using a service such as Google Play Store. Of course, some websites allow you to download APK files yourself.

Does the APK only run Android programs?

Before even starting the debate on the legality of Android emulators, just think about the fact that APK files are available in open-source format. Yes, that means you can officially and legally get the APK files to use. How do you run these apps on non-Android devices? Well, emulators are clearly one of the main answers here. BlueStacks, for example, is 100% certified and safe and legal. Many other emulators are also legal.

How do I find the APK from an Android app?

Unlike Windows 10, the rigid folder structure is not noticeable on Android devices. While you can go to the installation folder on any PC application and see the files, it just doesn't work like that on Android devices. If your device is rooted, you can find the APK file for an app you installed in / Data / app. If you are looking for a stock app APK file, you can find them in the rooted folders / System / app o / system / priv-app.

Windows 10 is an APK file

There are many ways to use APK files on your Windows 10 device. Of course you will need to use a tool to install them. Use an emulator like BlueStacks, run them via the ARC Welder app on Google Chrome, or use a PC port. Either way, there are ways to test, run, and even use Android apps on your Windows 10 PC.

Have you tried any of the above methods? Which one did you prefer? Have you encountered problems with APK files? Which ones have you failed to perform on your Windows 10 system? Feel free to join the discussion in the comments section below and add your thoughts on the subject.

How To Jailbreak Apple TV - Should You Do It? ❯