Terabytes, Gigabytes and Petabytes: what do they mean? 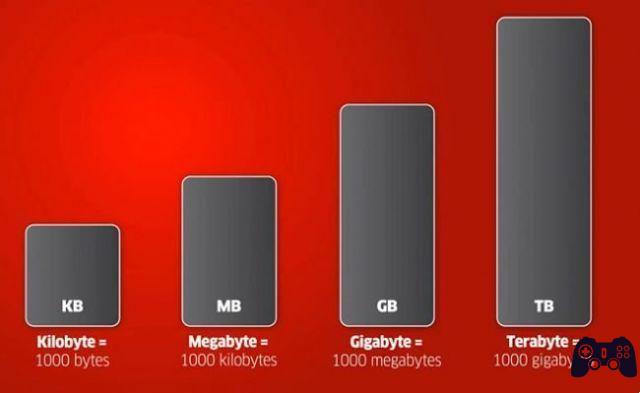 Without a doubt, one of the most common technology questions we are asked regarding these data storage metrics, such as terabytes, gigabytes, petabytes, megabytes, etc. You've probably heard of these terms before, but do you know what they mean?


How many gigabytes are there in a terabyte? What does one terabyte mean in the real world? These are all things you need to know before buying a hard drive or memory card, choosing a tablet based on the memory it has, etc.

Fortunately, as confusing as it may seem at first glance, all of these units of measurement are easily convertible from each other and are simple concepts to understand thanks to the examples we have provided below. Let's start with the basics.


Terabyte, Gigabyte, and Petabyte: Which is Larger?

Right away, knowing which is bigger and which is smaller, as well as the abbreviations that represent these numbers, is probably the most useful thing to get started.

All of these computer technology storage units are based on the byte, which is the amount of memory required to store a single character of text:

Less useful in the real world is the bit more small (there are 8 bits in 1 byte) and the largest zettabytes e yottabyte, among others.


Byte is the unit of measure commonly used to describe storage capacity, but there is also the bit that many Internet Service Providers (ISPs) use to describe the speed at which data can be downloaded or uploaded. It is important to understand the differences between bits and bytes so as not to get confused.

To convert from one unit to another, you just need to know that for each level you go up, you multiply by 1.024. Don't worry if you feel confused - there are enough examples below, you will understand how to do the calculation in the blink of an eye. The table at the bottom of this article is also helpful.

You will see many sources online saying that each new level is 1.000 times greater than the smallest, not 1.024. While this is true in some cases, in practical terms, considering how computers use storage devices, 1.024 is the most realistic multiplier to do the calculations with. Now let's move on to the more practical things ...

How big is a terabyte?

Terabyte (TB) is the most common unit used to measure hard drive size and a number that you may actually encounter from time to time.

As you saw earlier in GB to TB math, 1 TB equals little more than a trillion bytes.


How big is a petabyte?

Memorizing a single PB would take more 745 million floppy disks o 1,5 million CD-ROMs, clearly not an effective way to collect a petabyte of information, but it's fun to think about!

A single PB is 1.024 TB… this number was already big by itself! In an even more impressive view, 1 PB equals over 1 quadrillion bytes!

How big is an Exabyte?

Even talking about a single EB sounds a little crazy but there are situations where the world really comes across this level of data.

Yes, it's comical, but going back to the previous comparisons: to get to just one EB it would take 763 billion floppy disks o 1,5 billion CD-ROMs. Can you imagine it?

How big is a gigabyte?

Talking about GB is a little more normal - we see GB everywhere, from memory cards to movie downloads, smartphone data plans, and more.

A single GB equals just over 700 floppy disks o little more than a single CD .. little for the numbers we talked about above.

A GB is by no means a small number, but nowadays it is a data layer that we use quickly, sometimes several times a day. It's a number we always run into.

As we showed in the MB to GB conversion earlier, 1 GB equals over a billion bytes. It's not a small number, but it's no longer an impressive amount as it once was.

Here's it all together, which helps illustrate just how big some of those big numbers get!

Thunderbolt 3: what is it and how to differentiate a Thunderbolt 3 cable from the rest? ❯

add a comment from Terabytes, Gigabytes and Petabytes: what do they mean?