League of Legends: Ezreal update is available in patch 8.20

The rework of one of the most iconic characters in League of Legends is finally available in patch 8.20. In addition to changes to the base models, the champion's "Essential Flow" (W) ability has been changed, making some gameplay changes

Ezreal, the prodigal explorer, was one of the first characters in League of Legends. From Piltover, the most technologically and scientifically advanced region of the LoL universe (as well as the cultural center of Value), Ezreal is an explorer, a daring adventurer with a keen talent in the magical arts. His mighty Shurimano gauntlet is capable of unleashing powerful bursts of arcane power to fight his enemies.

Born and raised in a wealthy neighborhood of Piltover, Ezreal has always fantasized about becoming an explorer and archaeologist, just like his parents. When they returned from their long journeys, his father told him what they had seen and faced, and they planned the next expedition, but one day his parents left on an expedition from which they would never return. Although his uncle tried to convince him that his parents were dead, Ezreal decided to go in search of them.

Following the notes in his mother's diary, he came to the treasure his parents had been looking for for months: the grave of Ne'Zuk. The tomb was empty, if not for one bronze glove with a stone set in the center. As soon as Ezreal touched him, the entire tomb turned on him, with centuries-old creatures and traps ready to take him out. The explorer promptly donned the glove, and managed to make his way through the dangers of the tomb, to the exit. Now safe, Ezreal looked at the glove: the weapon, which now seemed to be one with him, was a treasure belonging to a forgotten era, worthy of a warrior god of Shurima. Despite failing to find his parents, Ezreal decided to dedicate his life to exploration, bouncing from one adventure to another around the world.

While the character's base stats remained the same, the skillset was slightly changed, while the ability "Essential Flow" (W), was replaced with another ability, but kept the same name. The aesthetics have also been renewed, bringing a breath of fresh air to Ezreal's textures, sprites and graphic and sound effects, bringing it in line with the style of the recent reworks of other characters. 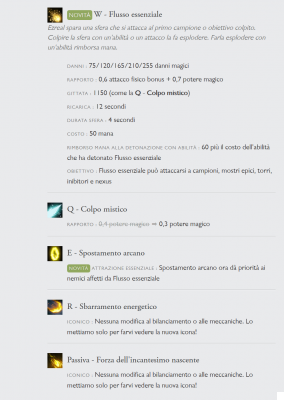 While the passive "Force of the rising spell" and the ultimate "Energy barrier" (R) remained unchanged, the other skills were changed. "Mystical Strike" (Q), was slightly nerfed, and now stacks 0,3% ability power instead of 0,4%. "Displacedly arcane" (E), if it previously prioritized hitting the closest target, it now prioritizes the target affected by "Essential flow" (W). This last ability is the real novelty of the update, as it has been completely renewed: now Ezreal fires a sphere of energy that attaches to the first target, and is detonated by the next attack or spell. Upon detonation, the target hit is dealt bonus damage, and defusing Essential Flux with a spell refunds 60 mana, plus the cost of the spell used for the detonation.

These changes are likely to make Ezreal more competitive in combat 1vs1, having until now tended to be a character more marked by positioning and "kiting". After this patch, the champion will be more competitive in the lane phase, will have more mana sustain, thanks to the refound of the new one W, and will deal some more damage thanks to the combo W + rest of the skillset.

The other new features of patch 8.20

In addition to the rework of Ezreal, patch 8.20 brought other changes between balances to the characters, new skins and chroma packs, along with the usual bug fixes: 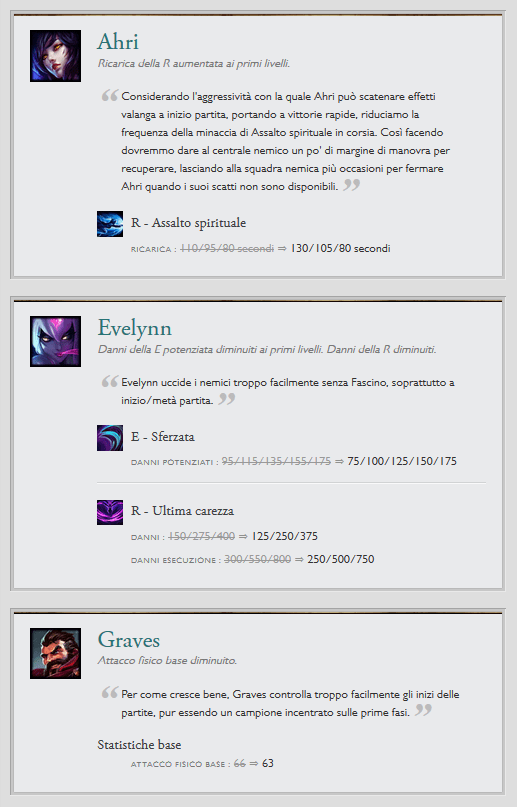 In this patch Ahri receives a small nerf on her ultimate, having slightly increased cooldown times at skill level 2 and 3. Evelynn is balanced, and sees nerf both there E that the R, being too powerful an assassin for the current meta. Graves gets nerfed in basic attack, thus being slightly weakened in the early game. Other Champions rebalanced in the patch include:

In addition to these nerfs, the following bugs have been fixed:

Finally, for the "aesthetic" department, they were released 3 new Skins and 3 new Chroma Packs.

The patch is available from 9/10 on all official game servers, for more information visit the link: https://euw.leagueoflegends.com/it/news/game-updates/patch/note-sulla-patch-820

Add a comment from League of Legends: Ezreal update is available in patch 8.20