Writing a step-by-step guide for the single player missions of this game would have been a joke as they are not very difficult and above all because, being this a game brought towards multiplayer, if you fail to acquire a tactic able to beat the computer how do you hope to get away with it on the net? Well then I think that a series of general tips filled with some related to the various factions present will be more useful, rather than a solution to the completion of the missions that as you will see while playing certainly do not constitute the fulcrum of the game.

First of all you need to be honest with yourself and be able to tell if you are an experienced player or a novice. In the first case I doubt that you have sought help in this guide and the only advice I can give you is that practice leads to perfection, so the only way to be unbeatable is to train in Skirmish against the Brutal armies or in multiplayer with the gurus of this game. If instead you belong to the second category, then welcome and I hope I can be useful to you.
The first step in the world of Generals is to remember that every strategy has a pre-printed base and an absolutely original form, this goes from the poorest to the most renowned. And the present here is no exception. So let's lay the foundations, take any map, possibly large and put yourself at one end, then put a low level enemy at the antipodes and a medium strength ally close enough to him but not too much or he will destroy it too quickly. Also set the game speed to maximum. Well once loaded get ready for this kind of tutorial. First thing, whether you have chosen one faction in the prerogative of another, the first thing to do is to build an energy source.
Wanting if you have enough money build two which will come in handy later. Once this is done, look for the nearest supply zone and build a collection point close but without exaggerating it by building two collection bulldozers or four workers. You now have energy and a source of income, so you can start thinking about the army. But who should this army be composed of? Well here it depends on you. If you want to follow the classic strategy that is always valid and that for heaven's sake works, well then simply create an army in these proportions: two fifth mixed tanks (machine guns and cannons), a fifth heavy weapons (missiles), a fifth mixed land army and a fifth air armies, the latter unless you are USA will only have an incursive function. With a similar attack tactic you can be sure that you have a high chance of extricating yourself in any situation.
Obviously the scheme to follow is to send the tanks to the front line, then the infantry, then the heavy weapons in the rear, calling the planes when you approach the clash in order to make them hit either all a building or an enemy each, which in this last case, if they do not destroy it, they will certainly weaken it a lot. This is the classic strategy that can be useful for learning the rudiments of the game and that will be enough for you in most cases to win the missions against the computer. Once you have learned this strategy you can make it yours and customize it in order to make it effective even in multiplayer. For example, one way to vary is to build an army with heavy infantry, tanks with machine guns and a good air fleet. Obviously this is only one of the possible combinations. However whatever your choice of strategy, once you have built the bases of your army, that is, an army that is at least able to defend you from the first timid enemy attacks, you must definitely expand.
You need resources and you certainly won't get them by continuing to build collection units with a single collection point. The first step towards expansion is to see the location of the supply zones and any oil fields, which I remind you that to capture which you will need hackers or light infantry trained with the appropriate skill. Once you have spotted the nearest expansion points, send a builder with a supply to build a gathering point. If you play with China, remember to build a collection point for every two to three bins because the Chinese bins can only unload their load one at a time. I recommend, it is essential to have your expansion points protected against any enemy attacks that could drastically cut your income.
And without money, you can't build an army. Last general advice I give you is to avoid, if possible, to build all your nearby structures, this is because in advanced missions or in multiplayer or in Skirmish mode, in short, in any situation in which weapons of mass destruction such as the atomic bomb, the storm SCUD and the various carpet bombings, if your buildings are far enough apart these attacks will be extremely less effective.

In this chapter of C&C there are three opposing factions, each with peculiar characteristics and with particular weaknesses. Let's say that the most balanced faction is certainly the US one, as it has relatively low costs and has a range of very versatile units, moreover its collection system is the most effective even if not the least expensive. The other two factions present, on the other hand, are much less stable as one flaw in excess and the other in defect.
China is based on a massive and lethal ground attack but needs time and abundant resources to build units. Finally, the GLAs are the weakest units if not administered by expert hands, and are more suitable for guerrilla warfare, as the units are very inexpensive and very fast, but weak both in attack and defense. Deadly in hit and run attacks in direct firefight they are wiped out. And now let's see the three factions more specifically.

As I said in the introduction, this game choice is recommended for those who play for the first times as it allows you to put into practice all the possible combinations regarding the structure of the army. The strengths of this faction are certainly the fast collection system based on helicopters and the very useful air department, precisely as regards the combat helicopters that unlike the planes do not need to return to the base and are lethal against tanks. simple that have no anti-aircraft measures.
Obviously against anti-aircraft ground structures and heavy infantry they are easy targets, but some support tanks may be able to overcome this problem. As for the other units, they are all medium-power units, worthy of note only the simple infantry that with flash grenades can knock out large battalions of enemy infantry and the red cross jeeps capable of healing wounded soldiers.

The Chinese faction is my favorite as it is technically powerful and "stupid". The Chinese attack is based on three key words: power, power and more power. The Chinese strengths are certainly the high level of defense of the collection units and the tank-type ground units, in addition to the flamethrower.
With the Chinese there is little to think about, as the air department is made up of a single unit, the Mig, which is only useful as a raider against other units as the damage it causes is very low and the buildings practically do a mustache. So you have to bet everything on the wagons. Obviously if we talk about chariots, it is impossible not to refer to the overlords, the most lethal unit in the game. An overlord has a very high mixed attack power with excellent defense, plus it can be modified with the addition of some pieces that make it more lethal. Three gatling overlords stand up to an entire enemy army and one bunkered overlord loaded with heavy infantry destroys tanks like a lawn mower.
And if this were not enough, the overlord can pass over medium and small size wagons. Obviously it is not a perfect unit, as it is very slow and becomes easy prey for air raids and heavy weapons. Even if these defects are remedied by using simple tanks for heavy weapons and those with gatling for planes, not to mention the flamethrower against infantry. In conclusion, the Chinese faction is unbeatable in direct confrontation in large spaces without cover where those who endure win it, while in urban guerrillas or hit and run type they suffer a little.

I left the rebel faction for last as it is in my opinion the toughest choice for this game. This faction has important characteristics that make it fluid and fast but at the same time see it become weak in direct attack. The strengths are certainly the very low cost of the units as well as the possibility of using the collection units as construction units and vice versa, even if the latter being infantry units are very vulnerable.
And here is the flaw. This is a faction based on fast and weak units as well as infantry and the movement of the latter. While it is true that in aid of this philosophy there are useful tunnels capable of moving units very quickly from one point to another on the map, on the other hand there is the fact that unfortunately a high amount of units are needed to really procure damage to the enemy. Let me explain better, the only truly lethal units are the explosive kamikaze-type units, capable of causing considerable damage, but the latter are disposable and the second must arrive intact on the target, and this becomes difficult especially with infantry kamikaze , which are excessively vulnerable.
To the aid of this comes the crowd unit in which the suicide bombers can be ambushed and made to arrive at their destination, but even this trick does not always succeed. Furthermore, as tanks the most useful is the anthrax one which is lethal against enemy and friendly infantry units, so we must pay attention to it. In short, in conclusion, the GLA is the faction dedicated to those looking for a hit and run guerrilla style where you can use a lot of imagination in the attacks and I recommend it only to those who already have some experience in the game. 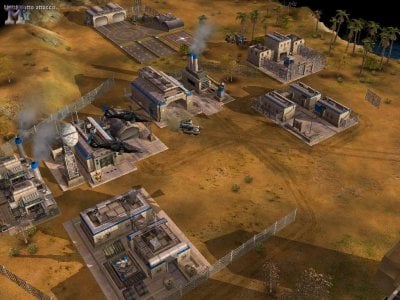 The complete solution of Commandos 2: Men Of Courage ❯

add a comment of The complete solution of Command & Conquer: Generals