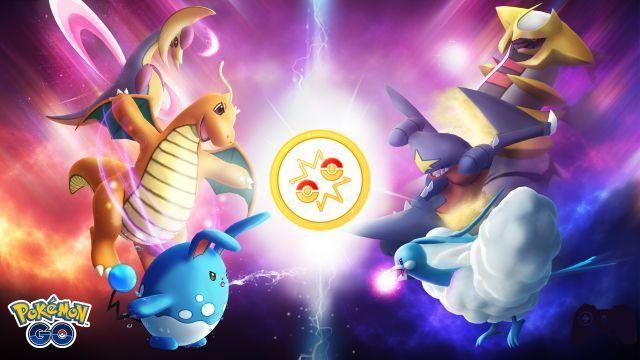 The Pokémon series trainer battle features are also present in Pokémon GO. From the list of your in-game friends you can select one to fight with by pressing the appropriate button and choosing a League (explained later). Any such fight will be friendly, and will not contribute to any kind of score other than what your ego dictates.

However, there is a section of the game dedicated to competitive battles, accessible from the Pokéball menu by pressing on Fight. By following these steps you will find yourself inside the GO Battle League, a ranked PvP mode that will require effort to proceed. Each fight contributes to your score, and you will be rewarded based on the number of wins and the rank obtained.

Lega Lotte offers a competitive playing field designed directly by Niantic itself, which is divided into seasons consisting of a pre-season and live of the season. The total duration is usually a month and a half or two, marked every week by the change of active League. At the moment we arrived at the seventh season. 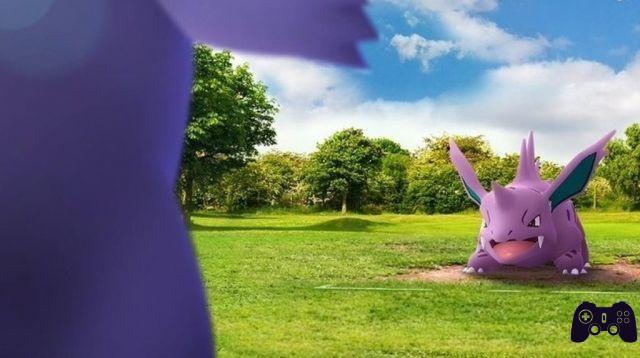 At the moment the GO Battle League is with open participation. Until further notice from Niantic you will not need to walk to fight.

Each set of 5 fights will take into account the number of wins that you got to give yourself rewards. You can have a maximum of 5 per set by winning 5 fights in a row, after which the reward streak resets to its initial state. There are two Award "paths", one can be activated for free and the other on the use of a Premium Battle Ticket (the same used for raids, which can be purchased in the shop). 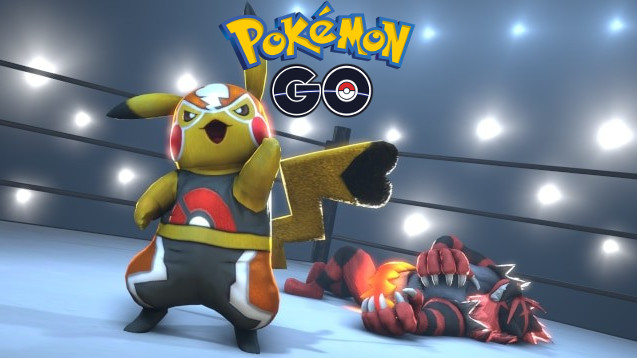 Pokémon that can be obtained as a reward: (the first encounter of ranks 1, 4, 7, 8, 9, 10 guarantees the indicated Pokémon - which can still be encountered in the following encounters along with one of the others specified)


It's possible advance in rank in GO Battle League by meeting certain requirements. In most cases, it is a question of participating or winning a certain number of fights, but to reach rank 24 you need to accumulate a certain number of points. Of course, only victories contribute to the score, and in the higher ranks you are penalized in case of defeat. The current score appears above the rank emblem only from a certain point on. Here are the requirements to reach each level.

By "wins / fights" we mean more than the total needed to reach the previous level. To reach level 3, for example, it will then be necessary to accumulate 3 victories after reaching rank 2.

Any Pokémon can be used in the Mega League as long as its Battle Points are no higher than 1500.

The low PL limit imposed by this League gives room for virtually any Pokémon in your box to participate in battles. You can create a myriad of different combinations, using even non-evolved forms of Pokémon. Almost all three starters from each region are heavily used, with a large majority holding for Swampert and Venusaur. Furthermore, as regards the first, there are also those who prefer to use it in its non-evolved form Marshtomp, as with the same PL the latter enjoys more balanced statistics and greater defense.

Among the current top tiers of the meta we find Altaria, Stunfisk forms Galar, Azumarill and Skarmory. Stunfisk, in particular, he makes his way to the summit by downgrading the former undisputed king Registeel, as he can use Earth moves that can take down the legendary golem. Altaria, Azumarill and Skarmory are very popular choices among players, mainly due to the speed with which they prepare their charged attacks to attack the opponent.


Just below the ranking, the so-called ones make their way "Mud bois", Ground / Water-type Pokémon that are very resistant and with access to important moves. Swampert, Hoenn's starter Pokémon, has access to the legacy Hydro Cannon move - but even without it, it's a worthy opponent, see also its equal competitors Quagsire and Whiscash. Adversaries of difficult defense are then the aforementioned Registeel and Deoxys defense form, which have now carved out a reputation in the Mega League. The other forms of Deoxys do not enjoy wide usability, and are rare to deal with.

Very common are Venusaur and Charizard, Toxicroak, Lapras, the first two especially for accessing legacy moves while the latter for good usability. Lapras, as Sierra also demonstrates, can be a very dangerous opponent to counter - especially his Shadow version, which enjoys enhanced stats in battle.

Two special mentions. Lucario: With Counter Attack he can load moves like Crescipugno or Zuffa very quickly, bearing in mind that the former increases his attack stat and is very fast in loading. Melmetal, Mythological Pokémon pure Steel type obtainable only by trading with Pokémon Let's GO. In the face of a not negligible difficulty in obtaining one, Melmetal is very resistant, and is an excellent Pokémon both to open the fight and to finish it. 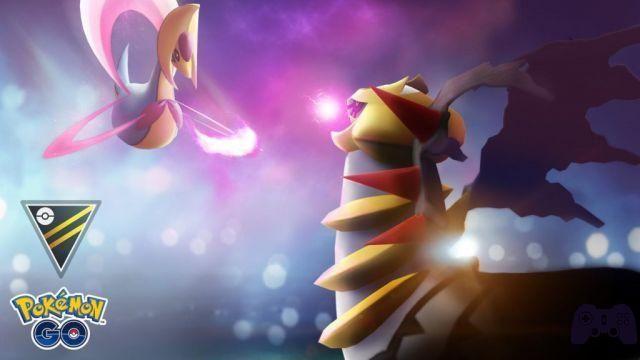 In Ultra League battles, Pokémon can only participate if their CP does not exceed the value of 2500.

The Ultra League meta appears to be focused on three types - Dark, Ghost, and Steel - to which the most used Pokémon in the League belong. At the top of the ranking of the best sit the Altered form of Giratina and again Registeel, already an ace of the Mega League. Giratina is a must have, starring in a staggering majority of teams. His moves can dangerously damage opponents while being neutral on most of them. Compared to its Original form, the Altered form has its attack and defense stats reversed - which results in the Pokémon equivalent of a tank.

Registeel, "fallen" king of the previous League, holds up his name. The addition of the normal-type Quick Move Locate has enriched it with an attack capable of generating a lot of energy. In the face of unremarkable damage per turn, therefore, his charged moves charge faster than they should. While this doesn't make winning much faster, it certainly does much favor. The steel golem can effectively counter Giratina's Altered form, although the Origin form's higher attack stat turns the tide.

The fact is that the Original form of Giratina is just a step below, along with names like Lapras, Togekiss, Muk form Alola, Cresselia and Swampert. Speaking of the starter Pokémon, if Charizard continues to be among the protagonists Venusaur gives way to Blastoise, and Typhlosion (along with Meganium, already used from time to time in the Mega League) makes its way from the Johto region. The latter in particular enters the rankings thanks to the quick move Ombrartigli, able to generate energy quickly to charge the legacy Fire.

Honorable mentions for Snorlax and the proud Sirfetch'd, evolved from the Galar form of the well-known Farfetch'd. Just Sirfetch'd, recently added to the roster, it presents itself as a papabile threat to the meta, enjoying the quick move Counterattack (one of the best in the game) and loads such as Leaf Reaver (very quick to load) and Zuffa, although this is a double-edged sword .

And pay attention to the tender Clefable ... 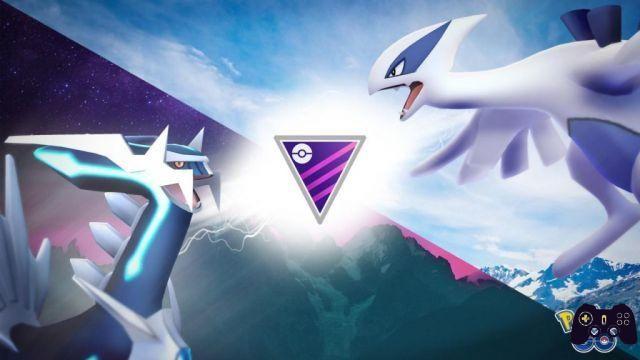 The Master League it imposes no restrictions whatsoever. Any Pokémon will be able to fight, regardless of its CP or its being legendary or mythological.

The lack of restrictions significantly increases the presence of Legendary Pokémon in this League. Among the top tiers we find for example Groudon and Dialga, legendaries of the third and fourth generation who seem to reign almost unchallenged in this League. If Groudon's moves cover his weaknesses well, Palkia doesn't have many rivals who can effectively counter him. The only one that can hold its own is Togekiss, which, albeit with no little difficulty, can have hopes of victory.

Among the other choices of the League take the field the legendary Pokémon, as already mentioned. Some names are Kyogre, Melmetal, Zekrom and Reshiram, Lugia, the former original form Giratina, Mewtwo and Mew. But don't underestimate those who don't bear the reputation of “legendary”: Swampert, Dragonite, Snorlax, Hydreigon, Machamp and Rhyperior, for example.

Pokémon GO also offers types special of Lega Lotte, of which at the moment only the Premier Cup has been tested (in progress). This follows the rules of the current League: if for example the Ultra League is active you will not be able to bring Pokémon with a PL value higher than 2500. Extra restrictions also apply: in the current season, for example, it is also forbidden to use Legendary Pokémon or mythological like Mewtwo or Melmetal. Based on the Pokémon recommended above for the current League, keeping this restriction in mind.

The limitations of the Premier Cup shift the bull's eye on those "budget" Pokémon, in other words the economic choices that you are likely to have. Machamp for example, a quick attacker who also has the Slash Charged Move - does not enjoy a similar attack bonus (STAB) but will help you lure opponents' shields. Also Dragonite, Rhyperior and Metagross you will see very often, and especially Dragonite could be a very difficult opponent. Each of these three then had their own Community Day where they earned a powerful legacy move. Finally, a special mention a Gyarados, star of last Community Day where he was able to learn Hydrondata - another important move to use in PvP.

Meta Premier is mainly made up of the aforementioned Pokémon, which you will see with impressive frequency in various combinations. The most obvious choice would be to fight fire with fire and think about using at least one of the above, and we can only recommend Machamp for its great usefulness. A good anti-meta is instead Mamoswine, Pokémon Ice / Rock whose moves put a strain especially Dragonite (but you have to be very careful with the others mentioned). He too had his own Community Day, and if you haven't attended, remember that it will almost certainly be re-proposed in a similar event (probably in December).

Two different types of these Special Cups are coming in the near future - the Flying Cup and the Halloween Cup - which appear to be playable in the Mega League. If the requirements for the first are clear (only the Flying type is allowed), the second will allow the exclusive use of Poison, Ghost, Beetle, Dark and Fairy-type Pokémon, creating an interesting and different destination than usual. Remember that you can enter the following text in the search bar of the box, to view all your Pokémon that meet the requirements: pl-1500 & poison, ghost, beetle, dark, goblin. Alternatively, you can find the complete list and suggested moves for each Pokémon here.

The program for the next few months would appear to be as follows:

Other new features in season 4:

Some advices that are always valid

Special Could the price of video games increase? You did not understand anything ... ❯

Control: how to find all the Security Keys | Guide

NBA 2K19: The Best Franchises To Start With MY GM | Guide

Fortnite: how to get the Aquaman skin | Guide