In this guide I will explain how to beat the final boss of "The Legend of Zelda: Breath of the Wild", or the Calamity Ganon

First of all, before starting the fight against Ganon, you will need to have:

When you have met these prerequisites, you are ready to take on Ganon.

As soon as you enter the Main Tower, marked on the map by a large orange dot, a cinematic will start in which Ganon will be seen intent on freeing himself from the cocoon that was holding him prisoner. Ganon will collapse on the floor which will break and you will fall with him in a huge room: another cutscene will start where you will see the 4 spirits of the Champions attacking Ganon with the relative Holy Colossi. This attack will be quite fundamental as it will take away half of his life energy from Ganon. After this attack, however, everything will be in your hands. 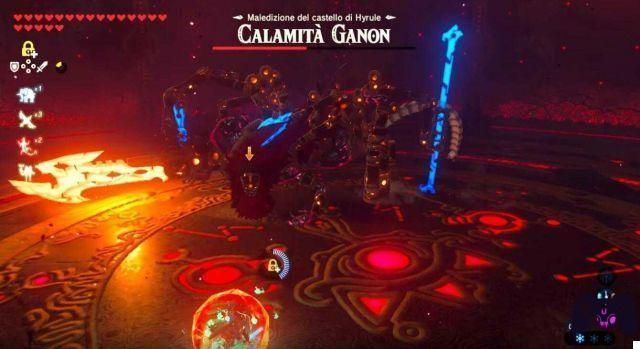 First part of the fight

The tactic for this first fight is divided into two parts, as Ganon will attack you both from the ground and clinging to the walls. When he is on the ground he will mostly use his sword and laser beam.

With the sword he will be able to make two attacks: the first is a swipe from the top to the bottom that will generate a streak of fire on the floor. Very easy to dodge, you just need to shoot either right or left to avoid it. The second attack is a horizontal slash that will generate streaks of fire. To avoid them, just stay on the part of the floor that is not on fire. The laser attack, on the other hand, is the typical attack that every Guardian you have encountered around the map makes.


When Ganon approaches to hit you with the sword, use the stacy to block and hit him (be careful, though: the Stacy will only block him for a few seconds, so you have to hurry). When, however, he attacks you with the laser beam, you will have to use the Egidia of Daruk to send the beam back at him: as soon as he is stunned, block him again with the Stacy and go down heavy with the Supreme Sword.

During the fight it will often happen that Ganon will climb walls and start throwing very different attacks at you. However, it will use the same special attacks used by the Ganon Emanations of the 4 giants. My advice is this: whatever attack he makes do not try to counter him but run away, no matter the direction but move constantly to prevent him from targeting you. There is only one attack that you can counter without too much trouble: when he shoots blocks of ice at you, you can safely tear them apart with the Glacyor.

If you want, you can throw electric arrows or bombs at him when he's on the ceiling. I never did, as I always used aegy and, when Daruk's power needed to recharge, I went to Stacy's every time she got close. 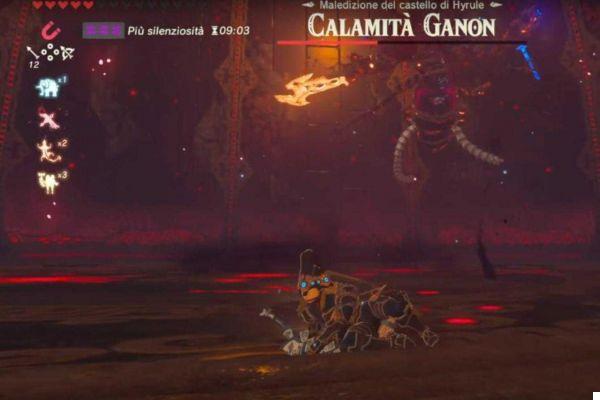 Second part of the battle

Once the boss's 3/4 life is eroded, Ganon will cover himself with a shield that will make him invulnerable to any attack. In this part of the fight, he will use the laser beam, the sword attack and, when climbing walls, a spear. To be able to inflict damage there are basically 3 ways:

If during the fight you are short of Urbosa's Fury, my advice is to dodge the attacks: just use the dash just before it attacks you and wait for the Egidia to recharge. After using Urbosa's fury 3 times, it will be enough to use the Egidia a couple of times when he fires the laser at you to fix it permanently.


Final Showdown: the Beast of Darkness

Once the match is over, you will be teleported to the plain of Hyrule next to your horse, the perfect place for the ultimate battle. Here Ganon will assume his classic form (that of a boar): the technique to deal with it is however very simple.

Before the fight you will get on the horse and Zelda will give you the Arc of Light, the most powerful bow in the game (100 damage, infinite arrows and a practically unlimited range).

Now try to be careful. Try not to position yourself in front of Ganon, because he will shoot a red beam at you from the mouth that does a lot of damage, and also avoid touching his paws. To be able to defeat him, just gallop around him and hit him in the bright spots created by Zelda. In this form Ganon is invulnerable, except when Zelda manages to break through his defenses.

For the final blow you will then have to go in front of Ganon's head, jump off the horse and shoot an arrow in the middle of the huge eye that will open in the forehead. After this last shot, you can enjoy the final cutscene of this splendid game. 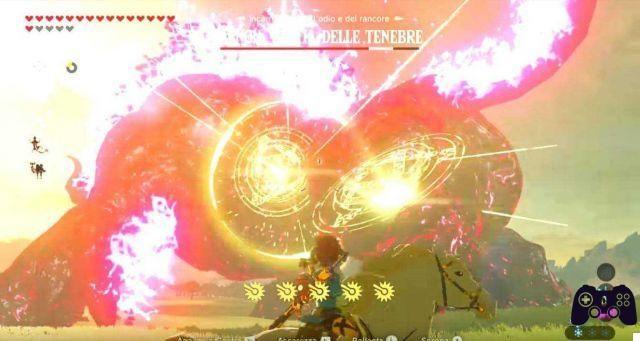 I sincerely hope this guide has been useful to you. Let me know in the comments which technique you used to defeat the Ganon Calamity.

The Outer Worlds: tips and tricks to play better ❯

add a comment of The Legend of Zelda: Breath of the Wild, how to defeat Calamity Ganon