Legends of Runeterra: Guide to the best Piltover and Zaun champions

Here we are at the last guide (for now) of the column on the best champions of Legends of Runeterra, with the last remaining region: that of Piltover and Zaun

Today we take a look at the last remaining region of the League of Runeterra world: Piltover and Zaun, with the guide to its best champions. Once again, we would like to remind you that the study and experimentation of cards, feeling and synergies between the mechanics of the game, are in building a winning deck. Our intent, therefore, in the course of this column, was to show you the champions of the different regions of the game and their potential to help you choose the right cards without wasting too much time.

The lands on which Piltover and Zaun stand were once less distant both in the heart and in the soul. Piltover is the beating heart oftechnological innovation and the progress of science, while Zaun is a extended urban district lying in the deep valleys of Piltover. Once, Zaun and Piltover were two worlds united; now, however, they are separate while remaining complementary. Although located in the smog-gray slums, Zaun continues to to evolve, its people are active and the culture rich. The prosperity of Piltover has consequently allowed the development of Zaun, who waits in the shadows for his revenge.

Piltover and Zaun decks are mostly based on spells and chained combos, often heavily focused on card fishing. These decks are arguably the most versatile, offering viable alternatives in both attack and defense. Along the same lines, the Piltover and Zaun samples turn out extremely versatile and they can turn the tide of a game upside down in a few lucky turns. Currently, there are four of the many champions featured in League of Legends in Legends of Runeterra: Ezreal, Heimerdinger, Jinx e Teemo. Without wasting any more time let's start with our guide to the best piltover and Zaun champions in Legends of Runeterra! 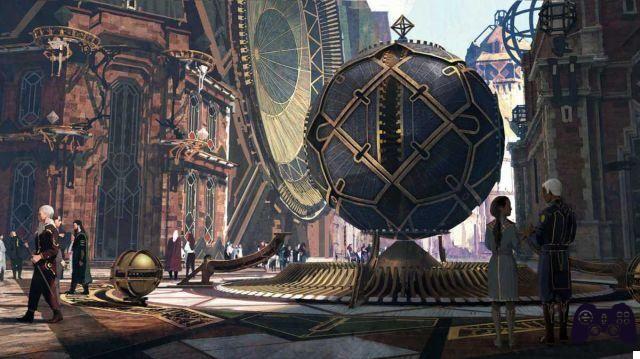 Ezreal, the prodigal explorer - Legends of Runeterra: guide to the best champions of Piltover and Zaun

Ezreal is a daring adventurer, with an unexpected gift for the magical arts. He likes to venture between lost catacombs and ancient curses, overcoming impossible difficulties. His courage knows no bounds, he loves to improvise in any situation and is equipped with a mystical Shurimano gauntlet, which he uses to unleash devastating volleys of arcane power. When there is Ezreal, trouble is never too far away. Nor too hidden. They are practically everywhere.

Just like in League of Legends, Ezreal relies heavily on spells. Having only one attachment point, despite being equipped with "Circumvention", Ezreal is not ideal for directly inflicting the enemy Nexus, which is why he is equipped with a second ability that allows him to create a spell "Mystical Strike" in the hand of the player, every time he hits the Nexus. After hitting enchanted enemy units at least 8 times, Ezreal levels up by unlocking its true potential. Once evolved Ezreal retains the same abilities, with the difference that each time he casts a spell he deals 2 damage to the enemy Nexus.

Thanks to his skills, Ezreal is perfect for putting on decks spell based like those of Piltover and Zaun or the Ionia deck with Karma. He travels great as a couple with his fellow regions, particularly getting married with Teemo and his cards, showing himself to be one of the best champions of Piltover and Zaun.

Heimerdinger, the revered inventor - Legends of Runeterra: guide to the best champions of Piltover and Zaun

Professor Heimerdinger is a scientist as bright as it is eccentric. Known for being one of the most creative minds in the region, he is one of the most acclaimed inventors Piltover has ever seen. Dedicated to his work to the point of becoming almost obsessed with it, he aims to reveal the most impenetrable secrets of the universe. Although his theories often appear strange, Heimerdinger has created some of the most miraculous machines (and lethal) by Piltover. He is constantly working to improve his inventions and make them even more efficient.

Heimerdinger focuses on his game entirely on its turrets, and consequently on spells. Despite being the most expensive champion in this region, and not too cheap in stats, his prowess is truly devastating. In fact, Heimerdinger is not made for direct combat but thanks to his ability he can summon its beloved turrets who will do the dirty work for you. Each time a skill is cast, a turret is created (Fleeting) in the summoner's hand, costing the mana used to summon it, but this turn costs 0. Once you have summoned turrets for a total power of 12+, Heim levels up keeping the same abilities, but granting + 1 / + 1 to its turrets.

Heimerdinger is perfect for fitting entirely spell based decks, therefore perfect for Piltover decks. Furthermore, Heimerdinger shows a particular affinity for Lux's spell deck (hence Demacia), combining the power of numerical superiority with the possibility of drawing numerous spells. The icing on the cake is the Heimerdinger card "Judgment Day", which allows you to draw 3 cards and reduces their cost by 1 Mana. Really devastating.

Jinx, the loose cannon - Legends of Runeterra: guide to the best champions of Piltover and Zaun

Jinx is the loose cannon by Zaun, an impulsive and manic criminal who lives to sow panic without thinking about the consequences. With an arsenal of lethal weapons, unleash the loudest and most spectacular explosions and then leave a trail of chaos behind. Jinx hates boredom and happily carries his personal pandemonium with him, wherever he goes.

Jinx is the most balanced champion in this region, comparing his cost to his stats. Thanks to his ability and his power, Jinx reveals himself as a card extremely aggressive, marked by an aggro style of play especially in the midgame. Thanks to the attribute "Rapid attack" it is capable of taking out most of the midrange cards without too much trouble. Jinx levels up when our hand it remains empty, and once she levels up her aggression reaches the next stage. In addition to gaining an attack point and maintaining Quick Attack, Jinx draws an additional card at the beginning of each turn and every time you empty your hand, create a "Super Mega Rocket of Death" which deals 4 damage to the enemy Nexus and 1 to other enemies. Really devastating.

Jinx is suitable for two different playstyles, but both of them functional to her abilities. The first is that of the mazzi discard, that is, discard most of the cards to unlock Jinx's full potential and destroy the opponent quickly. For this strategy, Jinx goes perfectly with the Noxus discard deck in combo with Draven, or with that of Teemo. The second is based on spells, especially economic ones, to quickly empty the hand and at the same time contain the opponent's attacks. Piltover spellbased decks with Ezreal o Teemo.

Teemo, the quick scout - Legends of Runeterra: guide to the best champions of Piltover and Zaun

Teemo is one yordle who explores the world with enthusiasm and glee, without fear of even the most dangerous and threatening obstacles. Blessed with an unwavering sense of morals, he is a fierce supporter of Bandle's Scout Code, and sometimes fails to realize the broader scope of his actions due to enthusiasm. Some say the existence of the Scouts is questionable, but one thing is certain: Teemo's determination is not to be taken lightly.

Teemo is the most squishy and cheapest champion in the game, however 1 cost of mana, has 1 power point and 1 defense point. In keeping with League of Legends, Teemo comes with "Circumvention" to resist opposing attacks, although its main purpose is not to directly attack the opposing Nexus. The style of play to be adopted with Teemo is long-term, based on the late game and based almost exclusively on spell cards. Teemo-centric decks often revolve primarily on paper "Poisonous Pop", in combination with the champion's ability. In fact, every time Teemo hits the opposing Nexus place 5 of these poppies in the opponent's deck. Each time one is drawn, one point is dealt to the opposing Nexus. Once you have placed 5 Pops in the opponent's Teemo deck level up, doubling the number of pops each time it hits the Nexus.

The most frequent (and also the most functional) style of play for teemo is that of tend towards the late game while for the rest of the game they placed as many Poisonous Squiggles as possible in the opponent's deck. To do this, the best strategy is to build the deck with cards designed to counter the enemy's attacks, to last as many turns as possible. The champions who most demonstrate synergies with Teemo are Jinx ed Ezreal, therefore both tied to the Piltover deck. A good alternative can be the Piltover-Freljord mixed deck with Tryndamere paired with Teemo.

The day of progress

Well friends, this was our latest guide on the best piltover and Zaun champions in Legends of Runeterra. We hope we have been useful for one last time in giving you an idea on how to best structure your deck. In addition, we invite you to consult our other guides on the champions of the other regions of Runeterra that we leave you below:

Please keep experimenting with the cards that you think can show strong synergies with the champions we showed you today, and stay tuned with us on Holygamerz for more news, updates and much more on the world of video games. Bye and good luck!

Fortnite Season 9 Week 4: guide and map to the challenges

Add a comment from Legends of Runeterra: Guide to the best Piltover and Zaun champions