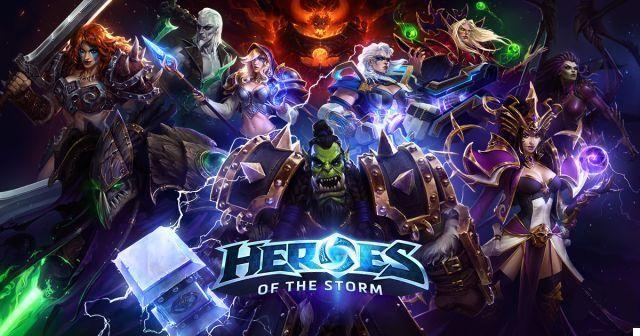 Below we will show you all Battlegrounds of Heroes of the Storm. All fields are inspired by the various games of the world Blizzard and each has its own peculiarities. Let's find out together.

Heroes of the Storm: let's discover all the battlefields together | Guide

From Infernal Altars to The Lost Cavern. Let's find out the advantages and disadvantages of Heroes of the Storm maps.

This is a map a three lanes in which there are three infernal altars which, periodically, during the game one at a time can be activated by the players. Once activated, the players will have to face some NPCs generated by the altar, the team that, first, manages to defeat 40 of them, gets the help of the Punisher. He attacks the heroes and enemy structures, there are three different types of Punisher: Mortar, Freezing e Arcane.

This is a very large map a four lanes where gods can be collected dobloni (through chests, special fields, conquering mercenaries or stealing them from the enemy heroes) once collected, they must be delivered to Captain Cuornero. After your squad has delivered enough doubloons, Cuornero will bomb the enemy forts.

Battefield of Eternity - Heroes of the Storm

Map a two lanes, with a central arena where two periodically face off Immortals (one per team) the Lieutenant Angelico Ilarian and Demon Lord Beleth they face each other in an eternal conflict. Each player can attack the immortal enemy and / or defend their own: when one of the two immortals is defeated, the surviving one gets a shield proportional to his remaining health and marches against the enemy defenses, protect the immortal while wreaking havoc on strong enemies .

It is a map a 3 lanes. In the upper and lower lanes there are two altars that activate periodically. If conquered by a single team, they give them access to the altar in the middle lane, where a player can temporarily take control of the Dragon Knight, which has enhanced attacks against both structures and enemy units. Use the immense power of the Dragon to take down strong enemies.

Detachment of Braxis (Braxis Holdout) - Heroes of the Storm

Map a two lanes, which outline a central arena. Periodically, they are activated two signalers; when a team controls them both, of the troop zerg allies of the squad reach a containment area; when one of the cages is full, they both open, releasing waves of zerg against the enemy base. Withstand waves of enemy zerg while you help yours, the zerg attack the heroes.

Map a three lanes. In each lane there is a platform that is activated periodically, and by pausing on it, the players activate a timer; the team that manages to carry the timer 100% gets the controller of a protector Triglav, a giant robot that can be controlled by two players (the two players have three different abilities each, and the movement is controlled by the first of the two). The skills of the Protectors inflict terrible damage to structures and heroes, use them to take down the enemy.


Garden of Terror - Heroes of the Storm

Three-lane map characterized by a day-night cycle. At night, several "mutants" appear that players can kill to retrieve seeds. Collecting 100 seeds will allow the team to temporarily summon a powerful Arboreal Terror (maneuvered by one of the players). Tree Terrors instantly spawn in every lane, they can disable enemy towers and forts.

This is a small map a two lanes. Four entrances open at regular intervals to enter a mine populated by not dead and one GI am. When killed, they drop skulls (100 total) for players to collect. Once the two teams have collected the 100 skulls, two Golems will be summoned (one per team), whose strength will be proportional to the number of skulls collected by the team.

A map a three lanes inspired by Alterac Valley, a battleground of World of Warcraft, in which the cores of the two teams are replaced by a boss each Vanndar Piccatonante on the one hand and Drek'Thar on the other. Bosses have armor that is reduced for each fortress destroyed, and they regain lost hit points if an attack against them fails to defeat them. They appear regularly on the map two prisoners, one per team: each team must free their prisoner, and at the same time prevent the opponents from doing the same. The team that succeeds first gets a cavalry charge, the cavalry soldiers charge in all lanes, providing a bonus to damage and movement speed to nearby allied heroes.

Map a three lanes where different nuclear devices are periodically spawned on the battlefield, which can be collected by players and activated anywhere on the map, generating an explosion that inflicts considerable damage; if a hero is killed while carrying a device, it falls to the ground and can be picked up by any other player.

This is a map a three lanes. In each lane there is a temple that activates periodically and that can be conquered by the players defeating both the NPCs guarding the temple and the opposing players who attempt the feat, hold your position and the temple will unleash a powerful attack on strong enemies. THE Guardians they will try to wrest control of the temples from you. Keep them at bay to conserve the power gained!

This is map very large two-lane and is inspired by Overwatch. A load, stay next to the cargo to bring it to its destination and prevent the enemy from doing the same. Once the cargo reaches its destination, will open fire on strong enemies.

Map a three lanes. Among the minions of each team are mechanical spiders which, when killed, drop gods Jewelry which must be collected and then delivered to two altars on the map. Once collected a certain number of jewels Spider Queen will summon three Weavers one for each lane allied to the team that has completed the collection, which will attack the enemy defenses.

Torri della Rovina (Towers of Doom) – Heroes of the Storm

Map a three lanes in which the cores are inaccessible to the opposing heroes because they are protected by a barrier. Each team has bell towers (the Forts of the other maps) which, when destroyed by the opposing team, come under its control. Periodically, of the altars will emerge on the battlefield, activate them to make yours towers open fire on the enemy core. The team that succeeds in the enterprise brings their bell towers to bomb the opponent's core.

This is a very large three lane map. Periodically, gods are generated tributes in one of four preset positions on the map. Once a team has collected three, the Raven Lord will temporarily curse the enemy team, lowering minion health to a minimum and disabling enemy towers and forts.

Map with a single lane focused on direct confrontation between players; there are no mercenaries nor is there the starting area, where players can teleport and heal. Orbs of regeneration appear in certain places on the map (only available for Custom Matches).

Heroes of the Storm: battlefield guide

Add a comment from Heroes of the Storm: Battlefield Guide | Guide