Far Cry 6: how to stop the Amigos

Saludos, amigos: here's how to stop Far Cry 6's walking zoo in gameplay moments when we want to take back our intimacy

A dog follows us because it follows its instincts, but it does Friends di Far Cry 6 they just don't want to know stop them: you may want to know how to explain the hint. These pets (ranging from domestic dog to alligator ... not quite domestic, let's say) stand out in a variety of ways, but sometimes their loyalty leaves players desperate. Well, in our guide we are here to explain how to control them, change them or even send them to hell. Not necessarily in that order, of course. It won't be a long explanation, but if you want to overthrow Cub's government… eh, Yara in the company of the beasts, here's what you need to know.

Several chapters prior to Far Cry 6 have a handy command to stop the equivalent of the Amigos, but in this episode of the saga you may not know how. Simply, while the leave system from previous games was quickly accessible, this time it isn't. If you want to tell Chorizo ​​to turn around with its adorable paws, you'll need to stop the action first with the break menu. At this point, use the dorsal keys to reach the section of our four-legged friends (two, in the case of Chicharròn and Chorizo). Waiting for you, you will find a list.

Who is following us? - Far Cry 6: how to stop the Amigos

In this list reside the locked Amigos and the unlocked ones. If one of them is following you, on their image you will find a blue marker. Moving the cursor over the image in question will bring up the option you are looking for: the one to say goodbye to your guide animal. To complete the order, you will have to hold down the front button at the bottom, whether it is the X (sorry, cross) on PlayStation or the A on Xbox. In practice, it is the equivalent of all the times we had to send the dog that followed us back home to the school bus ... 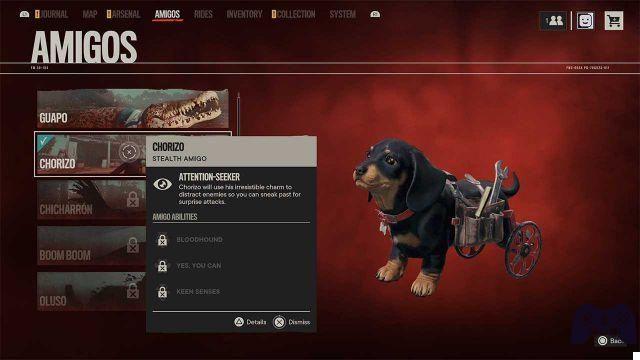 You can also check them - Far Cry 6: How to Stop the Amigos

The Amigos also boast control options - you might want to know how to stop these stubborn daredevils, but Far Cry 6's pets are smarter than you might suspect at first glance. The key resides in a controller push-button panel now increasingly relegated to the very small navigation of the menus: we are alluding, if it were not clear, to the directional cross. Here, too, you will have to hold down one of the four buttons, and in this case it is the one of right. The control, however, does not go beyond the simple possibility of calling them to itself.

Not that this is bad; we're glad we can change our minds after chasing them away. Either way, you will know that you have called them to you because… well, they will come. Also, just to make things more adorable (yes, that goes for that Guapo reptilian trap too), the puppies will be in good company: next to them you will see theblue paw icon. In short, by sending one home and calling another it should be possible to alternate them manually. Is there a quicker and more immediate way to do it? 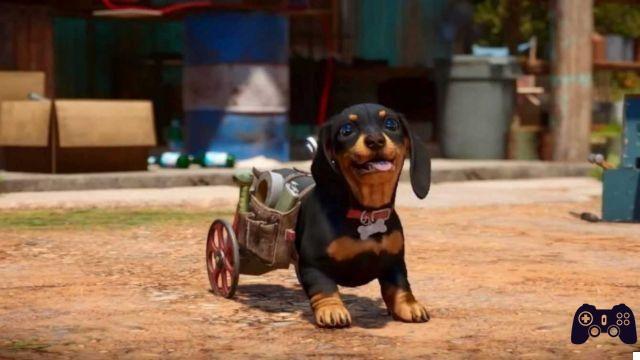 … no, can not be done. Everything must be done step by step: the menu is the same, and once you have entered the command to dismiss one of the Amigos, you can select another. All of this, of course, requires a long press of the button. The Amigos are many, many of which have not been seen in the promotional material. To unlock the latter requires to meet them and, usually, to carry out a short quest to be able to hire them.

Far Cry 6: how to play in third person ❯

NBA 2K22: guide to the best build from Small Wing

Oddworld Soulstorm: how to unlock all endings

Add a comment from Far Cry 6: how to stop the Amigos