Beyond Blue review, at the bottom of the sea!

We had the chance to play Beyond Blue, the E-Line Media title halfway between the documentary and the adventure video game, and this is our review

Beyond Blue, new title by E-Line Media, aspires to both entertain and raise awareness among players on a sensitive topic like the oceans. The development team, for the occasion, was supported by a team of experts made up of marine scientists and biologists as well as the BBC team author of Blue Planet II. Equipped with a strong narrative component, Beyond Blue starts off on the right foot and then slowly drowns in a sea of ​​uncertainties, and this is our review.

Let's start with the basics. Beyond Blue is a diving simulator in the third person, characterized by a good adventure component. Set in the western Pacific Ocean, we find ourselves taking on the role of Mirai, a marine biologist. Mirai's job is to collect mainly information on whales, without neglecting the rest of the marine fauna. Together with a team of scientists and other biologists, with whom the protagonist is constantly in contact, our aim will be to study and document information on whale families by recording their songs and monitoring their habits.

The Beyond Blue story arc is divided into 8 missions interspersed with Mirai's return to base (or rather, by submarine). Some of these missions are also broadcast on "social" in streaming with a lot of question and answer live. Beyond that, the narrative component of the game turns out distinct and evident right away, with the protagonist who often finds herself talking to her sister about their life. Here, alas, we find the first small flaw in the game.

Immersing ourselves in the dark and silent waters of the ocean, we imagine an experience intimate and introspective. In this case, however, the set of voices, the slightly abusive narrative and the few details of the underwater, preclude us from diving deeply into the gaming experience. The intimacy typical of solo diving is tainted by this constant flow of dialogue between characters, which takes away its (potentially) most powerful medium from the game. Really a pity. 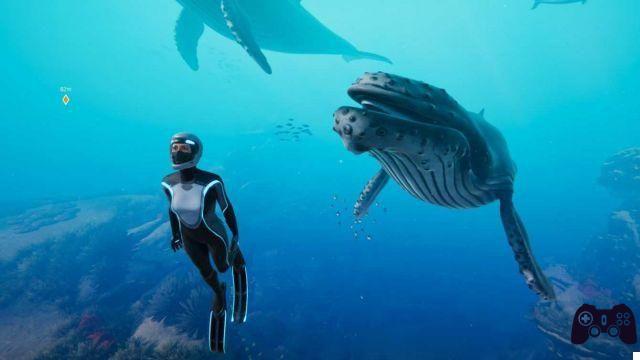 Gameplay Bomb Dive - Beyond Blue Review, Under the Sea

As already mentioned, the story of Beyond Blue is made up of 8 missions, for the total duration of 4 hours. The missions, in addition to bringing the player into small micro-systems different from each other for creatures and atmosphere, contribute to deepen the story and the narrative arc of the game. The map exploration system proposes some "Control points" present in some games such as Assassin's Creed or Far Cry.

Here, however, instead of the control towers, we find underwater buoys. It is also possible to locate various points of interest (animals or areas) in order to continue the mission. Once we have identified the creature we are interested in, one may be required further scan via probe or drone.

Here we collide with two other problems of the game. The first is related to the little variety of environments. We understand that deep blue is difficult to characterize and can be decidedly monotonous, but in Beyond Blue the designers seem not to have struggled to find a solution. The environments turn out empty, bare at best and we often find ourselves walking along obligatory long roads (such as rocky corridors), to emerge again in the middle of total nothingness. Furthermore, the only activity available to us is to analyze the animals of the marine fauna, which brings us directly to the second point.


The second issue concerns the gameplay itself. As mentioned, the only gameplay mechanics the game is based on is: start the mission, find the creature, scan. And so on again for 8 missions. Unfortunately, the game runs aground on this general layout and the impression is that of watching a showcase of creatures marine. Furthermore, due to the paucity of the environments, the exploration of the seabed (which could be an interesting variant of the monotonous routine of the missions) is neither enhanced nor encouraged in any way. 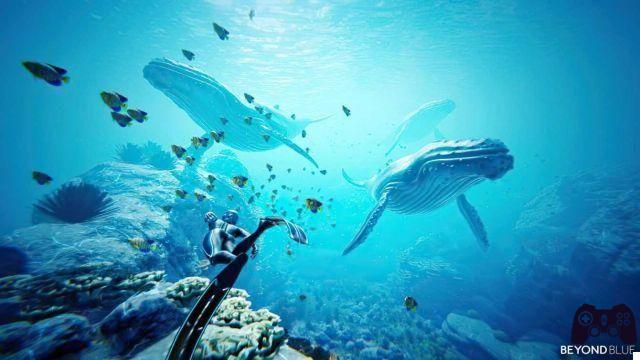 Technically… - Beyond Blue review, at the bottom of the sea

On the technical sector of Beyond Blue there is a small clarification to be made. This game was released on Apple Arcade in April, to be ported up PC, Xbox One and PlayStation 4 only later. Effectively, then, Beyond Blue is a port from mobile to console. Due to this nature, the graphics are not up to the current generation despite the porting being successful.

The console version of the game shows all the limits of an assumed mobile graphics, regardless of the models examined. The characters turn out unrealistic, the details of the marine fauna leave something to be desired and the animations turn out cumbersome and unconvincing. Here too a wasted opportunity, which leaves a bad taste in the mouth of those who really wanted to feel at a depth of 200 meters surrounded by marine creatures.

The only noteworthy feature, in this regard, is that of extra content. During the game you can access the short gods video documentaristici (produced in collaboration with the BBC) that shed light on the true nature of the game: raise awareness of users on the problem of pollution of the seas and on climate change.

These clips offer a realistic perspective on what is happening to our planet, and the biologists and scientists who narrate the off-screen clips provide interesting data, trivia and information. In the end, however, we realize that the sentiment and the popular spirit of these videos are not best translated in the game, and this increases the bitterness in the mouth a little more. 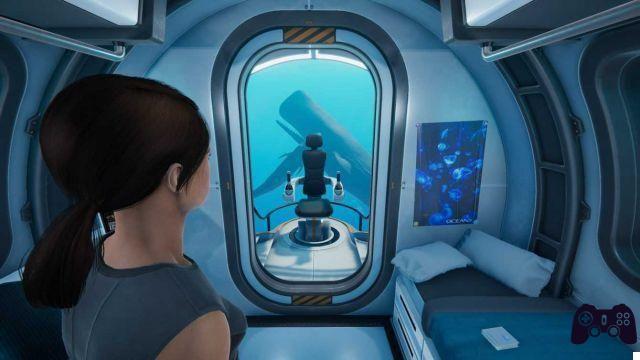 At the end of this Beyond Blue review, we are ready to take stock. E-Line Media's underwater game has many small flaws, which put together make a puzzle not really great. The narrative component is interesting but a little too abusive, the technical limits are felt and the monotony of repeating the same activities for hours tired before the time. The information campaign integrated with the videos is a great idea, but it ends up highlighting the remaining gaps in the game.

While Beyond Blue is not a great entertainment work, its popular nature makes it an excellent educational tool. The title shows great care in the information component and in raising awareness of the current problems of the oceans, but unfortunately it fails to involve and entertain as desired. If you are looking for a few hours of fun and entertainment, we do not feel like recommending this title. On the contrary, if you are curious to deepen the subject and immerse yourself in an experience instructive as relaxing as it is (thanks also to the contribution of the BBC), Beyond Blue is the game for you.

Even today we have reached the end of this review! As always, we greet you and remind you to stay tuned to Holygamerz for more reviews, guides, news and much more from the world of video games. Hello and good diving!

6 He teaches without entertaining

Resident Evil 3 Remake: how to dodge and deflect attacks ❯

Add a comment from Beyond Blue review, at the bottom of the sea!