In Assassin's Creed Valhalla the Order of the Assassins returns to have an important role in the narrative. This is thanks to a storyline that is intertwined with the main adventures of Eivor, often remaining in the shadows, but still present.
One of the objectives that will be entrusted to you almost immediately is to find the old studies of the Occult scattered around England. These are almost always found near large settlements, but let's see in more detail how to find them in this one Assassin's Creed Valhalla study guide for the Occult.

Where to find the Studies of the Occult

As we said, the studies of the Occult are located near the large settlements grown on the ashes of the Roman Empire. Hence, very often they are hidden in the sewer system of these places of interest, where the Order could work quietly, away from prying eyes.

In all, they are present six studios scattered around England. Finding them will allow you to complete the mission Brief History of the Occults entrusted to you by Hytham, for which you will have to recover the six parts of the Codex Magas. In addition, you will have access to various rewards, including the set ofArmor of the Occult.
During our game outside of the Animus we came across a document inside Layla's computer that showed the six locations where the studios are located. The names of the cities are modern ones, but it takes little to associate them with their XNUMXth century counterparts.
The places are Ledecestre, Lunden, Wincestre, Jorvik, Colecestre, and an unspecified place of Glowdecestrescire.

The first study you will probably come into contact with is Studio di Ratae, Ledecestre.
In the eastern part of the city, you will find an ancient Roman ruin. Here are the remains of a monoptero. The iconic symbol of the Assassins is engraved on its pavement.

Among the ruins (basically in the direction the symbol points to), you can see a pulley. Use Odin's Sight and hit the point indicated by the red halo with an arrow. The structure will collapse to the ground, opening a gap in the floor hidden among the ruins.
Enter and follow the road until you arrive at the actual studio. Remember to not only take the piece of armor, but also the Codex page.

Near the Lunden aqueduct, north-east of the city, you will come across the Londinium study, one of the most important poles of the Order at the time of the Roman occupation in Britain.
The entrance is surrounded by a wooden fence, so you will have to climb on it and take the usual leap of faith.

Once inside, dive until you get to the flooded main hall. Since the door to the study will be closed, dive in again and break the fragile wall under the water. This opening will take you to a corridor where you will need to do a little parkour job to reach the opening that will take you to the studio.

We also point out the presence of a chest in the pool of water under the suspended platform that will allow you to start the acrobatic course.

In the ancient sewers of Jorvik hides him studio di york.
It took us a while to find it (as the armor and ingot symbols were quite far from the access point), but we discovered a destructible pavement south of the amphitheater, near the boundary wall.

Break the surface and infiltrate the studio. Once you reach the main room (the one filled with water), head to the northeast corner. Here you will find one of those movable structures.

Once you arrive in the actual study, look for the keys, useful for opening both the chest with the ingot and the door that gives access to the Codex page and the piece of armor.

In Colcestre, the city of Essex still extremely clinging to the Roman architectural system, is the Camulodunum study.
The entrance, also in this case, is in the south of the city, inside an ancient building in ruins. Blow up the surface that gives access to the dungeons and begin the descent.

The path will take you inside a room partially submerged in water. You will need a key to access the studio. Retrieve it with the help of Odin's Sight and follow the acrobatic path to reach the locked door.

The capital of the kingdom of Wessex where King Ӕlfred resides was also once one of the headquarters of the Order of the Occult. The Studio di Venta Belgae it is located south of the Church of San Pietro, inside what looks like an ancient Roman well.

Dive in and continue to stay immersed, following the underwater passages that will allow you to access a new area. A fragile wall is all that will separate you from the studio. Find a jar of oil (or use the blast arrows skill if you have it unlocked) and that's it.

We left this studio for last because it is located in one of the most difficult areas of the game (the level of the enemies is 220).
The only one of the group who is not near a city, it is Study of the temple of Ceres is located west of Glowecestre. It is difficult not to notice it, since at the entrance we find two large statues and on the stone floor, instead, the symbol of the Assassins is engraved.

Once inside you will notice a locked door. That is your way out. To enter, however, you will have to slide under a crack in the wall on the right. After this area, be careful, because the rooms will begin to be impregnated with a toxic gas that will cause you to lose a lot of health points.
Collect as many mushrooms as possible, easily identifiable and present in large quantities within the structure. Also beware of using the torch: the gas is extremely flammable (which you can also use to your advantage, perhaps throwing the torch into the next room to temporarily eliminate the toxin).

To proceed and get to the actual study you will have to blow up some destructible walls. You can do this by using the oil jars in the building. Remember to light the torches placed on the walls to be able to find your way faster and avoid getting lost in the sea of ​​gas (obviously, we repeat, do not light the torches in these areas, but only in those without the toxic substance). Once this is done, head to the studio and pick up the Codex Magas page and the piece of armor.

Remember to exit through the door you saw when you entered the facility. Eliminate the wooden block that seals it and return to Hytham.

The Codex Magas and an old comeback

Once you have set foot in your Ravensthorpe settlement, go to Hytham and give him all six pages of the Codex Magas. He will thank you and tell you to reach Reda, who is in possession of one old letter. We don't want to reveal the content to you, but it will certainly make fans of the new trilogy happy.

The armor of the Occult

The prize that will surely have prompted you to complete this mission is the set of theArmor of the Occult, also complete with a very particular short blade and, above all, fast.

Distinguished by a green fabric with gold details, the armor is very opulent, something one would not expect from those who intend to "hide in the shadows to serve the light". However, it is extremely pleasing to the eye.

You also have the possibility to upgrade it both through the inventory and by bringing it to Gunnar, who will improve it in exchange for the indicated ingots (the visual aspect is the final one, so this last procedure will not give you access to aesthetic variations of any kind) .

This was ours Assassin's Creed Valhalla study guide for the Occult. Let us know if you've found them all and what you think of the armor! 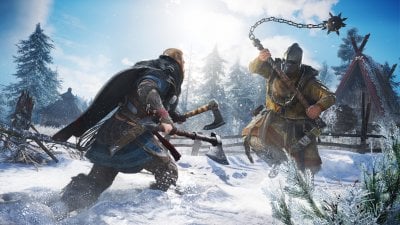 Assassin's Creed Valhalla, guide to the game of Orlog ❯

add a comment of Assassin's Creed Valhalla, guide to the Studies of the Occult