The pull that mini-games can have on players is fascinating. Often, more time is spent doing this type of activity than completing the main objectives (think of the Gwent from The Witcher 3: Wild Hunt, for example).
The new chapter of Assassin's Creed offers several minigames scattered around the lands of England, including a very interesting dice game: the Orlog. Let's try to understand the mechanics and the most effective strategies in this one guide to the game of the Orlog of Assassin's Creed Valhalla.

What is the Clock

The Orlog is a dice game based on the strategy, the cunning and also the luck of the players.
Designed as a sort of battlefield, the game table is divided into two areas, one for each player.
The first to roll the dice is chosen by a simple toss of the coin (heads or tails). Once you have rolled the six dice, you have the possibility to choose how many we want to keep and how many we want to raise. In all, there are three raises available, in turn with the other player.
Divided into three phases (the roll of the dice, divine favors and the resolution of the battlefield), the goal is defeat the enemy commander, or the other player, taking away all his life (marked by fifteen small stones positioned next to the playing field).
Borrowing a little from different games, both card and dice, the Orlog is a quick and interesting pastime, which, if you like the genre, will take several hours of play away.

The dice faces are divided into axes (close attack), arrows (ranged attack), armor (defense against close range attacks), shields (defense against ranged attacks) and hands (possibility of stealing divine favors from the opponent) .
Additionally, some faces will feature a gold frame. The latter means that you will be given a token to be spent on divine favors at the time of resolution.

During the game, the opportunity to invoke divine favors will arise. These are basically extremely effective powers which will help you defeat your opponent in less time.
Depending on the god you ask for help (which you will unlock by defeating other players or exploring the game world), you will have different options, more and more expensive based on the power of the effect.
You will start with a simple instant attack, which will allow you to inflict two, five or eight damage on your opponent for a cost of four, eight or twelve tokens.
By unlocking new divine favors, you can choose up to three gods to bring into battle, depending on the strategy you intend to use.

Once the divine favors have been invoked, it's time to calculate the damage dealt during the turn.
First of all, tokens useful for divine favors are awarded. Then, the dice played by the two players are associated not according to their placement, but according to their nature. Hence, axes are associated with armor and arrows with shields. If a player has played, for example, three axes and the opponent only two shields, damage will be inflicted on the latter's life. Same goes for arrows and shields.
Once the damage is calculated, you move on steal tokens for divine favors, if someone has played that face of the die. Once this procedure is completed, the effects of divine favors are applied, but only on condition that you still have the amount requested during the invocation (if you have fewer tokens, perhaps because they were stolen during the resolution, the divine favor will not be able to be invoked).

The game of Orlog, at least at the beginning, is not extremely difficult, but it can get more and more complicated as you meet new players.
Surely you don't need advice, but we still want to show you our strategy and give you some tips, especially for those who are only starting to approach it now.

This is, broadly speaking, the game of Orlog and how it works.
In the game, the game mechanics are explained quite in depth, but, to be honest, we just wanted to find an excuse to know your strategies and apply them during our games, as we know that among you there are already potential champions of one. of the most addictive minigames in Assassin's Creed Valhalla. 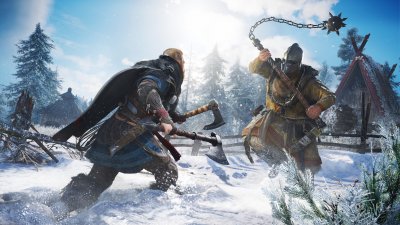 Assassin's Creed Valhalla, guide to the Lord of the Rings mission ❯

add a comment of Assassin's Creed Valhalla, guide to the game of Orlog