Super Mario 64: how to find all the stars of Snowy Earth

Between snowmen and igloos. Here is our guide to the location of all the stars in the Snowy Earth picture from Super Mario 64

The arrival on the market of Super Mario 3D All Stars has brought the three-dimensional platformers of the mustachioed plumber back on the crest of the wave, even if many years have passed since its release. Obviously there is one among them the progenitor of 3D platformers and many of you will need a hand to track down all the hidden stars within the levels. In this guide we will give you the location of all the stars of Snow Covered Land by Super Mario 64.

Snowy Earth is area number 10 of Super Mario 64 and, like all areas, contains a total of 7 stars. To reach this level it is necessary unlock the first floor of the castle defeating Bowser for the second time. It will then be necessary to collect a total of 30 stars and complete "Bowser in the Lava Lake".

You may not have noticed the presence of this layer, as it is hidden on the map. Take a good look at the room where there is a large mirror. You will notice that in the reflection there is a painting, which however does not appear to really be in the wall. That painting is the very entrance to Terra Snowevata, go to the position where there should be this picture visible only in the mirror and enter it by jumping. At that point you will have arrived in the Snowy Land and you can collect all the stars. 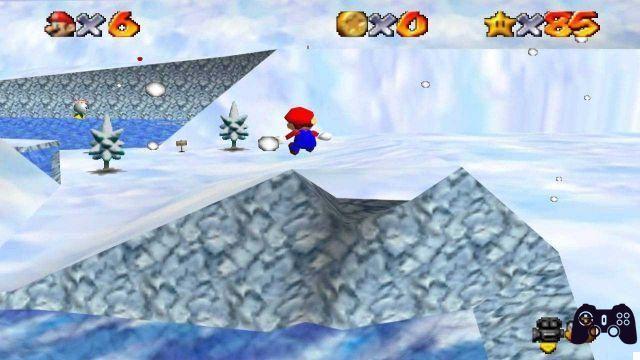 The puppet has mounted its head - Super Mario 64: All the stars of Snowy Earth

Let's start right away with a slightly frustrating star. The center is nothing more than a snowman. The goal is to bring this puppet's head to the top. When you get the head keep climbing and you will find an icy platform with a penguin crossing it. To overcome the obstacle you will have to walk together with the penguin, who will cover you from the blow of the snowman.


In the event of a fall you will have to go a long way againhence the frustration of this mission. However, once you become aware of the method it shouldn't take too many tries to overcome the obstacle. At that point you can get to the top, where you will find the star waiting for you.

Cool down the hot spirits - Super Mario 64: All the stars of Snowy Earth

Let's continue with the Snowy Earth stars of Super Mario 64 with a rather simple one. To the right of the start of the level you can see a platform with a frozen water lake. Above there will be a Bronchus of ice. It is nothing more than a Bronco that you have already found in some levels already played, so you shouldn't have problems beating it. 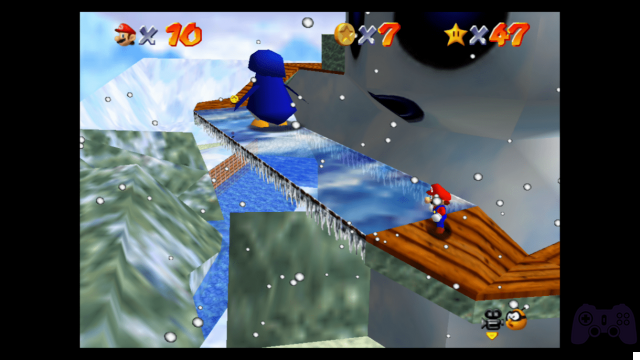 The Ice Cube - Super Mario 64: All the stars of Snowy Earth

This time to the left of the starting point there is one large ice texture. You have to look for a hole inside this structure and try to make your way through the maze. To succeed you can take advantage of the fact that ice is semi transparent and will give you directions on where to go.

However, there is also an alternative to entering from the side, as there is also a hole on its top. To get to the hole at the top you will have to make a triple jump with the right timing, or use a backflip. Once at the top, just jump out of the hole to reach this star.

Fly past the frozen lake - Super Mario 64: All the stars of Snowy Earth

to get this star you will have to reach the area beyond the frozen lake. This area is to the right of the starting point and is too difficult to reach with a normal jump. The only way to get there is to use the Spindrift (the enemies with the flower on their head). In fact, by jumping over the Spindrift, Mario is able to perform a Jump Screwed.

Use this move to get to the otherwise unreachable area. You can find two Spindrift right nearby, so it shouldn't be hard to make the leap. In this area there are some blocks and the one on the left contains your star. Once you know the trick it is very easy to complete this mission as well. 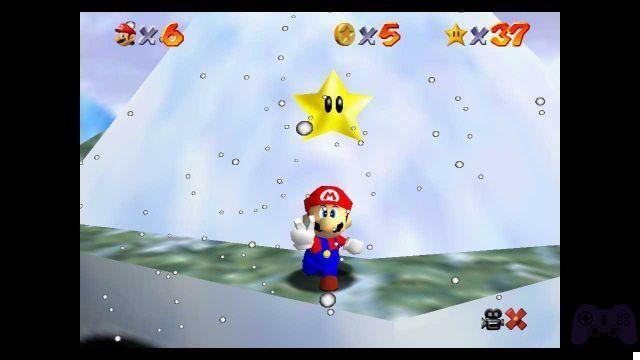 Snowboard on the shell for the red coins - Super Mario 64: all the stars of Snowy Earth

The fifth mission of the stars of the Snowy Earth of Super Mario 64 is self-explanatory even with the title alone. This is the classic mission that requires you to collect the eight red coins scattered around the map. In this case you will need to use a shell to collect these stars. The shell is obtained right in the raised area of ​​the previous mission. While the block on the left contains the star, the one on the right contains the much desired shell.

At this point follow the trail of red coins with your shell also extending under the platform with the Ice Bronco. He took the eight red coins the star will appear on the Star marker at the starting point of the level.

Inside the igloo - Super Mario 64: all the stars of Snowy Earth

To be able to get this star it will be necessary to have activated the blue switch of the mission "The secret of the moat", needed to make all blue switches visible in the game. To access the igloo you need the shell we told you about in the last mission. In the igloo you can find a hidden blue switch at the far right, who will provide you with the Ghost Hat.

Thanks to this hat Mario will become invisible and will be able to go through transparent walls. So you can reach the star locked inside the ice and complete the mission. Be warned though, as the Ghost Hat has a limited duration. If his power runs out while you are inside the walls he will knock you out and you will have to start over. 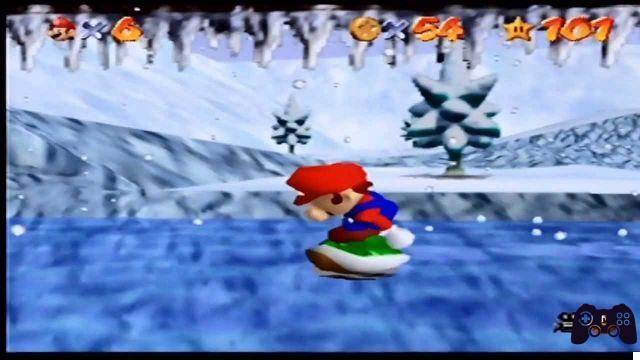 As in every level of Super Mario 64, the last of the stars is obtained by collecting a total of 100 coins. This level is the only one in the whole game in which there are no blue coins, which guarantee a nice loot to the player. You will therefore have to look for only simple coins to reach the goal.

There are over 20 coins scattered around the game map, which you can collect here and there as you explore the level. In Snowy Land, however, they are present as many as 69 coins inside the enemies. We therefore advise you to be particularly careful to defeat them all, to collect a very large amount of coins. As always, when you reach a total of 100 you will also get the seventh and last star and you will have completed the area.

This concludes our guide on the location of all the stars of Snowy Earth in Super Mario 64. Following our advice you should have no difficulty completing this level 100%. So continue to follow us on the pages of our site for this and other guides on the position of the stars dedicated to Nintendo's masterpiece. Let us know you are reliving with nostalgia the past years with this game or you are rediscovering today what it is in all respects a real pillar of videogame production. Finally, we remind you to follow us on Holygamerz for all the news from the world of video games and more!

Super Mario 64: where to find the Stars on the Rainbow Walk ❯

add a comment of Super Mario 64: how to find all the stars of Snowy Earth