Shadow of the Tomb Raider: Tips to Get Started | Guide

Shadow of the Tomb Raider is finally here. Are you ready to lead Lara in a fight for survival in the South American jungle? We have prepared for you a guide with the essential tips to start your journey in a great way!

Shadow of The Tomb Raider arrived in Spain and around the world on September 14th on PlayStation 4, Xbox One and PC after a rather interesting advertising campaign, and becomes the third episode of the reboot series starring Lara Croft. This new chapter of the saga brings news on the combat, stealth and adventure course, and it is likely that you will not notice from the beginning these new possibilities in the gameplay.

The stealth component has been accentuated and improved in this last chapter, and will propose new ways to eliminate your enemies or make you lose track. There are new tombs and crypts to explore; when you want to take a break from the main storyline you will have secondary missions to be solved, which will contain additional narrative elements and interactions with the secondary characters and the environment that surrounds you.

There are so many things to do in Shadow of the Tomb Raider; loyal fans may be able to juggle this new chapter for themselves, but we still wanted to give you some tips to get your game off to a good start, and introduce those playing the Tomb Raider reboot for the first time to the series.

Shadow of the Tomb Raider: tips for starting the game

Here are our tips for starting a new game! If you want an absolutely spoiler-free experience, we warn you that the following suggestions may contain references to the story or the game location.


It is impossible to complete an area on the first visit

Probably those who have played the other chapter of the series already know this, but it is useful to remember it. 100% completion of an area is a possible goal, but not immediately: you won't know all the skills needed for exploration right from the start and many paths, tombs or caves will only be accessible after passing certain points in history. We therefore recommend that you enjoy the main storyline, learn everything you need and then return to explore the area freely - and collect the various treasures it contains. 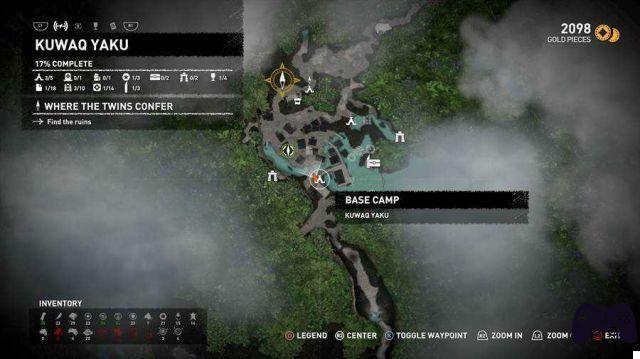 Take advantage of the modifiable difficulty

There are many ways you can play Shadow of the Tomb Raider - including playing the game on Hard mode. The game will allow you to choose the difficulty level of combat, puzzles and exploration, and SEPARATELY. You can make these adjustments before starting the game, or from the options menu during the game if you want a more challenging challenge. If the game is too easy for you - with the Instinct ability activated you will receive many hints - why not set exploration and puzzles on hard and see what happens? 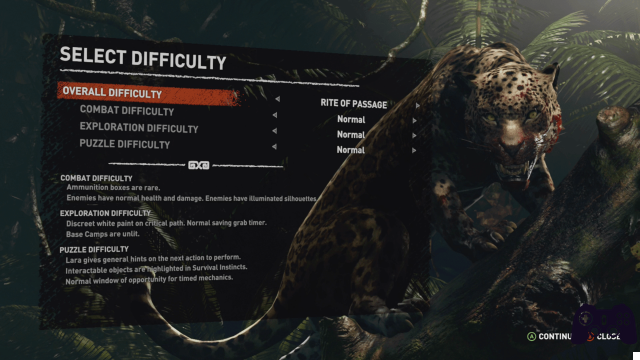 Stealth players, remember you can interrupt line of sight!

As we said above, the stealth component has been enhanced in Shadow of the Tomb Raider. Apart from the new tools that you can use, a particularly appreciated novelty is that of withdraw from a firefight and break the line of sight. What does it mean? When you come across a fight, don't hesitate to take refuge behind a wall and retreat to the bush. The enemies, no longer seeing you, will not chase you and from there you can develop a strategy to approach and eliminate them. 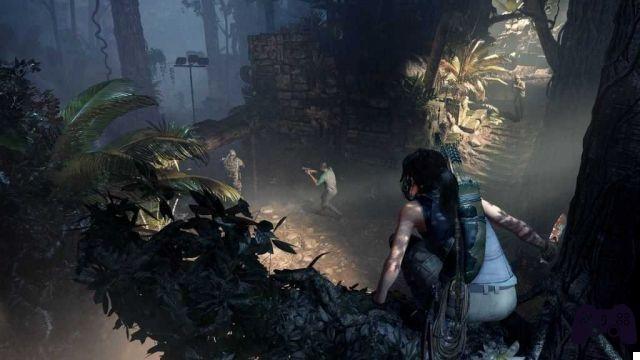 Focus on the skills that best suit your play style

At first glance the skill tree of Shadow of the Tomb Raider may seem difficult to understand. It is divided into three categories: Seeker (Blue), Scavenger (Green) and Warrior (Red). Seeker focuses on Instinct mode and exploratory skills; Scavenger is mainly based on stealth and the ability to create ammunition; finally, Warrior specializes in combat, improving Lara's physical and military skills.

Although there is nothing wrong with doing "a little for one", more selective growth may prove more effective. Try to figure out those skills you like or they help you more in the game and build a Lara to suit your style. Let's take a couple of examples. If you prefer stealth, you may find the Owl's Eye skills useful - to get a better perception of the environment - and Chain Assassination. If, on the other hand, you're more interested in collecting resources, Hoatzin's Hunger and Viper's Den could help you, as they increase the amount of material you might find around. Whichever strategy you prefer, try to choose your skills carefully. 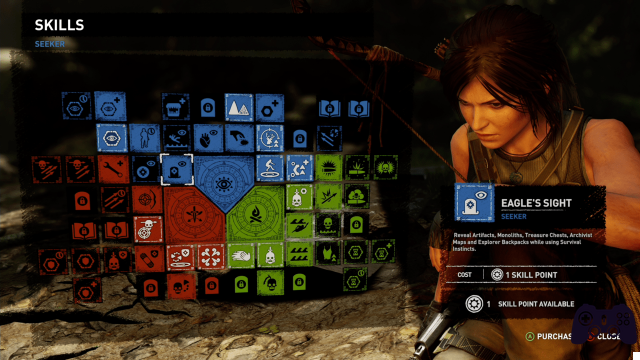 Explore the Tombs and Crypts

Tombs and Crypts were an important component in Rise of the Tomb Raider as well, but this time around the rewards you will get will be even greater. The puzzles will be more challenging and the platforming sessions more engaging - not only will they be fun to tackle, but they will offer you tangible benefits. Tombs will unlock special abilities in the skill tree, while Crypts will offer you special armor pieces that you can produce and wear. Explore the jungle and find them all, it will be worth it, believe me. 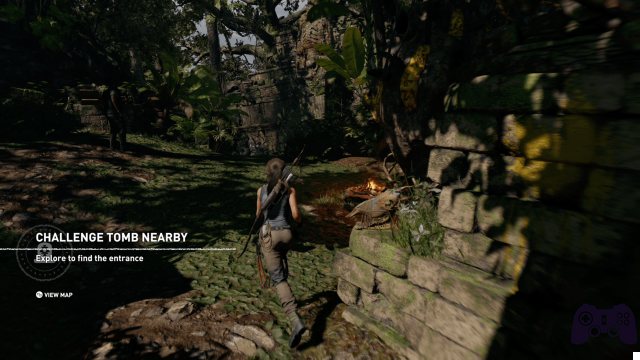 Don't forget the side missions

Whenever you arrive in a new city or complete an objective in the main campaign, a side mission will be unlocked. You will need some time to deal with it, but do it: the Side missions are a great way to earn experience bonuses, and will help you unlock weapons and equipment for Lara. Furthermore, some of these missions will be the only way you will have to discover Tombs or Crypts that, otherwise, would remain blocked. Finally, some side missions feature great dialogue and interactions with the NPCs you'll want to see. 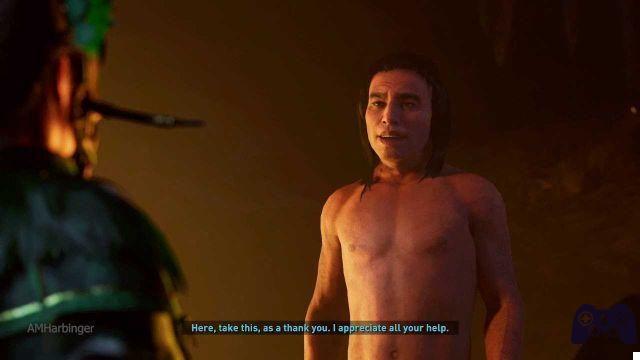 The grapple cord goes even lower, if you know which frets to press

The truth is, the game explains it to you, and well, but you will almost certainly forget what you have to do to extend the grapple rope. The problem is that you will have to press a bumper while climbing with the ice ax, in order to be able to drop down. Do not give in to instinct: if you release the button you will not fall down. Press the stick down and the string will stretch. Press the trigger and push yourself to swing. Et voila. 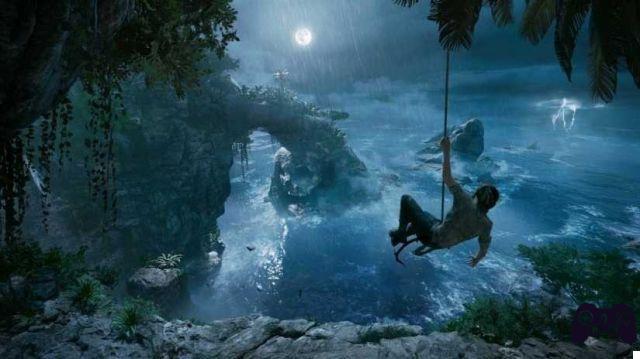 Survival Kits will be revealed by finding the Scout Bags

If you've played the previous episodes, you may know this too. Finding the Explorer Bags will reveal the hiding places of the Survival Kits on the map, so you don't have to look for them "by hand". Occasionally you will see some glitters in the distance, and there you will find the survival kits, but don't waste hours of precious time looking for them like this: focus on the bags. 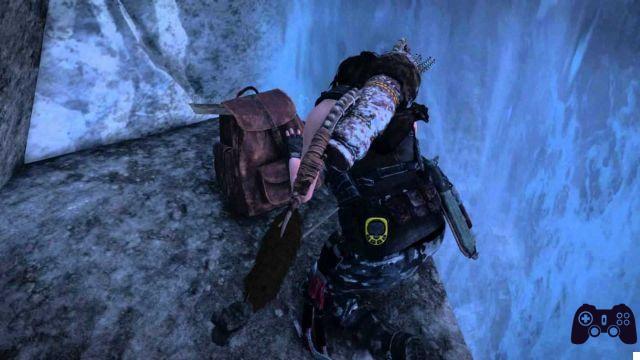 In Shadow of the Tomb Raider you will be able to produce special outfits that, when equipped, will improve some of Lara's stats. Each of them has a special ability; for example, some pieces will make it more difficult to locate, others will increase the likelihood of finding rare resources. We advise you to produce these dresses as soon as you get the chance, and then well, they make a certain impression. Look at this Condor set below, for example. 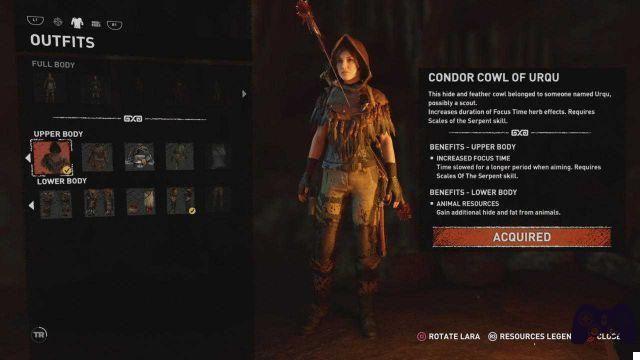 Since we are on the subject of equipment, we remind you of the presence of merchants: In addition to offering you ammo and resources, they will sometimes also have weapons and tools for upgrading in their stock. Visit them, or you risk missing out on some useful pieces. Example: in Paititi there is a merchant who will sell you an upgrade for your knife, which will allow you to cut the intertwined ropes that close the paths to the special areas. Another merchant in Kuwak Yaku has a gun silencer. Make sure you find all the merchants and see what they have to offer you; you never know what you might find useful. 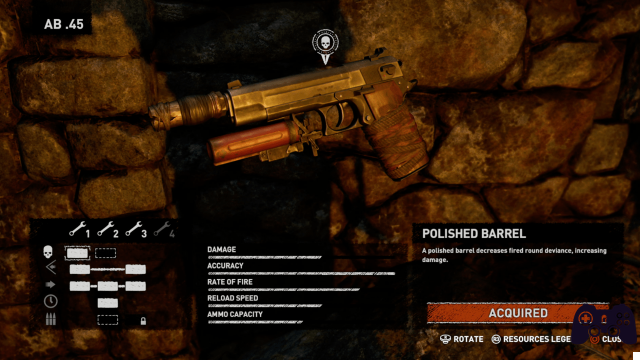 Upgrade your sawn-off shotgun as soon as possible

If we compare Shadow of the Tomb Raider to the other episodes of the series, we realize that here the enemies are faster: it will be difficult for you to aim and shoot, so you will want to invest in a sawed-off shotgun. Fast, powerful, deadly: the sawn-off shotgun is perhaps one of the most useful weapons, so always keep it close at hand. Upgrade this weapon as soon as possible and, if you can, try to improve the capacity of your ammo bags. 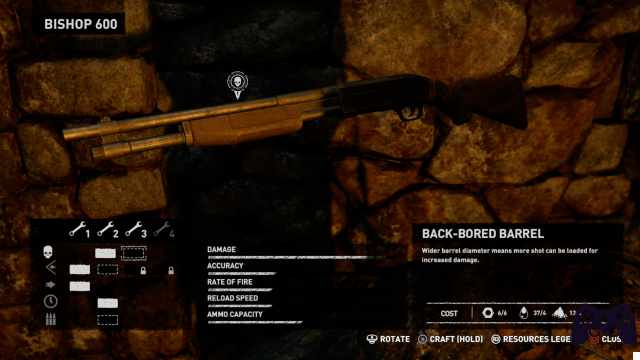 Since we are still on the subject of purchases, now let's talk about the sale. Remember to sell the precious materials what you find! It seems obvious, yet you will happen to forget it, taken as you will be by other things. Furthermore, the game does NOT specify that jade and gold can be used for sale. But that's exactly how it is. Do not accumulate indefinitely because it is so completely useless, and in addition you risk filling the capacity of the inventory, and potentially missing out on things that you really need. 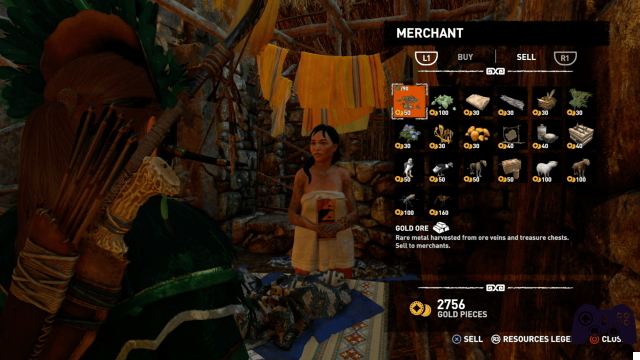 Once the Viper's Snare skill is unlocked, you will have the opportunity to use the many victims you leave behind as traps. Stuff the corpses with explosives or poison and, when a fellow soldier approaches, he will be hit by an explosion or a toxic cloud, causing you to get a stealth kill while you are safe and warm. That. Pleasure. 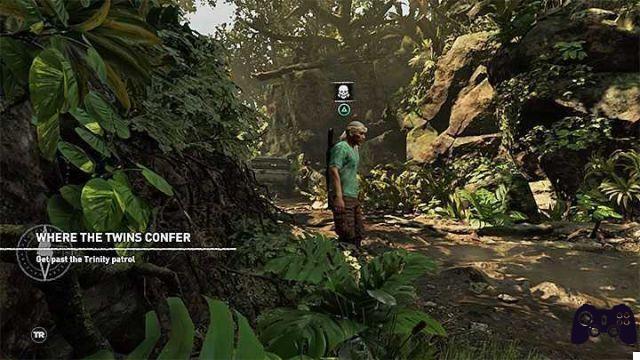 Animals have hearts too, and you have to strike right there

As in previous episodes, in Shadow of the Tomb Raider you will have to hunt for materials, and you will find that it is not as simple as it may seem. Sure, a headshot is a great help, but in larger animals it's not always the most effective method. To take down these animals you can take advantage of one of the abilities of the tree, which will allow you to "See" the heart and blood vessels of the prey. It won't get easy all of a sudden, but seeing more clearly where to hit is a start. 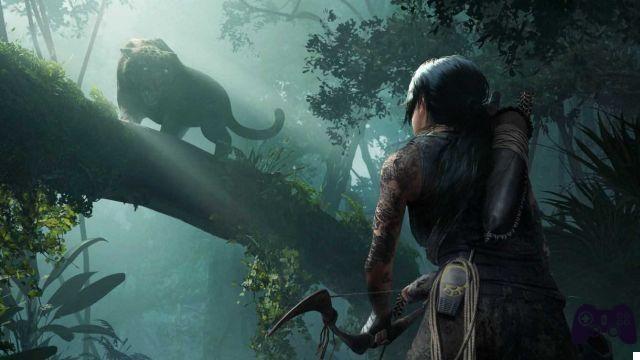 Song of Horror Episode 3: guide to solving the puzzles ❯

Doom Eternal: guide to the best mods for each weapon

New Pokémon Snap: how to get 4 stars by photographing Meganium

Destiny 2: items on sale by Xur from November 22th

Bleeding Edge: How to parry and dodge best

Add a comment from Shadow of the Tomb Raider: Tips to Get Started | Guide