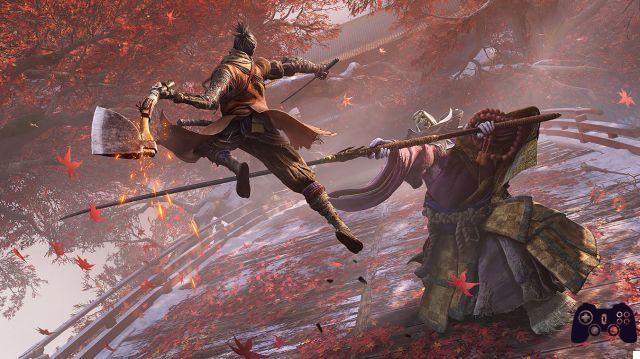 Page 20: Sekiro: Shadows Die Twice, how to unlock all endings

As with previous titles of From Software, also Sekiro: Shadows Die Twice it has more than a single ending to aim for. Depending on certain decisions, actions and conditions, the conclusion of the Wolf's adventures could change its course and end one way instead of another.

In light of the different possibilities present in the branded game Activision, below you will find a comprehensive guide to reach each ending.

The Shura ending is the first to be accessed throughout the story. Immediately after defeating the Guardian Monkey and the Corrupted Nun, just before it, you will need to return to Ashina Castle and climb up to the roof of the large tower where you fought Genichiro Ashina. You will find the Great Shinobi Owl waiting for you on the top and will ask you to choose whether to obey him or betray him in favor of Kuro. If you choose to follow Owl you will have to fight both Emma and Isshin in a fight to the death. By coming out as winners, you will have reached the Shura Finale and unlocked the trophy of the same name.

By choosing to betray Owl, you will have to fight him for the first time and survive. Then head to where Isshin is and overhear him as he talks to Emma. Similarly, eavesdrop on Kuro from a corner of his room and then go to rest.

Waking up, talk to Emma about Kuro in agreement with her, and then go back to rest again. Tell them again and head to the “Ancient Tombs” Idol to find Emma again to the left of the various tombs. Go back to the Ruined Temple and overhear Emma again from behind the building where you usually upgrade the Prosthetic Tools. Talk to her again and she will give you a bell to use at the Buddha statue.


Read also: Sekiro: Shadows Die Twice, how to defeat all the bosses

Once you're done talking and eavesdropping, head to where you fought the Moth. At that point Owl will appear again and you will have to defeat him. If you manage to defeat the Great Shinobi, you will get the Aromatic Flower to be used at the end of the adventure along with the Divine Dragon's Tears.

Following the directions in the final Purification, side with Kuro and defeat Owl. This time, however, do not go eavesdropping anywhere, rather continue with the story as normal and make it to the end. If you do everything right, you will unlock the ending and get the related trophy.

This is the most complex ending in the game and has several requirements before it can be unlocked.

First you will need to take both of the Serpent's Viscera. A snake will be in the cave at the bottom of the area where you fought the Guardian Monkey. The other will be at the Senpu Temple, to the right of the first Idol in the area and near a kite mechanism. Use the Ninjutsu Puppeteer on the small enemy nearby to have him fly the kite to a new area where you can kill the Giant Snake.

The second step is to give a scroll, found at the bottom of the pond in the Temple Area, to the Celestial Maiden. It will disappear and you will have to find it where you fought the 4 Monkeys. Talk to her and she will come back and tell you about the fruits. You will need to find the monk who is in the dark cave near the nearby temple. Find the monk and bring his gift to the Heavenly Maiden. Have her eat the fruit and you will receive Frozen Dragon Tears to use on Kuro after defeating the final boss.

When you are faced with the choice between Kuro and Owl, side with Kuro, defeat the Great Shinobi and continue the story to the end. If you've done it all, you'll unlock this ending and the trophy.

Shadow of the Colossus (PS4) | Where to find coins, shrines, lizards and fruits ❯

Tales of Arise: how to remove gear and costumes

Fortnite: how to link accounts of multiple consoles | Guide

NBA 2K22: All the answers to the music quiz in MyCareer

Add a comment from Sekiro: Shadows Die Twice, how to unlock all endings