Defeating Sekiro's bosses requires patience more than anything else. In this guide we will reveal the tricks to defeat all the bosses of Sekiro: Shadows Die Twice

Here you go third and last part of our guide (here the full before and second part) on the bosses of Sekiro: Shadows Die Twice. We continue to discover the tricks to defeat them in the simplest way possible. Let's begin!

The bosses of Sekiro are so varied and different from each other that there is no general advice to beat them all, as per tradition From Software. The important thing is to search for an area, if possible, to see how to get a sneak attack. Considering that most boss fights in Sekiro can take hours, so arm yourself with patience.

There are two methods: first is very simple, but it almost always works. All you have to do is go back to her and run around him. Will try various attack with the sword, but each time they will be too slow to reach you. When the attack is over, she will stay still, and right now you can go inside her and deliver a couple of blows. He will start deflecting and neutralizing, staying close will avoid his deadliest moves, doing so will make it easier to parry three or four combos (just deflect at a regular and fast pace). However, she does have some attacks that can be difficult to deal with. His sweep attack has a large radius, then jump when you see her stretch her sword back and jump on his head for massive postural damage. She also has a lunge attack, but if you get close to her she will rarely do so. 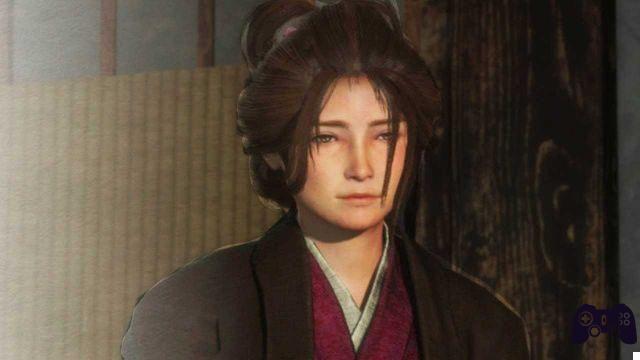 In case it does you can just divert it. A peculiarity of this boss is the grip, which is very dangerous: to perform it he will wave his hands in front of his face while charging him. Sometimes he can perform a backward pirouette and hold the sword above his head, which leads to a forward slash attack. In this case, get ready to parry, or better yet, attack her after she comes back to interrupt the move. It's another reason to be as aggressive as possible. If you walk away from her, pay attention to its flying thrust, which you can parry, using your Mikiri counter. The glint of the sword lets you know it's about to strike, so be sure to sprint to the side.

This fight is a lot similar to the battle against Genichiro. Owl uses a mix of long range and close range attacks, but also uses other tricks in combat. You can parry without any problem, but there are other things to watch out for. If he lifts his foot in the air, you'll need to back off as fast as possible. This brutal attack it cannot be parried so pay attention. Occasionally he gets on his knees before throwing an object. 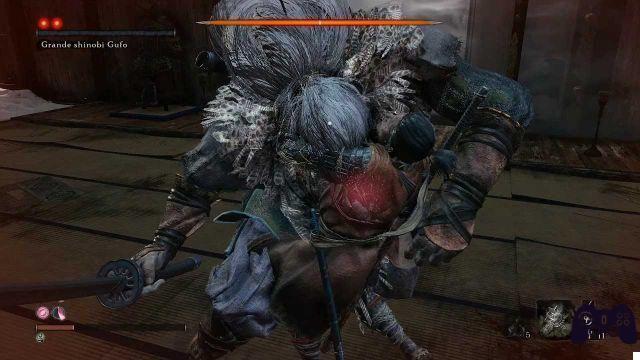 Run behind him when he does to quickly attack him, but don't let him touch you fog. The latter prevents you from using the items for 30 seconds, which makes it incredibly annoying and potentially lethal. In second stage will use to the smoke bombs but also of poisonous attacks. Whenever he grabs a bomb, just run away from the cloud away from him. You should be able to avoid the poison he sheds when the fog spreads by simply moving away from him.

Good news, this version of the Monaco it has three phases instead of one. La first stage is almost identical to the version you have already fought.
Entering the second stage one will come into play black fog. This will happen a few times at this stage and will signal the appearance of several ghost monks that are best avoided. If you use the grip points on both sides of the deck it's easy, just don't stop. The third phase reveals one of the creeping centipedes and some new attacks. 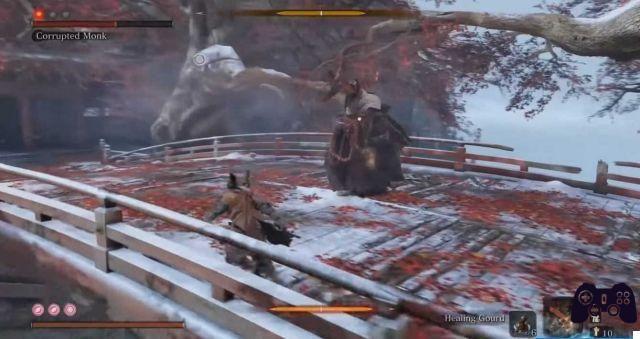 This is closer to the first stage than the second, but has a new unlockable attack. After seeing him raise his arm and a red kanji you can use on him to avoid the bug spray. This move causes terror and will likely kill you. Keep fighting the other attacks and you'll see he'll die in no time.

Before the boss there will be ahorde of little dragons to kill, then run around them and attack them. They will occasionally spit poison but it is easily avoidable. They will summon a tree that will attack you, but this is easy to spot as you will see him squirm beneath you before he attacks. Eventually brown dragons will appear, ignore them and continue the fight with the white ones, after you will think about them. When you finish with them it will be the turn of the Divine Dragon. 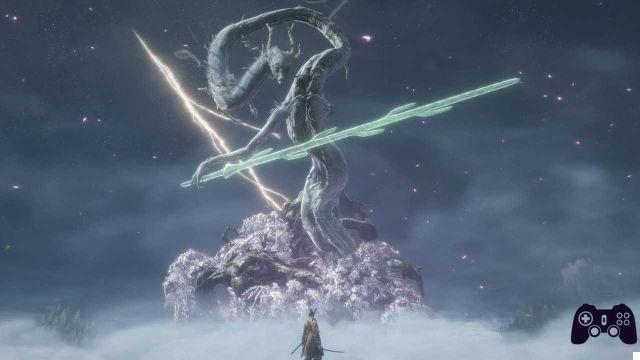 This fight seems far more intimidating than it really is. Attacks with the dragon sword can be avoided simply by running to the side of the vertical bars or jumping over the horizontal ones. To extract the garment, you want to look for the trees. Grab these and then use the lightning bolt to attack the boss. The Divine Dragon it will fall off quickly.

the demon he has a huge posture bar, so it will be harder to unbalance him. In general, you can stay close to his leg, as it allows you to turn left and avoid most attacks, as well as dealing damage. The unlockable attacks change as you take the deadly blows needed to kill him. In general, the best way to avoid them is to simply run away from the boss. Occasionally it will jump and land causing a wave of fire. 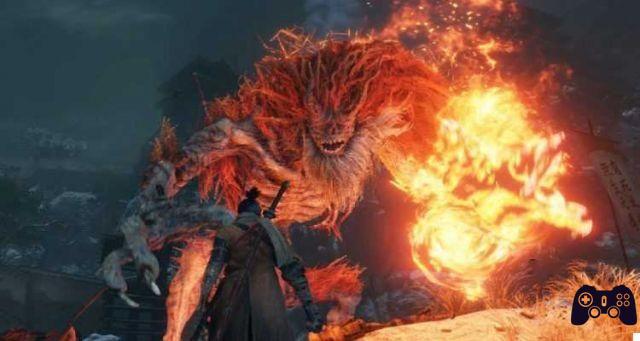 In final stage will shoot fireballs. He throws them in bursts of eight, so pay attention to them but make sure you run around in circles to avoid them. If you come back to him as he shoots the last one away, you should be able to deal a few hits. It is advised not to be very close to him at this stage, so you need to be patient. Keep an eye on his legs as he may step on you, he does signals by lifting one leg.

La first stage it's a sword fight. It is the most simple stages to deflect his attacks. The key things to keep in mind are primarily about timing. He uses special timing for his attacks, which means that if you want to parry his blows, you have to calculate the attack times. By using the Mikiri token against him you can jump on his head, so keep an eye on his movements. When he sheaths his sword, it usually means he's about to rush into you. If you run away from him you should be able to beat him easily before he recovers. 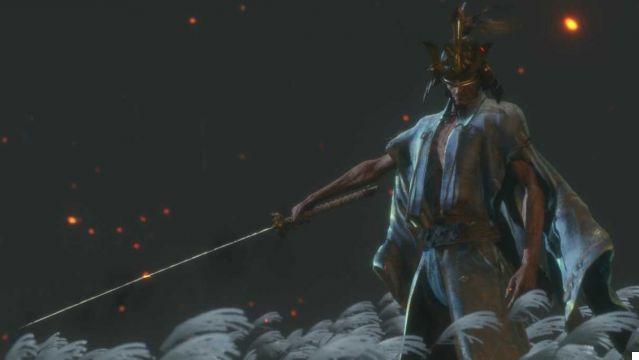 Phases two and three involve him both using a large old spear. This complicates matters if you want to parry attacks, as its attack times are even faster to understand. There's a trick that works in both stages However. If you run in a large circle around him, he will attempt a jump attack. Run under him when he does and use a running attack before escaping again.

Isshin Ashina is the final boss of Sekiro: Shadows Die Twice, and he's a tough guy to beat. You will face it in two phases and in the second he will inflict occasional fire damage causing the entire area to explode. Make sure you have some dust on hand before tackling it. This can be a long and complex fight: his posture will recover quickly until his health is less than half e in this fight there is very little chance of dealing damage. It will also avoid your first attack whenever you try to hit it. Swing once to take out a spinning token, which you must parry. 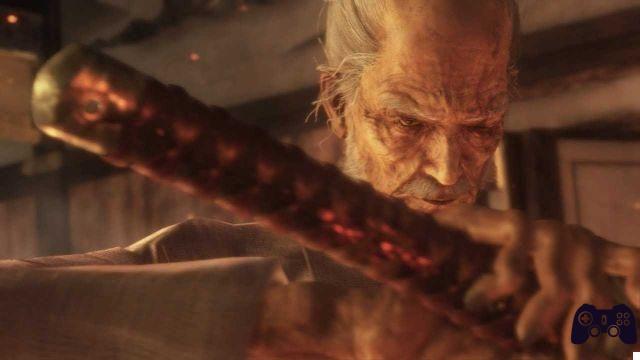 It's hard to predict what he will do next, and your main hope is just to look closely and figure out what move he is going to do carry out. Sometimes it's a simple combo, which you can deflect. Sometimes it's a hold, which you can parry by looking for a signal similar to Emma's. Other times, it will perform a push attack - respond with a side dodge and an attack of your own. Your only hope is to attack at the very end of these moves, usually with just one attack. The easiest attack to parry is his cut above, where he will raise his sword above his head with two hands.

It will attack forward once, and then again. Stay close to him and dodge to the side, then go inside him to hit him twice. When his health is low, he continues to parry and deal damage. In the second phase, he adds a new series of attacks that deal burn damage. As soon as the phase begins, it will sag and start growling. He is going to give fire to the room: rapid, use the firecracker to stun him and get some hits. If you can't, do your best to avoid the tongues of fire on the floor, which flare up once and then a second time with more vigor to cause great damage. 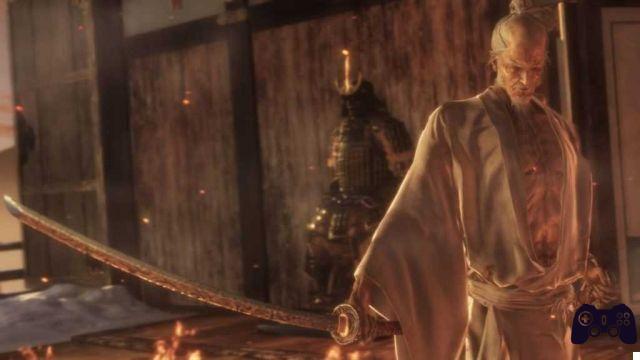 You may want to consider buying the wilted red pumpkin from the merchant in front of the Hirata Estate before the fight, which will reduce burn damage. Again, the easiest attack to parry at this stage is the two-handed overhead charge. This time, he'll push forward once and then perform a fire blast. The second attack deals damage all around him. Take a quick hit and save. The other two fire attacks are easier to read.

He will knock his feet to the ground before attacking, sometimes he will then throw a narrow cone of flames across the entire arena, the rest of the time it will stay close to him, but the cone will get wider and wider. Either way, jump back and to the side when stomping your feet. He will perform some of these moves from his first phase, so he just tries to learn them and counter them when he brings them out. It's not easy to deal with but what do you expect from the final boss of a FromSoftware game?

This Sekiro: Shadows Die Twice boss guide has come to an end. In order not to miss any news on the universe of video games but also on much more, continue to follow the pages of Holygamerz.

Do you want to be a video game expert and know all the tricks, guides and reviews for your video games ? Holygamerz.com is a group of video game fanatics who want to inform you about the best tricks, guides and tips. We offer you the best information to be a reference in gaming, so here you can find guides, tricks, secrets and tips so you can enjoy your games to the fullest. Are you ready to get all the achievements of that game that you resist so much? Enter now and enjoy your favorite video game to the fullest!
Shadow of the Tomb Raider: Tips to Get Started | Guide ❯

CTR: Nitro-Fueled, here are all the wheels to unlock in the game!

Fortnite: complete guide to the challenges of week 8 | Season 6