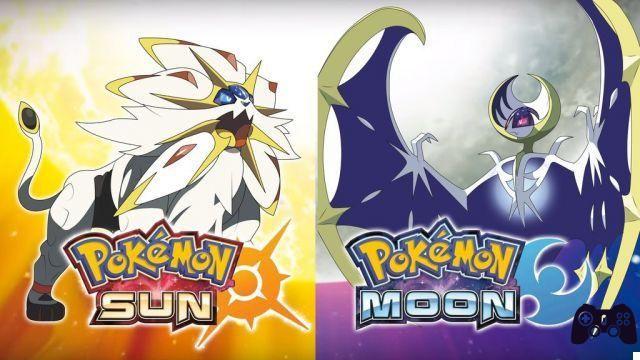 The guide to Pokemon Sun and Moon. Inside not only the guidelines regarding the whole storyline but also tips, tricks and much more. We resume our journey from the Cemetery

NB. The guide was written using the game version Pokemon Luna, there may be some inconsistencies with Pokemon Soleconcerning exclusive pokemon and more. All these cases will be reported, thus indicating the differences between the two versions.

Entering the Cemetery you can challenge 3 trainers and get 4 items. On the first graves on the left you can get a Antiparalis, on the left side of the Cemetery (behind the hedge) you will find the MT100 (Confidence), finally in the North area you can find a Big Mushroom it's a Superpotion. The coaches are the following, ordered by the aforementioned areas:

At this point you can exit the cemetery and continue towards the Path 2.

Continuing on Route 2 you will come across a house (on your right) and a Hotel. Going near the house, continue the climb and then go down a few steps (usually in Pokemon games) to find a Cura Ball.

Going straight ahead you will find yourself at the berry garden where we should defeat the Team Skull.

Once the recruit is defeated we will get one Baccarancia from the owner and not only, we could also obtain del Argenpolvere behind the owner's house and also a Big Mushroom in the lower left corner of the garden.

We then return to Route 2 where we could challenge other trainers and get other items. At the crossroads, on the left and after the fence we could find a Revitalizing. To the right of the crossroads we can find one instead Superpotion. The trainers we will find are two for the Revitalizing path and one for the Super Potion one.

Once the challenges are over we can enter the Centro Pokemon where Hau will give us 3 Revitalizing because of his crazy purchases. Also inside the Pokemon Center it will be possible to ask the girl near the Market to exchange ours Spearow in exchange for Machop (pokemon can change according to the versions).

The girl near the coffee shop will ask you to catch a Cutiefly and show him the report on the Pokedex in exchange for a prize. After healing our pokemon we can go out and go to Liam so we can start ours First Challenge (and unique on the island Mele Mele).

We are ready to start ours First Challenge of the Tour of the Islands. The challenge consists in beating the 3 pokemon that hide in as many lairs inside the cave, and then beating the dominant pokemon. Liam reminds us that it will not be possible to capture the pokemon of the cave until the end of the challenge. First, go to the nearest cave, press A to control it and beat the pokemon that will challenge you. It is one Yungoos in Pokemon Sole or a Rattata in Pokemon Luna, both al liv 11.

Approaching the second lair on the right the opposing pokemon will sling against it, beat it to continue. As for the third pokemon, this will run away from hole to hole 3 times, after which the Team Skull that will have to be beaten.

Beat Team Skull we go to the second lair and we could beat the third pokemon. Once this is done we could exit from the upper exit of the Cave to enter the Dominant Pokemon Arena. Collecting the Crystal Z on the pedestal we will attract the attention of the Pokemon Dominante (Gumshoos o Rattata liv 12) that will challenge us.

The Dominant pokemon, like other wild pokemon later, can call other pokemon to its aid thus transforming the battle from a 1vs1 to a 2vs1. Once defeated we will get the Normium Z, and also Liam will give us 10 Mega Ball to catch the cave pokemon. Once the challenge has been overcome, we could move on to the Path 3.

add a comment of Pokemon Sun and Moon: the First Test