GTA V: how to make money online and offline

Despite the GTA V age still remains relevant and active, let's find out together how to make a lot of money both online and offline

In Gran Theft Auto 5, you have the ability to do any activity you want. There is something for all tastes from sporty ones to other less conventional ones. Most of them will make you money anyway, but only a few of them do it faster. In today's guide we look together at the methods on how to make money in GTA V in both online and offline versions.

You will become the richest in San Andreas

Although many years have passed since its release, no less than 7, Gran Theft Auto 5 it still remains a very relevant game. Its communities are still very active and show no signs of extinguishing. Much of this thanks to the undisputed quality of the game and the fact that Rockstar Games keeps the title active with some weekly events. Some of them even allow you to make a good amount of money, but if you want to know how to make money offline and at any time of the year, keep reading this guide on GTA V, let's start now from its online side.

Before you start making money online, it is imperative to know how to secure your savings. This is because there are players who are just waiting to rob you as soon as some profitable activity is over. At every opportunity, then start up your phone and deposit the money you have earned. You will find the card for the bank in the section dedicated to Financial services. Alternatively, but more risky, you can use the TMJ scattered throughout the map.


Also one way to play safe is to start the Passive mode, the option can be activated by scrolling down in the Interaction menu. In this way we will not be able to be attacked by other players on foot. However, we too will not be able to attack and investments will kill us anyway. So if you are looking for a nice break, get on a roof and start the Passive Mode. Here only a helicopter can reverse you. 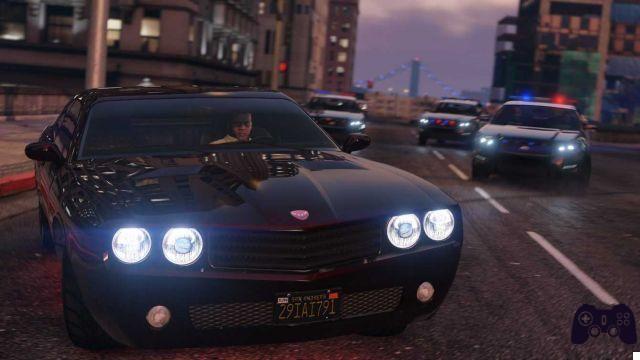 Stealing and selling cars - GTA V: how to make money online and offline

One of the simplest initial ways to make money is to sell stolen cars, luxury cars can even be sold for a while. maximum of $ 9.500. However, you have to be careful because the online police are always careful not to let stolen cars escape. If we manage not to get noticed, just bring the car to the Los Santos Customs and resell it. They will buy any untracked car for an acceptable price, but only every true 48 minutes (i.e. the length of an in-game day).

To overcome this problem it can be useful to create different characters and buy a garage where to collect luxury cars and sell them little by little. You can then play with your main character, and switch to the secondary one to sell cars every time the 48-50 minutes tick. An added benefit of switching between characters is that your game is saved with each change. 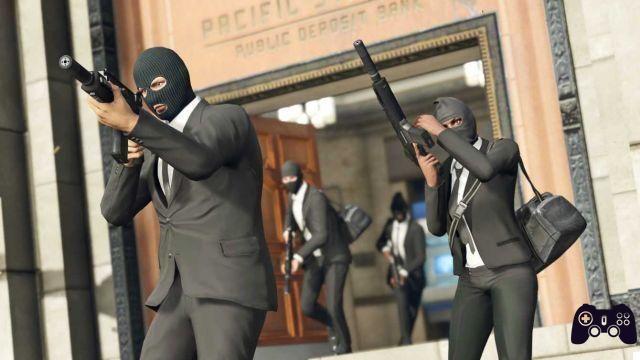 This is one of the activities that we can do both in GTA V Online and offline, fun but definitely not one of the simplest methods on how to make money as it involves the danger of being caught by the police. To start a rapina just open the map and filter the shop icons, then locate one and go to the place.

Taking out the gun in the shop will start the robbery and the shopkeeper collecting money. Screaming into the microphone or shooting at the shelves it will make it act faster. At the end of the harvest it will be enough for us to run away with the loot and sow the police. Furthermore, they can also be done in online co-op mode and take place in a similar way, with the difference that one of the players will eventually have to distribute the money to the other companions.

If you have accumulated a certain familiarity and player level, it could become another option to do multiple robberies at a time. In this way you will save a lot of time, but with the certainty that the level of suspected skyrocketing so the police will be very aggressive against you. 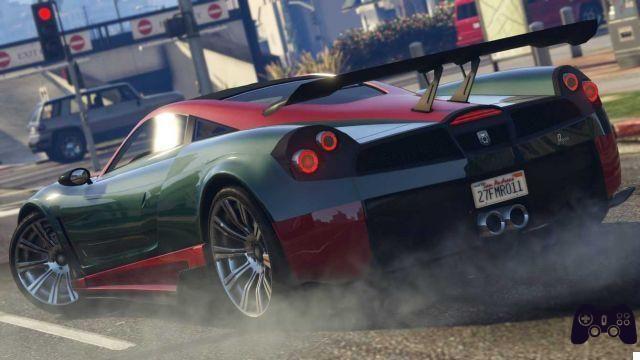 Complete Missions and Survival - GTA V: How to Make Money Online and Offline

Participating in missions is certainly the most common and traditional way of making money in the game. In fact, it includes a tiered system that allows us to make more and more money. To find them, just search on the map for the initial letter of the character with whom we want to collaborate and reach him, but the smartest system is through the card Activity - Quick Match from our phone.

From here we will have access to all those unlocked so far and we will be entered into the matchmaking system. We will also be able to sporadically receive invitations from other players, even unknown ones. Some quick missions to flip and keep an eye on are: Shot at the dock at level 6 for $ 15.000, Explosion I at level 12 for $ 18.000 e Waste operation at level 81 for $ 15.000. Once the task is completed, we can also decide to stay with the same team of players, ending up also participating in free-for-all clashes, races and other missions.

Also at level 15 we will unlock one of the most profitable activities, it is Survival in which we will have to resist together with other 4 players to 10 waves of enemies without dying. After successful business, you can earn a whopping $ 30.000. To stay alive as much as possible it is advisable to work in coordination with the rest of the team and look for locations where you have more control of the map. For example in the aircraft graveyard, it is advisable to position yourself on the roof, gaining a considerable advantage. 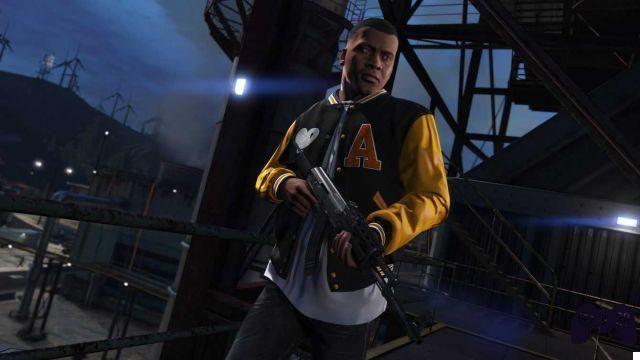 Finally, we have come to the offline part of the game where the methods on how to make more money also need a capitalist streak. First of all it is necessary to have put together some money, easily accumulated by traditionally playing the main and secondary missions (leaving out those of Lester, you will understand later), robbing or stealing money from passers-by. However, to maximize your earnings, we recommend that you finish the game before attempting these two methods. Then hold on tight because there is a lot of money to be made here.

First of all it is better save the game, because if things go wrong at least you will not have lost your savings. Once this is done you will have to buy as many shares as you can of the FlyUS on BAWSAQ with all three protagonists of the game (just to maximize your earnings) by logging into the Financial Services area of ​​your phone. Then equip yourself with every destructive weapon you own: grenades, C4, rocket launchers, grenade launchers or even a tank.

Then enter the airport and destroy all the planes except those of the FlyUS. After about 10 minutes on weekdays you will see the latter company's stock soar. Now all he has to do is log in to the again Financial services and sell everything. The gain will be directly proportional to the money previously invested. 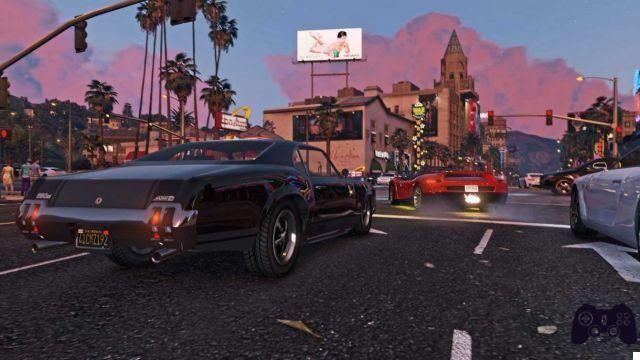 To take advantage of this method, it is strictly necessary not to have completed Lester's assassination missions. It is in fact thanks to these missions and the targeted investment of huge amounts of money with which we will be able to earn millions of dollars very easily. After you have saved the game, go ahead with this system which includes all five missions: 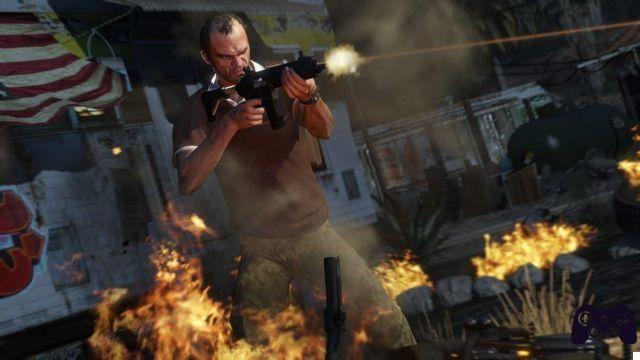 You are now ready to dominate Los Santos

With the guide we have provided you know how to make money in GTA V both online and offline. In case you have any doubts or want clarification about this crazy game created by Rockstar Games, ask us your questions below in the comments.

Grand Theft Auto 5 is available on PC, Xbox One, PlayStation 4, PS3 and Xbox 360. I also invite you to continue following us on Holygamerz to stay updated on the world of video games and technology.

Audio Video GTA V: how to make money online and offline
GTA V: here is the list of all the tricks available on PC ❯

add a comment of GTA V: how to make money online and offline