Who I am
Pau Monfort
@paumonfort
Available for

Although television programs such as the legendary have now disappeared from the radar Takeshi's Castle (known to the less young as Mai Dire Banzai and commented by Gialappa's Band) and Wipeout have remained in the hearts of many fans, who still today remember the hilarious falls and situations bordering on the surreal that captured the audience episode after episode. To take a cue from this television format is Fall Guys: Ultimate Knockout, the latest effort by Mediatonic which bases its gameplay on the desire to re-propose the shows in question in a videogame sauce and which, according to the success in recent days, seems to have done it fairly well.

The operation of a Fall Guys game is really simple: you start with a match from 60 players in which about 70% of the participants qualify and this continues, challenge after challenge, up to a final mini-game that sees only a handful of competitors clash. 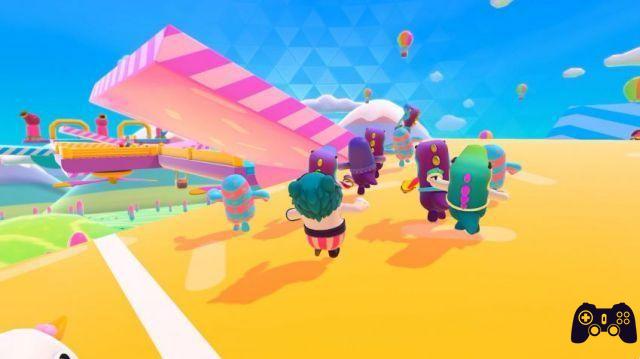 Described in this way, FallGuys might almost seem like a generic and anonymous sports title, but we assure you that it is not: imagine if competing for the first place are some huge pot-bellied beans (the same developers have confirmed that each "falling guy" is more or less 180 centimeters tall) with incredibly clumsy movements, able to jerk off emitting strange noises and dive to avoid ruinous falls at the last second, deliberately exaggerated thanks to the particular game physics.

Add to this crackling mix also very clean, colorful, simple but at the same time functional graphics and the result is a sort of battle royale in which you fight each other with jumps and shoves. 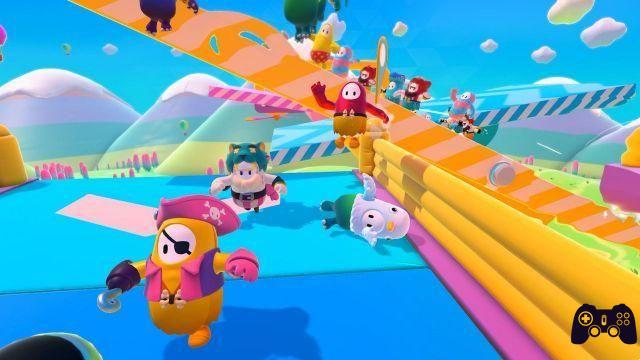 We find the background to the races a myriad of arenas all characterized by the presence of bright colors, easily legible and with elements reminiscent of those of a children's playground. After all, the level design team members also include a former theme park attraction designer, who took advantage of her work experience to give Fall Guys internships exceptional attention to detail.

The simple gameplay of Fall Guys, which revolves all around themselves three keys, combines perfectly with all 24 mini-games available at launch, divided into different categories: we find those available only for the final stages, those in teams, those of survival and the classic obstacle courses that always manage to claim victims and give life in chaotic and hilarious situations. 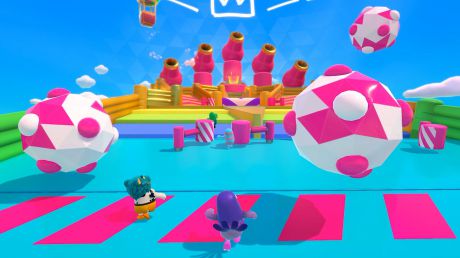 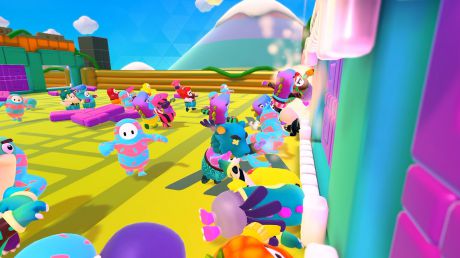 In principle, each of the proposed challenges manages to entertain, but we certainly cannot be completely satisfied with theirs balancing, since it is soon realized that the number of disqualified users is very high for some games (Slime Climb above all) and too low for others (see Block Party and Perfect Match). To underline this imbalance is the different overall duration of the games which is based on the selection of the challenges carried out randomly by the system: the rounds in which you compete in the simpler mini-games have in fact little relevance due to the small number of players eliminated and dilated uselessly the duration of a competition to win a Crown.

The real Achilles heel of the Mediatonic title are though team games: Unless you're playing in a group with your friends and can coordinate with them, many of these mini-games are likely to become frustrating and luck-based, since it's not that rare to find yourself in matches whose teams they have a different number of players. We fully understand that the luck factor should be placed in such a context to really allow everyone to have their moment of glory, but we would have preferred the possibility of deciding whether or not to include team competitions between the qualifying matches. 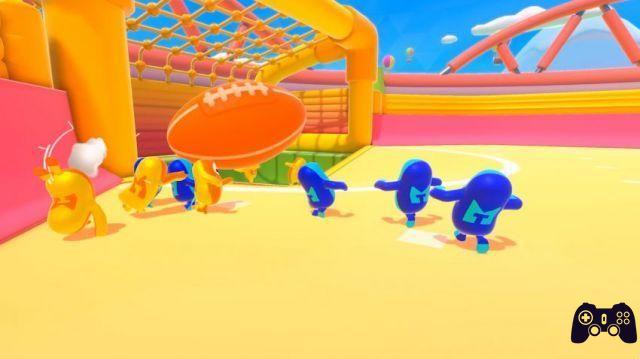 Let's be clear, this speech does not involve all mini-games of this type and in many of these you can have fun without problems since even the ability of the individual can turn the tide of the game, but in other cases chaos reigns and all that you can do is wait for the timer to reach zero hoping not to be the next eliminated.

The nice protagonists don't necessarily have to run around the paths as mom made them and it is possible to customize them with a large amount of colors, patterns and costumes that can be unlocked either by climbing the 40 levels of the season pass for free or by spending the currencies accumulated by playing: Kudos and the Crowns. The former can be obtained in more or less important quantities based on the positioning in the game, the latter are instead precious tokens that are assigned to each victory.

Filling up your virtual Kudos wallet is child's play (whoever wants to can also buy them in the store) and by spending them you can collect the less rare items in the shop. Paradoxically, therefore, the most precious skins such as the one inspired by Hotline Miami's Jacket are relegated to the Crowns and can be shown only and exclusively by players with a certain number of victories behind them. 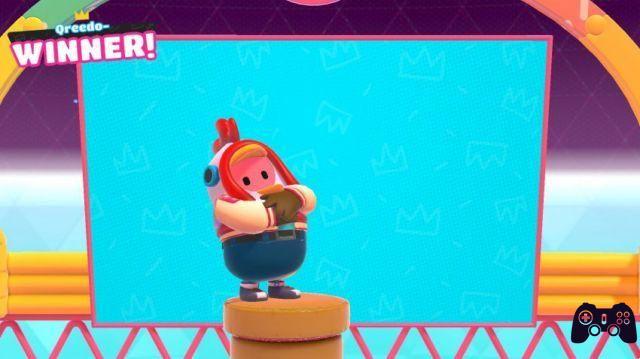 While ideally perfect, this system may not prove to be all that effective in the future, especially when we consider that at the moment there is no need to resort to microtransactions, if the only two bundles are not taken into consideration, each comprising three exclusive skins and not available for purchase in the store.

Such a strategy, in the long term, could in fact prevent the development team from collecting enough to support the product with new seasons and the content necessary to keep it alive. among other things already confirmed. The way the game is structured, in fact, it is understood that the next Season Passes will also be free or can be purchased through Kudos (unless a third currency is introduced exclusively linked to microtransactions), thus leaving the most patient players the possibility to buy any future content type.


Consequences of an unexpected success

In this first week since the release, the game servers have been offline more time than online but we feel it is unfair to blame the developers for these problems. In fact, we remind you that Mediatonic is a small team and that, more importantly, although he was sure of his project, he didn't have the faintest idea that it could reach an audience so large as to jump to the top of the sales charts ( Fall Guys even surpassed GTA V on Steam). 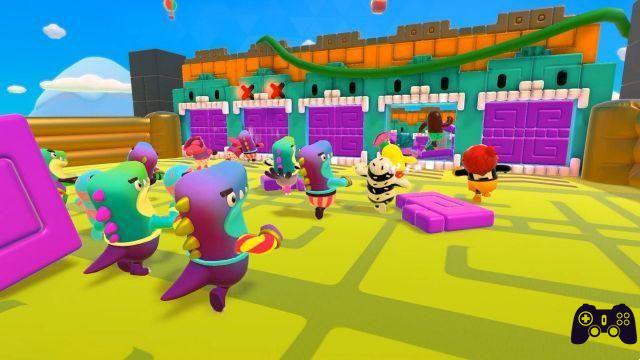 Net of the connection problems encountered in the last few days, the game does not suffer from major problems From a technical point of view and to confirm this are the numerous Closed Beta weekends in which we took part both on PS4 and on PC in the weeks preceding the release, all without problems even remotely similar to what has been happening in the last few hours.

Trophies It's not often that budget-priced titles on PlayStation Store also include a Platinum Trophy, and Fall Guys is one of those exceptions. Being able to collect all the Trophies would be an undertaking within everyone's reach if it were not for one and only goal that will prevent many from obtaining the coveted Platinum: Infallible. This very difficult Gold Trophy requires you to win five games in a row and you must therefore have a lot of luck as well as lightning fast reflexes to be able to unlock it. In fact, in the course of our numerous matches, we have never managed to overcome the three consecutive victories.

This does not mean that the game is perfect, on the contrary, and the hopes are that the team will be able to resolve once and for all as soon as possible. the problem of server overcrowding to focus on the integration of new features, on the resolution of known problems (above all the management of the camera near walls and obstacles) and on the development of new content. Among the most serious shortcomings of a game of this type we cannot fail to mention the page relating to statistics and rankings, since to date there is no way to know relevant data such as the number of wins or more stupid information such as the amount of players jostled and the time spent "in flight". 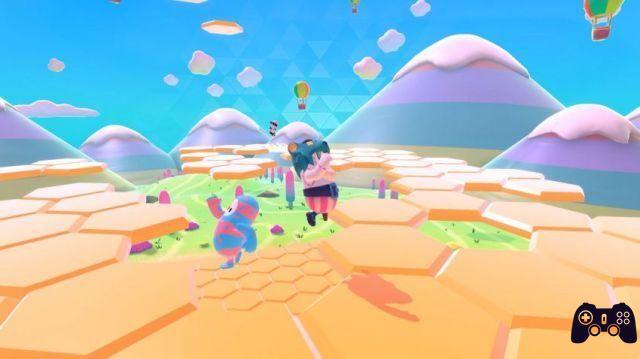 Another feature that could give the game more power on Twitch is an integration with the platform, so that streamers can play with their viewers with a simple click, a bit like what happened in the Hyper Scape Open Beta. There is therefore enough work to be done to refine the product and make it more complete, but we are confident that Mediatonic will be able to fill these gaps in the coming weeks.

Nothing to complain for what concerns the technical sector, whose simplicity has allowed the development team to create a fluid and pleasant product to see both on PlayStation 4 and on PC, where it manages to run very well even on machines with not exceptional performance.

Fall Guys, a 'Big Announcement' coming soon: here is the date of the new event ❯

add a comment of Fall Guys Ultimate Knockout Review: Champions of the Crown