Death Stranding, the new title signed Hideo Kojima that has rocked the contemporary gaming world, is undoubtedly stuffed with quotes from the world of entertainment. From video games to literature, the world of Death Stranding lives and thrives also thanks to a vast undergrowth that is anything but veiled. Obviously, in a game where the cinematographic component gets to hybridize with the videogame medium to the point of becoming a single entity, strong references to the world of the seventh art could not be missing. Let's go and see together what the cinematic quotes in Death Stranding that we were able to locate.

One of the most obvious quotes in the world of cinema is not contained in a single scene, but in an entire character. In fact, the nickname of the director of BRIDGES, Die-Hardman, is clearly a reference to the famous action saga Die Hard starring Bruce Willis. The vein was born in 1988 with Crystal trap (Die Hard in original), directed by John Mctiernan. The film was a great success that led to the creation of four sequels. It is not only a cult of the action genre, but it is also an important pivot of the theoretical line at the basis of postclassicism. Basically, the postclassical thinking it contrasts with the modern and, subsequently, postmodern one and is committed to studying that Hollywood cinema which, although with evident differences, remains closely linked to its principles and rules. Kojima certainly did not hide the quote from this film saga. In a crucial dialogue the director is even described by Deadman as a "hard man to die".


I love the smell of napalm in the morning

Another quote hidden in the sunlight is certainly the one concerning Francis Ford Coppola's masterpiece Apocalypse Now. The scene in question had already appeared in one of the game's presentation trailers, so this quote has been buzzing in our heads for some time. We are talking about the moment when Clifford Unger / Mads Mikkelsen it comes out of the tar exactly as it does Martin sheen in one of the most iconic scenes in the history of cinema, even if in that case it was stagnant water. Without a doubt the fact that both scenes are set in Vietnam it is an incentive that strengthens the idea of ​​the quote. Even the way in which Unger scrutinizes the surrounding environment is reminiscent of the emergence of the capitano Willard.

Another "alarm bell" is the light that cuts the face of the same character in his appearance on the battlefield of the Second World War. From the movements to the lighting, the scene is reminiscent of the splendid shots with Marlon Brando in the shoes of Colonel Kurtz, "antagonist" of Coppola's film.

A little more difficult to identify and, above all, less credible as a quote, is that a Terminator. During the first meeting with Cliff Unger, in fact, we see the latter emerge from the tar pulled by his soldiers. After regaining his strength, Unger stands up in much the same way as he does Schwarzenegger during his "icy" interpretation of the T-800 at the moment of his arrival in the present. We can't say for sure it's a deliberate quote, but the way it was presented and the fact that it's a substantial war machine made us immediately think of the famous cyborg.

The cinema of the Eighties was certainly crucial for the artistic formation of Kojima. It is no mystery that his previous video games also incorporate many elements from the popular culture of those years. After Die Hard, Apocalypse Now e Terminator It's time for another staple of Hollywood action cinema: Aliens - Final Showdown. Second chapter of the famous saga born from the mind of Ridley Scott, was released in theaters in 1986, this time directed by a young man James Cameron (which, by the way, he will also direct Terminator 2 - Judgment day). More than a visual element, this time the quote is verbal. In fact, during a conversation with Sam, Deadman will exclaim "Game over, man!", which is the most famous phrase of Cameron's film, recited by the recently deceased Bill paxton. Just so that we don't miss anything, Kojima has inserted another quote in the same scene, this one much more familiar to those who hang out in the gaming world. Indeed, on the holographic screen behind the character played by Guillermo del Toro the word "Game Over" appears, which many will recognize as the one that appears more than once during game sessions with the various Metal Gear.

The fascination of silent cinema

Not just modern blockbusters, but the cinema of the origins finds its place in the dystopian world of Death Stranding. We can, in fact, find a quote (also in full view) a Charlie Chaplin and its Charlot's appointment when Heartman takes a copy of the film from his library. The film, whose direction is uncertain (some say it is by Chaplin, others attribute it to Joseph Maddern), was released in 1914 and lasts about twenty minutes (hence the original title Twenty Minutes of Love). This explicit insertion of a film that is more than a hundred years old, among other things compared to a personality like that of Heartman (not only played by one of the most important contemporary directors, Nicolas Winding Refn, but also a character extremely linked to the past), indicates Kojima's desire to exalt what was there. Look to the past and learn from it.

The posters and the soundtracks

To close this "hunt for quotes"present in Death Stranding we find posters and soundtracks that can be unlocked through the memory chip scattered around the game map.

Christine - The infernal machine di John Carpenter: Cult dated 1983, the film is based on the novel of the same name by Stephen King. Also in this film, Carpenter uses his peculiar way of making cinema to criticize the American society of the eighties, increasingly clinging to capitalist dynamics.

Godzilla di Ishir Honda: With this 1954 film, the iconic kaijū makes his debut in the world of cinema.

The Walk di Robert Zemeckis: The 2015 film, based on real events, tells of the amazing feat implemented by Philippe Petit in 1974, namely the crossing of the chasm between the Twin Towers with only a cable underfoot. Kojima seems to have wanted to include the film in the game because, apparently, it would illustrate well the basic dynamics of Death Stranding, that is the "thread" that unites everything and the long journey that Sam must make to prevent it from breaking.

Stand by Me - Remembrance of a summer di Rob reiner: Another cult of cinematography, this time taken from the story The body featured in Stephen King's collection Different seasons, the film is a 1986 coming-of-age story. Again, Kojima draws a parallel with Death Stranding. In both the film and the video game, death is a major theme. The only way to deal with it, either way, is to deal with it. In the game the man is forced to dispose of the corpses to prevent them from going into necrosis, while in the film the idea of ​​death seems to be such a big taboo that the group of young boys feel forced to venture out in search of the rumored corpse. in such a way as to understand what this "inevitable evil" actually is.

Big Fish - Stories of an incredible life di Tim Burton: Without a doubt one of the director's best (if not the best) work, dated 2003. As written in the description in the game, the film is all about lies that become, over time, stories (and vice versa). Once the protagonist has grown up, he understands that the stories his father told him when he was little are nothing but falsehoods invented to save him, as long as possible, from the cold reality of life. With the unfolding of events, however, the boundary between reality and fiction seems to intertwine and blur, until the viewer is no longer able to distinguish one from the other.

Vampire Slayer di Tom Holland: A 1985 vampire-themed horror comedy that has been very successful among fans of the genre.

Matango the monster di Ishir Honda: Science fiction film dated 1963. According to Kojima, the mushrooms in the film are the ancestors of cryptobionti by Death Stranding.

The seven samurai di Akira Kurosawa: One of the most important and influential films in the history of cinema. Many were inspired by the Kurosawa classic. Over all John sturges for its The magnificent seven (declared remake of the film), but references can also be found in much more unthinkable productions. It is an example of this A Bug's Life, signed animation masterpiece Pixar, where there are clear references to the 1954 film.

The bridge over the River Kwai di David Lean: 1957 film based on the novel of the same name by Pierre Boulle, best known for its best seller Il pianeta delle scimmie, then also readapted for cinemas.

Doctor Strangelove - Or: how I learned not to worry and to love the bomb di Stanley Kubrick: Could not miss in a video game like Death Stranding, so politically militant, at least a reference to one of the pillars of Kubrick's anti-militarist cinema. The film, dated 1964, is the second anti-war film made by the director, released precisely in the climate of Cold War, just two years after the Cuban missile crisis of October 1962. Kubrick openly criticizes the lack of collaboration between the great world powers, which, for him, will inevitably lead to an irreversible chain reaction that can no longer be stopped, even if the parties involved decide to join forces to prevent the damage they unleashed from having catastrophic consequences. There are several similarities with the world of Death Stranding, such as the theme of collaboration and union to try to prevent the inevitable. Not only. Even war as something wrong. A "nightmare" with open eyes that remains firm in the memory of those who have experienced those conflicts firsthand and who continue to live and thrive in their testimonies.

Among the soundtracks we find those of three films by Nicolas Winding Refn: Bronson (2009 film starring Tom Hardy), Valhalla Rising - Kingdom of blood (2010 film starring an interpreter we know very well, that is Mads Mikkelsen) e The Wicked Die Young (which is not an actual soundtrack, but a compilation of songs that the director listened to while making The Neon Demon).
But it doesn't stop there. Refn is still present, but this time in a film soundtrack that sees him in front of the lens: My Life Directed By Nicola Winding Refn, documentary shot by the director's wife, Liv Corfixen, during the processing of He only gave forgiveness.
Kojima also pays homage to our national cinema by inserting both the soundtrack of Deep red of the great Dario Argento, both a compilation of excerpts from the horror master's films Lucio fulci.
Finally, there is also a tribute to contemporary Scandinavian cinema, with the soundtrack of Thelma, paranormal thriller directed by Joachim Trier.
We would like to clarify that soundtracks cannot be played.

These are the cinematic quotes that we managed to unearth in Death Stranding. There are certainly many more of them than we have found. For this, let us know in the comments if you have identified other references that have escaped us, so as to contribute to the construction of what could be (and already is) a grande puzzle transmediale. 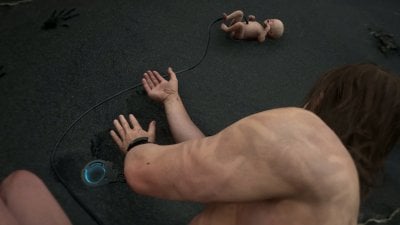 add a comment of Death Stranding: guide to movie quotes