CTR Back N. Time: what to know about the Grand Prix event!

The month of August welcomed the new CTR Back N. Time event. Here's everything you need to know about this new Grand Prix event!

This summer saw the return of Crash Bandicoot evaluation with CTR: Nitro-Fueled, a karting game that has already proved to be a huge success. In fact, the title in question has already exceeded half a million digital copies sold, a goal achieved not only thanks to the emotional value of the public towards the brand but also from the excellent quality of this racing game (you can read here the our review).

The development team Beenox it is therefore riding the wave of success through the realization of events Grand Prix limited time, during which you have to overcome challenges to accumulate points that can unlock exclusive rewards. Back N. Time is underway from 2 to 25 August, the second enriching event CTR of a new track set in prehistoric times along with completely new drivers, vehicles and cosmetics. No more chatting and let's start seeing all the contents of this event. 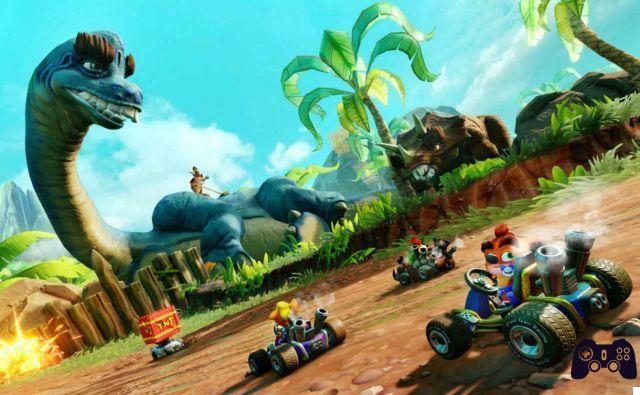 CTR: Back N. Time makes us run into Prehistory

The first important news of the CTR Back N. Time event is certainly the track "Prehistoric Park", which takes us back in time in a scenario surrounded by forests, caves and dinosaurs. From the first lap it is possible to notice the effort of the developers in wanting to guarantee a great freedom of approach to the track. For example, we will be able to move in multiple directions to take more shortcuts during the race, or we will be able to take advantage of numerous interactions with the game environment. In fact, it will be possible to increase the speed by interacting with ramps, geysers and even dinosaur tails!


All these elements allow us to reach maximum speed from the very first stages of the track. From a visual point of view, the track maintains the high standards of CTR, being populated by a large amount of elements on the screen that give color and dynamism without penalizing in any way the fluidity of the game. It therefore follows that "Prehistoric Park" it is certainly a more complex and courageous track than the "Twilight Tour", which is the first real track created by Beenox for this game. 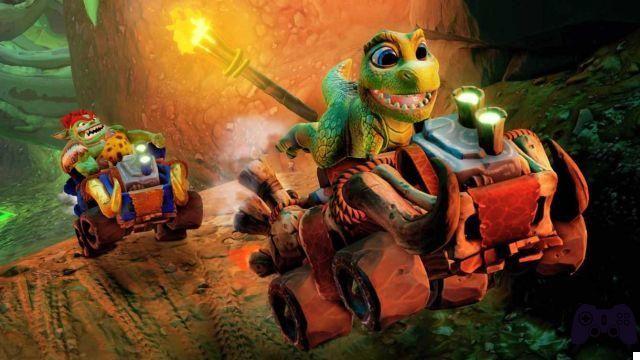 The new event of CTR Back N. Time bewitched us by the tenderness with the addition of three little riders: Baby Crash, Baby Coco and Baby T. The first two are new characters, while the cute dinosaur comes from Crash Bandicoot: Warped, in which we could just ride it to be able to advance in the levels set in the prehistoric era. The three pilots have completely different statistics, and consequently a different difficulty: Baby Crash è Beginner, Baby Coco è Intermediate e Baby T è Advanced.

It must be said that the first two characters are unlockable using Wumpa Coin in Pit Stop, while the third can only be obtained with Nitro points filling the first of the three bars. If the characterization of Baby T satisfied us, the same cannot be said for the anonymous and unattractive Baby versions of Crash and Coco, compared to the Baby versions of Cortex and N. Trophy present in Crash Bandicoot: Warped.

Another novelty of the event of CTR Back N. Time is the addition of three vehicles. The Probulot 2000 it will float in area just like the Oxide's spacecraft, and will only be unlockable via the Pit Stop with Wumpa Coin. The two remaining vehicles can be obtained by filling in the Nitro Bar, and are customizable thanks also to decals, wheels, colors and stickers introduced specifically with the new event. The event Back N. Time finally brings with it beautiful skins, which will allow us, for example, to impersonate Crash and Ripper Roo as a mad scientist or Zem and Pura in a prehistoric version!

In the past few weeks we had shown in detail the complex system that determines the number of Wumpa Coins acquired, influenced by numerous factors including playing time and day of the week. In fact, in the first minutes of the game and at the weekend we can take advantage of multipliers that will allow us to earn more points than usual. Despite some minor improvements, the system still limits the player to having to go through short game sessions in order to unlock the rewards of the Pit Stop. A similar situation was the perfect excuse to introduce the micro-transactions, which will give us the opportunity to buy certain amounts of with real money Wumpa Coin.

We hope that a similar functionality will not block the improvements that CTR still requires. We would appreciate a greater rotation of unlockable content in the Pit Stop and above all a resolution of the problems related to Online matches, which still require better stability and a balance linked to the weapons that can be used in the race. 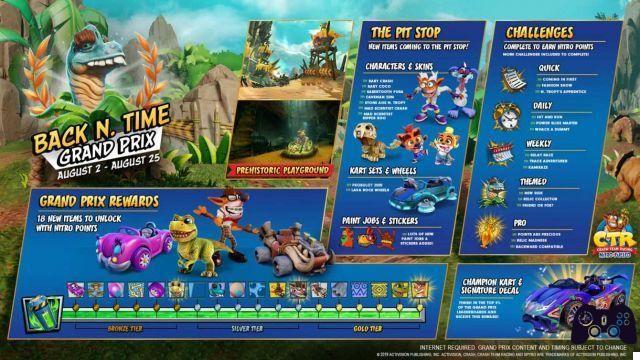 In conclusion, the event of CTR Back N. Time adds for free a large amount of content, among which the new track certainly stands out "Prehistoric Park". This event convinced us fully by giving us further confidence in the support of CTR: Nitro-Fueled by Beenox. We remind you that you can find at following address all our dedicated guides to this game!

CTR Back N. Time: here are the new daily and weekly challenges ❯

Days Gone: how to save

Add a comment from CTR Back N. Time: what to know about the Grand Prix event!