Ark: Survival Evolved is a layered work, with many game elements to learn: let's discover today how it is possible to tame most creatures

On the pages of Holygamerz we have been talking about Ark: Survival Evolved for some time. We have proposed our review, a series of anecdotes about our experience with the game through our LIFEinGAMES column and we are here now to introduce the first specific guide.

Today we will talk about how to tame (so-called taming) Ark's creatures.

NB All articles on Ark, unless otherwise specified, refer to The Island map.

To begin with, you need to specify that they exist two different types of domestication modes. There is the aggressive mode and the passive one. Each Ark creature requires one of two methods: it is therefore not possible to choose how to tame (tame) our target. We will have to use the method decided by the game: the only known exception is the Diplodocus (Diplodocus) which accepts both the aggressive and the passive method.

In general, taming revolves around the creature's favorite food. We will have to feed it enough times to make it friendly and make it our ally: a tamed creature will follow us, fight with us, can be used to obtain and transport resources and, in some cases, can be ridden, after manufacturing. the correct saddle.

The main types of food

The main method of domestication is the aggressive one. Let's see the various steps.

Stopping the Creature: All a matter of Torpor

Our goal is to make the creature "Unconscious". To do this we will have to increase the "Numbness". There are several ways to do this:

These are the first methods of increasing enemy torpor available in the early stages of the game. 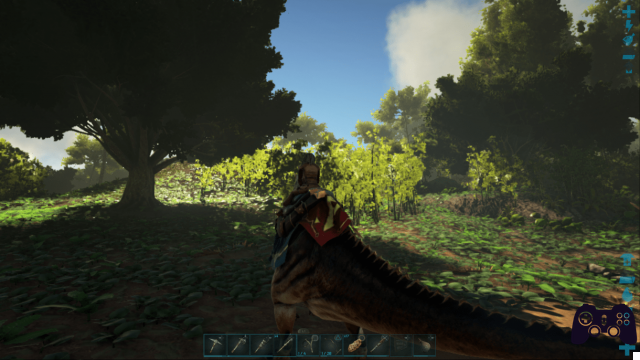 As soon as the creature is on the ground, we will be able to approach and interact with it. We will have to open its menu (Y on Xbox One, Triangle on PS4) e put the best food in your inventory. The creature will automatically eat when hungry enough and taming increases. We must be careful not to run out of food, as in this case the taming bar would quickly drop to zero, forcing us to start over.

Another very important bar is that of Numbness: in fact, the creature will not remain on the ground forever. The numbness will drop steadily, at different rates depending on the specimen we are trying to tame. If the numbness dropped to zero, the creature would awaken by fleeing or attacking depending on its temperament. To keep the numbness high, it is necessary to force the animal to eat Narcoberry or Narcotic. The former can be harvested from shrubs, while the Narcotic is to be created in a Mortar and pestle by combining Narcobacche and Rotten Meat. The Narcotic is much more powerful, of course. To force the creature to eat one of the two resources, we will have to put it in its inventory and then use the action command on the object (RT / R2).

By the time the taming bar is at 100%, the creature will be tamed and will start following us. We can give it a name and set its behavior.

The effectiveness of taming

The last bar we will have to keep an eye on is thetaming effectiveness. This bar has a percentage value that will drop as the dinosaur is tamed. As mentioned earlier, the better the food put into the creature, the higher the initial taming effectiveness will be. But what do these numbers indicate?

Quite simply, depending on the effectiveness value, the creature will gain extra levels once it is tamed. The formula to calculate this value is: creature's current level * (tame effectiveness / 2).

Let's repeat it, the taming effectiveness tends to decrease so it will be difficult to keep the percentage value at its maximum. 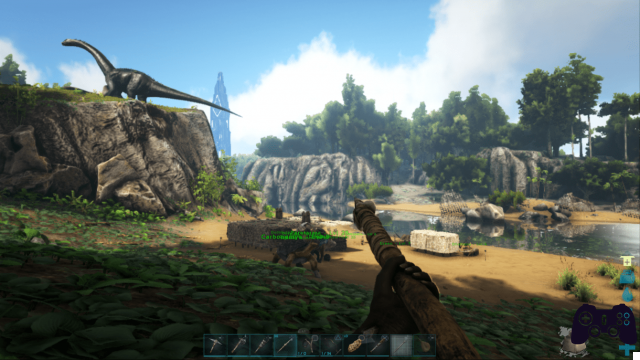 There are, however, a whole series of creatures that cannot be tamed in the way just described. The passive method requires you to place the correct food in the last slot on the right of the quick inventory then approach the creature and press the interaction key (Y on Xbox One, Triangle on PS4) when the interaction prompt appears above them. After that we will have to wait until the creature is hungry again and we will have to feed it in the same way. By repeating the process enough times, we will be able to tame the creature.

The main problem is that all creatures (with the exception of the Moscope and the Listrosaurus) will either be frightened by our proximity or will attack us on sight. The best solution is to wear a full Camouflage set so as to be able to approach us undisturbed. The Camouflage set unlocks at level 33 and requires Organic Polymer which can be obtained from two different creatures: the Kairuku which is found only in the northwest of the map The Island and theEsperornis which is common in the southern regions. They are both types of birds. To get as much Organic Polymer as possible you will need to use the wooden club.

Also wearing a Camouflage set however, it is very important not to touch the creature: otherwise it will attack us or flee (depending on the temperament). If you are attacked, you can escape and have the creature calm down and then return to tame it. Remember that a creature that is fighting or feeding on a carcass will not accept your food, so try to clear the area of ​​all distractions if possible.

A few last notes on the world of Ark

We have explained to you all the techniques for taming Ark's creatures in the early stages. Obviously in practice everything is more and more complicated, but with experience you will be able to tame increasingly large and dangerous creatures. The main problem, especially if you play on the online PVP servers, lies in the time required to tame a creature. It will be necessary to have good supplies of Narcobacs and Narcotics, as well as be ready to defend the creature (and ourselves) from all the dangers of the island.

Assassin's Creed Odyssey: how to lay the corpses ❯