In Assassin's Creed Odyssey it will happen that you have to get rid of the eliminated enemies: but how do you do it? Read our guide to find out how to download your victims!

Being an Assassin is not for everyone. Acting in the shadows to serve the light means moving in silence and attracting as little attention as possible: in short, stealth. The Assassin's Creed series is not lacking in action and adrenaline, but knowing how to move stealthily is certainly a quality that will be very useful in your missions. Obviously, not always everything goes smoothly, and it happens to have to reap some victims ...

Victim who must be made to disappear. The Ubisoft Assassin saga has always made the most disparate players available hiding places to hide your victims, but sometimes it happens that there is just not time to look for the perfect place and, rather than stay in plain sight, it is better to leave the area of ​​the crime quickly. But being left with a corpse in your arms isn't exactly the best of situations. So let's find out how to lay the corpses in the shortest possible time in Assassin's Creed Odyssey. 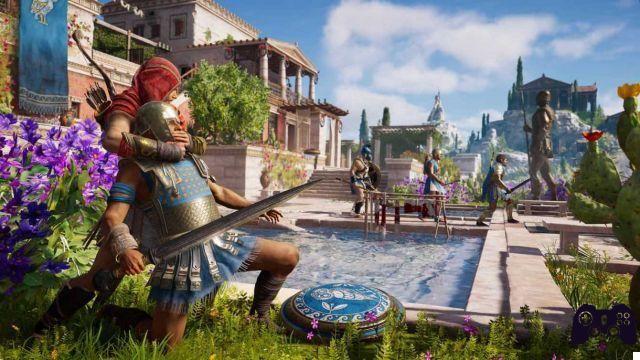 So how do you get rid of the corpses in Assassin's Creed Odyssey? As in the mini-guide on the day-night change, here too we find ourselves with a very simple action to do but which is not explained well enough. When you kill a human enemy and want to dump their corpse into a bush or some other hiding place, the game prompts you how to collect the body (triangle button on PlayStation 4, Y button on Xbox One) but then ... it doesn't say how to get rid of it.

An alternative way to let go of a body is to perform a primary action such as attacking or dodging, but the body will tend to fall back in disarray. If you want to let go of a corpse in the most efficient and "clean" way, once picked up with the triangle or Y button you can lay it down simply pressing R2 (on PlayStation 4) or RT (on Xbox One) once you reach the desired place.


That's it, very simple, macabre, fast. Tell us if this guide was useful to you, and write us in the comments if you want other suggestions or need specific guides! We leave you reminding you that Assassin's Creed Odyssey is the latest, brand new episode in the Ubisoft Assassin saga, and is out on October 5th for PlayStation 4 and Xbox One!

Fortnite: the Challenges of Week 7 of Season 7

Add a comment from Assassin's Creed Odyssey: how to lay the corpses