Apex Legends: how to enter the secret bunker

Do you want to know how you can access the secret bunker of Apex Legends? Find out in this new guide, you will have a guaranteed legendary loot

As you know the Season 5 of Apex Legends brought several changes to Respawn Entertainment's battle royale. In fact, there are numerous changes to weapons and legends, but not only. Even the map Canyon of the Kings transforms into something completely new. Skulltown and Thunderdome have been destroyed and players are still uncovering all the secrets in the new map. Among these there is a mysterious one secret bunker, which contains a special treasure inside. Let's find out in this guide how you can enter the bunker in the fastest way possible. 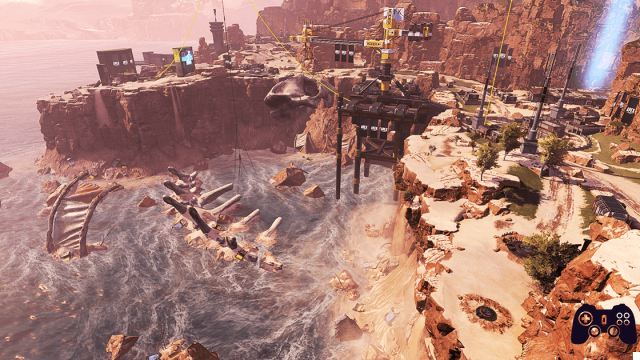 The bunker is located near the Broken Coast. Normally to enter it is necessary to open a hatch to go down inside the shelter. However, one player found out a secret way to enter the launch phase directly at the start of the game. In fact, under the coast there is an entrance, just be precise during the descent to take advantage of it. The difficulty is all in the descent maneuver, in fact once you enter it you just need to follow a simple path to get to the legendary treasure.

Once you enter the crack, just take it the corridor on your right, cross the corridor and go through the door. At this point you will have arrived and your reward will be waiting for you. It is one golden knockdown shield, which will not only provide you with a great defense, but also the ability to revive yourself once in the game. We leave you below the clip posted on reddit by user Damon388 showing you the secret entrance.


Just found there is a way to get to a locked bunker. There is also always a legendary revive shield there. from apexlegends

Beware of the dangers!

True, the method does not present many difficulties and it will be easy for you once you have learned the position of the passage. But pay attention to a couple of things and take precautions. In fact if you use Octane be careful to use his shot, as you risk falling and perishing prematurely. Also you will have to be careful of other players.

An insured legendary shield is tempting to many. The area has become quite popular and it is not difficult to imagine the presence of many people in the bunker. If you want the shield you will have to take risks, it is up to you to decide if it is worth it. Surely early game equipment like this is a great help which will facilitate you in the race to victory. Are you ready to take the risk? Let us know and keep following us on the pages of Holygamerz, to stay up to date on all the news from the world of video games and more!

Destiny 2: items on sale by Xur from March 29

Add a comment from Apex Legends: how to enter the secret bunker