Mario Party Superstars: what to know before starting to play

What do you need to know before starting Mario Party Superstars? We tell you about it in this special on the party exploits of the Mushroom Kingdom

There are years in which Nintendo "wins" E3, and the Direct of June 2021 saw the Big N share the gold medal with Microsoft: one of the merits of the Kyoto giant was Mario Party superstarsbut if you are unfamiliar with the series is the best time to summarize what you need to know before playing. To better appreciate what the title intends to put on the game table, in fact, it is good to understand what ups and downs have permeated the previous chapters of the saga. On the other hand, what better time to look back in view of such a celebratory episode?

The first thing you'll want to know, just in case, is what Mario Party is, before we get into Superstars specifically. In practice, up to four players roll dice to move around a board, not unlike snakes and ladders. At the end of each round, players are separated into teams (free-for-all, two-against-two or three-against-one) to compete in various minigames. It's not the WarioWare delusion, but it comes close. The winner of each minigame earns coins to spend to earn Stars or to get items around the board.

The player with the most Stars (who can be stolen from each other; the tools allow this and more, giving space to the strategy) after a certain number of turns vince the match. However, this is not an entirely new chapter, actually. The basic idea, similar to The Top 100 on Nintendo 3DS, is to bring back minigames from past chapters. There are five of the franchise's most beloved early-era scoreboards (Nintendo 64), along with a hundred of the most beloved minigames. At the end of each round the game is saved, avoiding the usual "steel bladder" scenarios in single player.

What's new - What to know about Mario Party Superstars

Although Mario Party Superstars consists of a collection of boards and minigames you've seen in the past, you'll want to know what's new. The series, as we have already mentioned, was born on Nintendo 64. After the development team, Hudson (Bomberman), was absorbed by Konami, the saga changed management passing into the hands of Nd Cube (Wii Play). Among the various innovations that the latter has brought, we have native online support. To meet this, the communication of impromptu reactions will take place through convenient stamps to be used even during the shifts of others.

In addition toself-rescue, with which we will be able to interrupt our games, we will have a new coat of paint with which the classic minigames and their scoreboards will jump out much more to the eye. Peach's confectionery scenario already promises to be very appetizing. Furthermore, we will know in advance how much separates us from the next Star: a very useful addition in view of the various crossroads of the case. Finally we will have new characters to play with: many of them already know them, but some like Rosalinda were not yet born at the time. For the latter, the doors of some boards will open for the first time!

The characters - What to know about Mario Party Superstars

So let's talk about it, since we brought up the cast. Based on the characters already seen in the promotional material (screenshots and videos), we have been able to draw up a preliminary list. There is a reason, however, if we talk about something temporary. As happened in Super Mario Party, even in the case of Superstars it is plausible that part of the roster is unlockable. For the moment, we can already focus on the usual suspects: Mario, Luigi, Peach, Yoshi, Donkey Kong, Wario, Waluigi, Rosalinda and Birdo. We will briefly describe them in a quick list, so that you can get to know them. 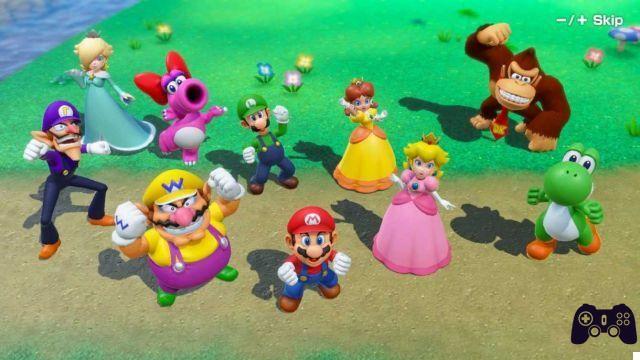 The scoreboards - What to know about Mario Party Superstars

We will be dealing with five scoreboards from the Nintendo 64 era (aka the first three). We will also list their English names, so as not to cause confusion for those who have played the classic episodes. It's a matter of Space Station (Space Land, MP2), Peach birthday cake (Peach’s Birthday Cake, MP1), Wooded Forest (Woody Woods, MP3), Tropical island of Yoshi (Yoshi’s Tropical Island, MP1) e Land of Terror (Horror Land, MP2). Each of them provides not only different advantages, but also challenges that players will have to face by adapting their strategies.

As much as chance wants its part (it's Mario Party, on the other hand), playing without planning is (almost) useless. The Space Station board, for one thing, has a countdown timer in the center. Whenever zero is reached, Bowser's mechanism is activated: the resulting beam will steal the coins from any player who is hit. About Bowser, you may have noticed that we have not listed it among the playable characters. Unlike recent episodes such as Super Mario Party, in the classic ones the king of the Koopas took on the role of a member of the boards themselves. We don't know if it will be unlockable in any way.

List of minigames - What to know about Mario Party Superstars

We won't go too far in this case, as this isn't exactly the shortest list possible. We have a list of the minigames that you will find in this title, and unlike what we have done with the boards we will list them only with their original name in English. Of course, at the almost imminent release of the game we will find them with official names in our language.

A Mountain of Minigames - What to Know About Mario Party Superstars

Playing other exponents of the party game genre, such as Crash Bash (direct competitor of the first three chapters), may have made you hungry. You will want to know if there is any way of just play the minigames and that's it. Well, although it has already been possible to replay the minigames unlocked in previous episodes of the saga, you will be happy to know that there is a mode that responds to this specific desire. And, as you may have guessed, the one we used above is not just a powerful title: you will be dealing with a literal mountain of minigames.

Originally known as Mt. Minigames, this mode is accessible directly from the main menu and will allow you to compete with other characters. It will be up to you to decide if the latter are led by the CPU, by other friends locally or, why not, by other online players. There are no scoreboards whatsoever here: the only focus is and remains only the minigames themselves. To be able to give yourself crazy joy, you will have seven different paths to change things a bit. We talked a lot about the variety inside the software, but will we have freedom of choice also at the hardware level?

Where, when and how you want - What to know about Mario Party Superstars

One very intriguing thing to know about Mario Party Superstars is how much the development team learned from a mistake made in Super. The title is in fact designed in such a way that it can be played in company not only on Nintendo Switch, but also on the model Nintendo Switch Lite. For the uninitiated, the emphasis on using single Joy-Con made Super Mario Party initially impossible to play on Nintendo Switch Lite, but in this case we are dealing with a very inclusive game. And speaking of inclusion, we also have an alternative control system.

Defining a traditional controller as "alternative" says a lot about how times have changed, but this time there will be no discrimination. Contrary, again, to what was seen in Super Mario Party, this time the Pro Controller will be welcome. In this way, anyone can play in the method they see fit, regardless of their choice of controlling the characters using the Pro Controller, Joy-Con or keeping the console in portable mode. And this is not even the only turnaround compared to its predecessor: there is also a turning point on another front. 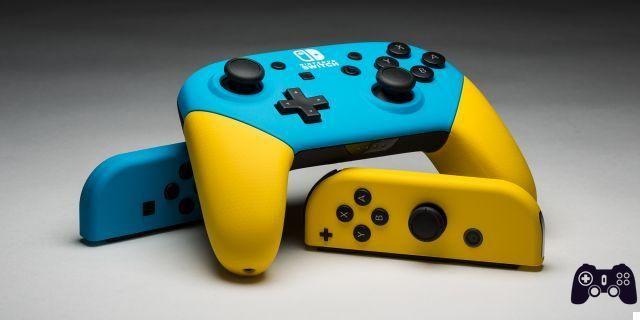 In addition to local co-op, as you should already know Mario Party Superstars also supports online, which could not be said about the previous chapter at launch. You will therefore have the opportunity to face other people on the boards (and not), for a potentially truly infinite party. However, you will have to take into account the fact that you pay for online, especially now that a deluxe version of the subscription is about to arrive. This “add-on package” of Nintendo Switch Online will add Nintendo 64 and Sega Mega Drive games to the offering, as well as DLCs for other games starting with Animal Crossing: New Horizons.

The party will arrive on our Nintendo Switches in exactly eight days, that is Friday October 29. The ideal, in short, to spend in company (and in joy) any party you have planned for Halloween! Now it's up to you to tell us yours: what do you think of the game? Let us know below, and as always don't forget to stay on Holygamerz for all the most important news for gamers and more. For your purely gaming needs, you can instead find the best discounts in digital format on Instant Gaming.

Do you want to be a video game expert and know all the tricks, guides and reviews for your video games ? Holygamerz.com is a group of video game fanatics who want to inform you about the best tricks, guides and tips. We offer you the best information to be a reference in gaming, so here you can find guides, tricks, secrets and tips so you can enjoy your games to the fullest. Are you ready to get all the achievements of that game that you resist so much? Enter now and enjoy your favorite video game to the fullest!
Marvel's Avengers: what we expect from the next-gen version PS5 and Xbox Series X | S ❯

Nioh 2: all the guides to the main bosses of the game

Add a comment from Mario Party Superstars: what to know before starting to play