Legends of Runeterra: guide to the best champions of Demacia

In Legends of Runeterra, champions are at the heart of any self-respecting deck. For this reason, we are here today with the best Demacian champions to annihilate your opponents

You have already chosen your favorite sample of Runeterra? Still not sure which deck to bet to join the fray? No fear. If you are still undecided on what to do, we are here to help you with the first guide in our column dedicated to the champions of the game. Keep in mind that due to the multiplicity of champions in the game, there is no single strategy for building a winning deck.

The study of the papers and the experimentation of feeling and synergies between the game mechanics are fundamental in building a winning deck. Our intent, therefore, is to show you the champions of the different regions of the game and their potential to help you choose the right cards without wasting too much time.

In Legends of Runeterra are present well 24 samples to choose from, divided by region of belonging. Since the choice on the roster is vast and could be confusing for those not yet in the game, we're here to show you some of the heroes that Runeterra revolves around. The samples of the first region that we are going to analyze are those of Demacia.

Demacia it is a powerful kingdom dedicated to respecting the law and its inhabitants, and with a prestigious military tradition. Its people worship ideals of justice, honor and duty and are very proud of their cultural heritage. Despite these noble principles, in the centuries following the war, Demacia became more and more isolationist. The capital, the Great City of Demacia, was founded as a refuge after the nightmare of Runes War and built on the power of petricite, a particular white stone that reduces magical energy.


The champions defending Demacia are many within League of Legends, but only a few of them have been transposed into Runeterra: Garen, Fiora, Lux and Lucian. So, without going too far, let's go and discover the best Demacian champions! 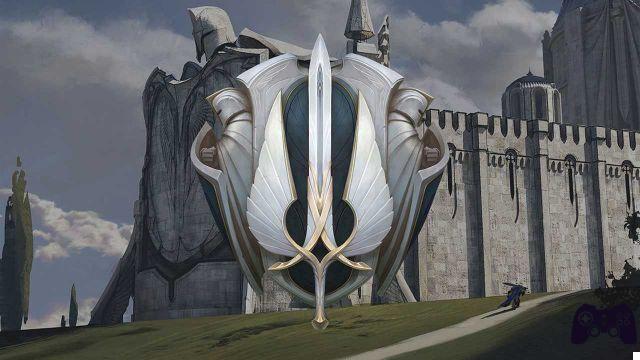 Garen, the power of Demacia - Legends of Runeterra: guide to the best champions of Demacia

Thread is a warrior at the head of the Demacian vanguard. Skilled and noble warrior, Garen is the scion of the prestigious god family Crownguard, a family named for centuries to protect the crown and its ideals. In Legends of Runeterra, Garen shows great deck feeling paired with Tryndamere, Lux, and sometimes Fiora or Shen. The Demacian deck generally points to a early game with cheap but strong cards in attack, to show off Garen in the mid game and take advantage of the skill "Regeneration" to last multiple shifts, e "Prepare the Assault" to attack twice in one turn once you level up.

Fiora, the magnificent duelist - Legends of Runeterra: guide to the best champions of Demacia

Fiora is the strongest and most feared duelist of Value. As smart and quick as it is skilled with the rapier, it is part of the lineage of Laurent. After a scandal that involved the family and the father, Fiora wrested control of the family from the latter to restore order and restore prestige to the name of her lineage to bring it back among the largest in Demacia. The deck with Fiora inside, aims to protect her in the attack phase in order to take advantage of her ability without too much risk, thanks to which by killing four enemies without dying, the game is automatically won. Fiora runs well in decks with cards featuring "Challenger" and spells aimed at his protection, and paired with champions like Shen or Zed.

Lux, the lady of luminosity - Legends of Runeterra: guide to the best champions of Demacia

Luxanna Crownguard, that Luxury, she is the younger sister of Garen. Since magical abilities in Demacia are viewed with suspicion, Lux has grown in fear and has been forced to keep her power a secret to keep the reputation of her prestigious family high. Despite this, Lux has managed to master her abilities over time and is now using them in secret at the service of his homeland.

Lux is not an easy champion to use in Runeterra, because of her strong synergy with some papers but poor traffic with others. In general, he doesn't have a champion to work with, but he depends a lot on decks full of spells. It generally shows a good feeling paired with Ezreal, although they are quite difficult to handle and take some time to get into the mechanics. Final Spark, in combo with Ezreal's Mystical Strike e Energy barrier, can be a great finisher to destroy the enemy Nexus and win the game, as well as make Lux evolve quickly.

Lucian he is a sentinel of the light, or a hunter of dark and immortal spirits that he annihilates with his twin guns. After that Thresh killed and captured Senna, his wife and hunting companion, Lucian embarked on the path of vengeance, but even with the return to life of his beloved, his fury has not diminished.

Lucian, in perfect keeping with his story, works in very strong synergy with Senna (Blue card, rare) and vice versa. If Senna dies, Lucian levels up; on the contrary, if Senna sees Lucian dying she is granted + 1 / + 1 and "Quick Attack". Lucian and Senna work well in decks rapid and strong in the early game, possibly with cards equipped with "Challenger" and spells that increase statistics.

Excellent synergy with Katarina, Zed or with the Shadow Isles deck in general. Once you have leveled up, taking advantage of the weaker units (perhaps equipped with Challenger or Ephemeral), prepares the assault to quickly kill enemy units and finish the game in a few rounds. This card is at its best in combo with Katarina, preparing the assault several times in a single turn as long as you can "kill" and summon Katarina again to take advantage of her mechanic.

Well summoners, we have come to the end of this little guide on Demacian champions. We hope we have been helpful in getting you an idea on how to structure your deck or at least in figuring out if the Demacian champions are right for you. In the next furuto they will follow similar guides on the other regions of Legends of Runeterra and their relative champions to make you clearer on how to set up your game.

For this reason, we invite you to stay tuned to Holygamerz and in the meantime we wish you good luck with your successful climb. Bye!

Legends of Runeterra: guide to the best champions of Freljord ❯

add a comment from Legends of Runeterra: guide to the best champions of Demacia