Legends of Runeterra: guide to the best champions of Freljord

We're back with Part XNUMX of the Legends of Runeterra Champion Guide, today featuring the best Freljord champions to freeze and destroy your defenseless opponents

Today we focus on the perennial ice region of the League of Legends world: Freljord. After our guide on the best samples of Demacia, we're back to help you with the second guide in our column. As in the first guide, we would like to remind you that the study of the cards and the experimentation of feeling and synergies between the game mechanics are fundamental in the construction of a winning deck. Our intent, therefore, is to show you the champions of the different regions of the game and their potential to help you choose the right cards without wasting too much time.

As mentioned and reiterated, we are ready to venture into the frozen lands of Freljord and its relative champions. Unlike the champions around which the Demacia deck revolves (available here), the Freljord cards are suitable for a less aggro, more daunting style of play. "Control" of the game and generally based on the late game.

Freljord is definitely a land hostile and ruthless. Its people are made up of warriors, proud and indomitable, with a strong propensity for plunder and pillage. Since there are so many individual tribes in the Freljord, a civil war is underway, which will determine everyone's future. One tribe honors traditions that have always been the reason for its survival, another follows the dream of a promised agreement, the third reveres the power of an enigmatic ice witch.

The champions that belong to Freljord are many within League of Legends, but in Runeterra we find only a few of them: Ashe, Braum, Tryndamere e Anivia. So, without going too far, let's go and discover the best champions of this region! 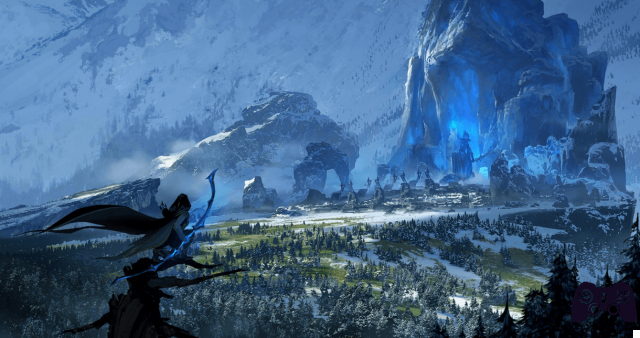 Ashe, the ice archer - Legends of Runeterra: guide to the best champions of Freljord

Ashe is the warrior mother, daughter of frost, of the tribe of Avarosani. Stoic, intelligent and planner, yet restless in her leadership role, she harnesses the arcane magic of her bloodline to wield an arc of True Ice, leading the most populous horde in the north. Believed to be the reincarnation of the mythological Avarosa from his people, Ashe hopes to reunite the Freljord by recapturing the ancient tribal lands. In Runeterra Ashe is always tricky to face, due to her ability. In fact, once played, at each round in which he attacks, it will freeze the strongest enemy deployed by the opponent. Evolving once 5 enemy units are frozen, the aforementioned will not be able to not even block the shots in attack.

Deployed in a deck where it plays a central role, with cards in the service of the "Freezing", Ashe shows excellent synergy with Braum o Anivia, as well as numerous freezing spells. Also, in combos with cards such as "Archer of Valgelata" or "Wolf of the Snowy Fang", Ashe turns out to be really insidious to counter especially in the late game.

Braum, the heart of Freljord - Legends of Runeterra: guide to the best champions of Freljord

Braum is undoubtedly the hero most loved by Freljord. Boasting huge biceps and an even bigger heart, at every inn north of Frostheld toast to his legendary strength. According to the accounts, Braum has cut down an entire forest of oaks in one night and crumbled a mountain with one fist. With an enchanted door as a shield to protect his allies, Braum roams the icy north with gods flawless mustache and a smile as big as his muscles. A real buddy.

In Runeterra, Braum is one of the most champions full, both in the statistics and in the style of gameplay that you want to adopt. Equipped with both "Challenger" that of "Regeneration", this champion proves particularly treacherous to deal with decks that include early game units or sacrifices (such as cards from the Shadow Isles). By evolving once he takes 10 damage, Braum reveals himself excellent in defense, a good control card once evolved and a valuable resource in the event that we find ourselves at a disadvantage during the late game. It shows great synergy with decks Poro and Yeti and with samples like Ashe, Zed or Elise. The latter, due to the cards in his deck in combo with those of Braum, can prove to be a good alternative to build a balanced game between early and late game.

Tryndamere, the barbarian king - Legends of Runeterra: guide to the best champions of Freljord

Unstoppable and driven by an uncommon fury, Tryndamere once made his way into the Freljord by openly challenging the greatest warriors of the north. The ferocious barbarian has long sought revenge for his clan, although he recently formed an alliance with Ashe, the warrior mother and her people. His superhuman strength and courage are legendary, and they have led him and his allies to countless victories against overwhelming forces.

Tryndamere is a particular champion to choose, but by no means weak. Because of his high price of mana and his stats, Tryndamere is a decidedly late game champion who proves decisive both as a game finisher and in the defensive phase. With "Overwhelm", in fact, Tryndamere can inflict extensive damage indirectly to the Nexus, while still eliminating enemy units. Also great bonus is his ability, which allows him to level up instead of dying, becoming even stronger and giving him the bonus of "Fearsome".

Tryndamere, as already mentioned, gives its best in late game control decks. In strong synergy with champions such as Anivia, and spells like "Call of the Warrior Mother" (which allows us to have more than one deployed at the same time), Tryndamere cannot be missing in a good self-respecting strategic deck. You won't always be able to summon it due to its cost or before turn 8, but if you manage to deploy it, victory may be easier than you think.

Anivia, the cryophenic - Legends of Runeterra: guide to the best champions of Freljord

Anivia is one winged spirit that supports the eternal cycle of life, death and rebirth to protect the Freljord. It's a Semida born of the coldest ice and cutting winds, wielding its elemental power of ice against threats. Anivia guides and protects the tribes of the cold north, where she is seen as a symbol of hope and a bringer of great change. She struggles with every fiber of her essence, knowing that with her sacrifice she will be remembered and that she will be reborn in a new tomorrow.

Anivia, despite being an expensive champion in terms of mana and not always easy to use, can prove to be aexcellent resource in desperate situations. Showing a very strong synergy with Tryndamere and generally in a control deck, his ability thanks to which deals damage to all opponents, can turn the tide of a match that has already been decided. Also, thanks to his "Last breath", once dead Anivia returns to the battlefield in egg form to level up or resurrect once she has 10 mana crystals.

Anivia's point is that, despite being a late game card due to its cost, it definitely shows up destructive if deployed ahead of time. To do this, a deck that includes cards such as "Stones of Fate" or "Amethyst of the Aeons", that is, they grant bonus mana gems to their user. If the strategy is successful, Anivia proves to be particularly difficult to deal with without cards with "Challenger" or direct damage spells.

Well summoners, we have come to the end of this second guide on best champions of Runeterra dedicated to Freljord. We hope we have been helpful once again in giving you an idea of ​​how to structure your control deck with the champions of the icelands. Please keep experimenting with the cards that you think can show strong synergies with the champions we showed you today, and stay tuned with us on Holygamerz for the next guides on the remaining regions of Runeterra. Bye and good luck!

Legends of Runeterra: guide to the best champions of Ionia ❯

add a comment from Legends of Runeterra: guide to the best champions of Freljord