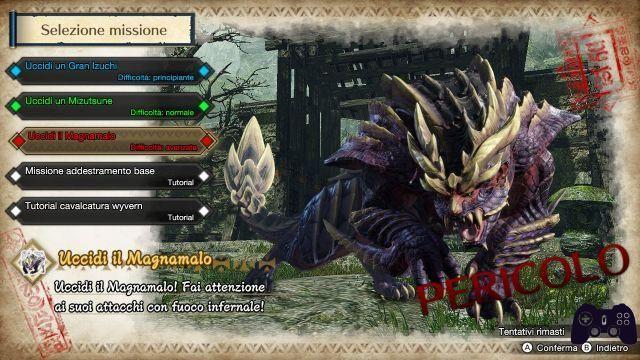 With the demo version of Monster hunter rise hunters will be able to face the cover monster, the Magnamalo, in a special high difficulty mission. As in other demos of the past few years, Capcom has opted to show one much more difficult version of his fight compared to what can be addressed in the final title. In doing so, it created quite a few headaches for all those who simply wanted to get a little taste of what Rise can offer.

This is why I decided to create this guide to help you a little in the enterprise with some advice, even if you will have to roll up your sleeves to take down the violent fanged Wyvern.

Before starting, I remind you that you can read our tried and true of all the missions made available with the first demo, to give you an idea of ​​what you will encounter if you want to skip this new, very dangerous confrontation.

Before starting with the actual guide, I would like to point out the start of a new contest by the guys on the Facebook page Monster Hunter: The Hunter's Tavern with which you can win Monster Hunter Rise's exclusive Steelbook.

To try to be drawn among the winners, you will have to post to their Facebook page image o a clip that represents some particular moment of your hunt. You can then choose textbook plays as embarrassing failures, the choice will be completely yours. 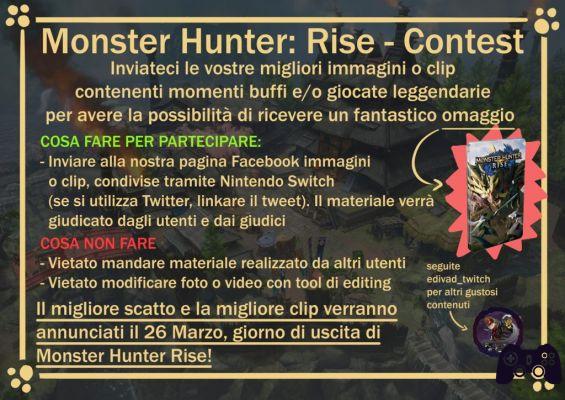 The only limitations will be that you will have to send them using the Nintendo Switch sharing function, which must be entirely your own material and that subsequent editing or modifications of any kind are not allowed.

Breaking any of these rules will win you over automatic disqualification from the contest, so be careful to follow them with caution.

For more information, take a look at the Facebook post of the contest. Now, however, let's go back to Magnamalo.

What makes the Magnamalo so strong?

First of all some basic information: why is the Magnamalo so complex in the demo, even by the standards of an experienced hunter?

As those who have already played previous series titles will have noticed right away, a limiting factor during all the clashes is the absence of a real choice of equipment. Also you will only have access to predefined sets, completely eliminating from the equation the possibility of using optimal skills and weapons and thus facilitating the battle. 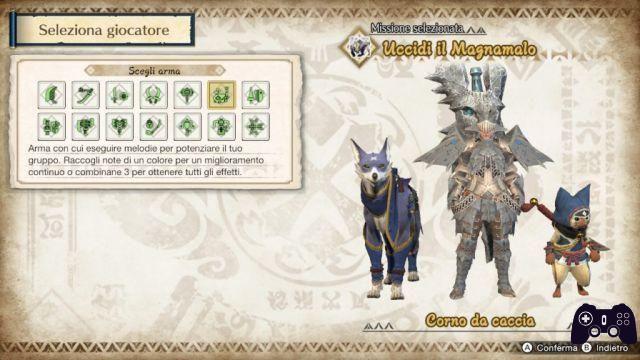 It is not possible not even make use of the meal function, completely excluding the exploitation of defensive and offensive bonuses that would have been very useful in battle (especially the latter).

If that's not enough, the maximum hunting time has been drastically reduced to 15 minutes, making the fight in effect one extremely risky race against time. Among other things, his attacks will take away at least more than half life, while in the worst case they will instantly KO.


How to defeat the Magnamalo and complete the mission

Of course, I can't assure you that by following the tips I will list below you will be 100% able to break it down the first time, but it will certainly make your life a little easier.

The main mechanic used by the Magnamalo during the fight is Evil, a state in which he will cover various parts of the body with purple flames, allowing him to use completely new moves or enhance those used normally. 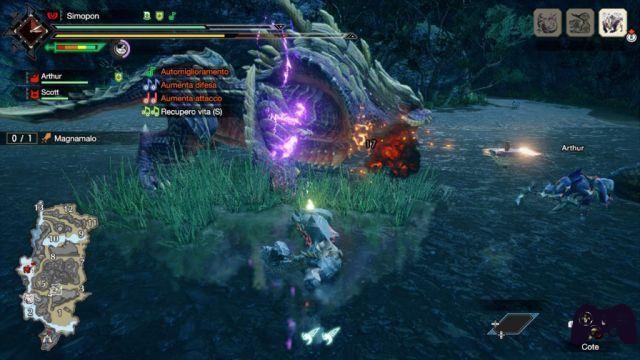 At first it will only envelope some part of the body in fire at a time, but as the battle continues it may come to be enveloped in its entirety. It goes without saying that doing so will become extremely dangerous for anyone facing it.

In a very similar style to World's Nergigante, this upgrade it can be interrupted by repeatedly striking the parts that possess it. When the power begins to manifest, feel free to attack the affected parts of the Magnamalo to greatly limit their offensive power. This way you will also have one guaranteed drop to the ground and, consequently, a great opening to inflict even more damage on him.

If that's not enough to convince you to hit those specific parts, keep in mind that Evil will make them even weaker when it afflicts them, thereby increasing the damage inflicted on them accordingly.


Use the Hellfire Malus to your advantage

Another powerful offensive assist that the Magnamalo will use in battle is the unique status Hellfire malus, which he can inflict with some attacks, such as the purple fireballs that he will throw from the tail.

This status behaves in a manner extremely similar to the Explosion, typical of monsters such as Brachydios, being able to cure it by rolling or using a deodorant. There is a substantial difference though: making a filoscatto or certain silkworm moves you will drop an explosive will-o'-the-wisp to the ground which will injure the monster.

The damage dealt is 50 and it is enough to land the monster without fail the very first time you use this nice little trick. 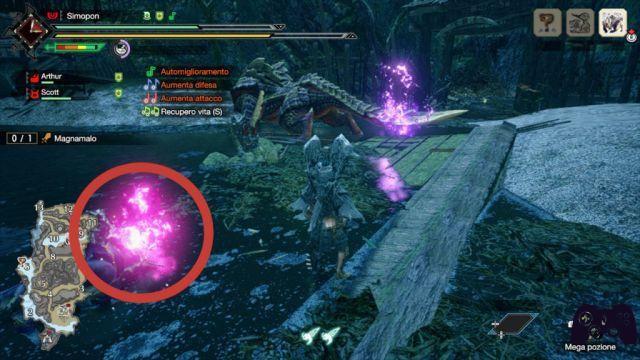 So if after an attack you see a purple flame above your life bar, take a good look at its movements and dodge with the wire bug at the right time. You could not only defend yourself from potentially deadly damage, but get the right opportunity to inflict valuable damage on it.

In the map where the mission will take place there will be two other large monsters that will wander around the various areas, namely a Rathian and a Mizutsune.

At first they will be in completely different places from your target, but as the battle progresses you will surely end up moving and, in some cases, running into them. Often and willingly ending up involving them and often making them suffer enough damage for make them vulnerable to a Wyvern Mount.

When this happens, take advantage of the opportunity immediately and have them collide with the Magnamalo, also unloading the rideable Punisher on him when the bar is completely filled. This will not only allow you to inflict heavy damage on the monster, but also to knock it down for some time, as well as being able to inflict water, fire or poison malus with specific attacks.

A technique that some community speedrunners have also used to take advantage of the Wyvern Mount right away is to immediately head towards the Rathian and hit it with different silkworm moves. 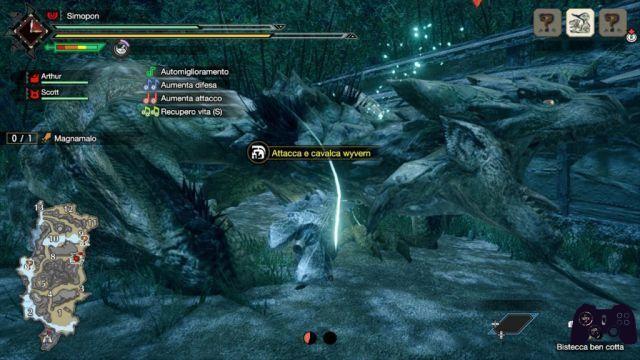 Relatively few will be enough to "tire" her out, so ride her right away and head to your target to start the battle with heavy strikes and takedowns.

Of course, the Magnamalo can also be made vulnerable to the Wyvern Mount. If that happens, have him crash into nearby walls to deal a good amount of damage, knock him down and anchor him to the ground for a short time.

Use the endemic fauna and items!

A great novelty of Rise is the endemic fauna that can be collected in the map and can be used at any time as a normal object. In this you will be able to fully exploit the surrounding environment to obtain interesting effects.

The map of this mission is no exception, some of them found on the way will be very useful to gain important openings and damage.

The main ones that I advise you to keep an eye on are the Farfafiamma, the Scaraneve, the Scaratuono and the Scoppiorospo, easily found on the way to reach it without diverting too much.

Note well, around the map there will be others that are really useful, such as the banal ones Spiribird and their permanent stat bonuses. However, having only 15 minutes in total, I don't recommend wasting too much time exploring the map. Plus the same goes for Defense Seeds, which are great to use but will waste your time.

I recommend the bugs mentioned above because they will allow you to take advantage of the following effects:

Each can be found without too much difficulty, but in case I leave you a map with their locations marked to help you identify them without problems. There will also be marked the locations of a couple of plants with Sticky Berry in case you use crossbows. With these berries you will be able to create some of the best bullets for this battle, namely the Piercing Bullets I. 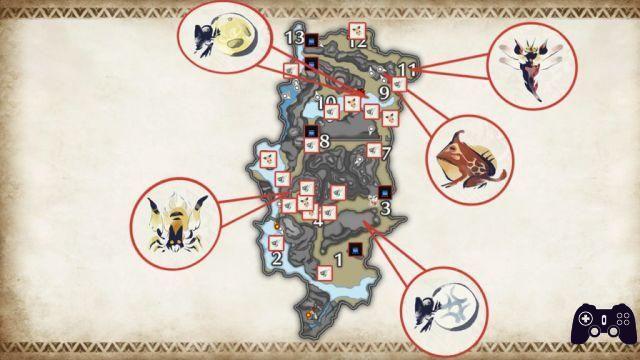 Of the square icons, the red butterflies are the Flame Flames, the blue squares are the Sticky Berry and the green insects are the additional Thread Bugs.

Also remember to take the items in the base camp chest and use the ones you already have in your inventory. In particular, deodorants and traps are a must for this battle against time, for the reasons that I will explain to you.

The first to remove the infernal fire penalty and therefore to free us also from the will-o'-the-wisp, which in some cases can be useful. The latter instead serve to block monsters for a few seconds so that you have time to heal yourself or to attack without being disturbed.

I remind you that you will have one Shock trap already in the inventory, while in the crate inside the tent you will find that cover, equally useful for facing the Magnamalo.

Keep his combos and openings in mind

To close the advice section, I leave you a list of various moves or openings of the Magnamalo and how to use them to your advantage: 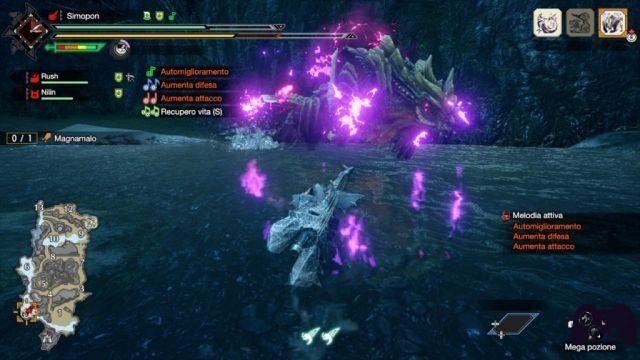 You will understand that the monster will be about to perish when the blue eye symbol appears on its icon on the map, a sign that it will have only 18% of HP or less left.

The (probable) reasons behind the choice of difficulty

Clearly reading all this you will be wondering: but dear Capcom, why do all this instead of offering us a slightly more affordable fight?

I'm certainly not the development team, nor do I know what actually went through their minds while planning the release of this mission, but if I had to guess, I'd say it's the same operation done with Generations Ultimate with the Valstrax, the game cover monster.

His mission in the demo was in fact similarly quite complex, making it clear even to novices that Monster Hunter is not as easy as it seems. 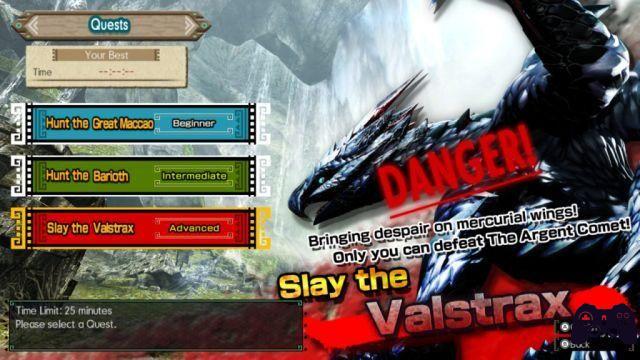 This is especially true for the Rank G (or Grado Maestro in World) which is practically sure there is not in this title, but it also applies to the final stages of the High degree, don't believe. For this reason, in my opinion it is more than legitimate to have inserted a similar challenge, although it certainly created confusion in all those who had completed the two previous hunting missions without problems.