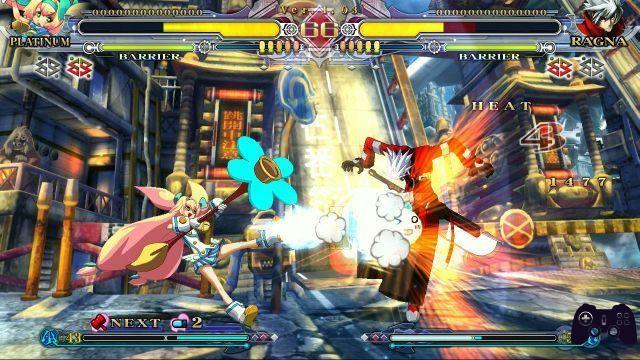 Before Capcom breathed new life into the 2D fighting game genre with the excellent Street Fighter IV in 2009, Arc System Works remained for over 10 years one of the few houses to focus on this genre with the splendid Guilty Gear series, born on PSX and later exported to PC, Dreamcast, PS2, PSP and Nintendo Wii. But when it came to making the leap to the next generation platforms, the guys from ASW, aware of the fact that the complexity of the Guilty Gear game system had been growing with each update of the franchise and that by now it represented a real rock for newbies, they have decided to abandon the now famous brand and to create a new fighting franchise from scratch. In 2009, ARW launched the brand new BlazBlue: Calamity Trigger on PC, PS3 and Xbox 360, achieving immediate success among the specialized press and fighting game fans. The following year BlazBlue arrives on the market: Continuum Shift for the same platforms, which updates the contents of the previous title, without upsetting it; this year, however, the series lands for the first time on a Nintendo platform, with this further upgrade for 3DS and PSP called Continuum Shift II.

The wheel of fate is turning!

Compared to the previous version, BlazBlue: Continuum Shift II basically contains all the DLC characters, two new paths for the story mode, the new Abyss mode (which we will detail later) and some minor balance adjustments. The basic formula, on the other hand, is unchanged, consisting of a complex but affordable fighting system and particular attention to the audiovisual sector. The game presents us with the choice whether to use a simplified combat system, called “stylish” or to use the canonical “technical” approach. If the first can be a good choice to face the title without too many worries, ultimately the gaming experience is absolutely better with the second, which offers us a different style for each of the 18 characters of the game. Each character has a weak, an intermediate and a strong attack, as well as a special attack called "dash". The first 3 attacks are, with the necessary distinctions, almost similar between the various characters, while it is precisely the dash attack that is completely unique for each fighter: some will be short-range, others long-range, some will suck the energy of the opponent, others will chain in combo with canonical attacks, and so on. Each attack can be launched in a low, medium or high version, depending on the pressure of one direction of the directional cross rather than another, and each character will have his own series of very personal combos.

This system is completed by the concept of “cancel”. A Cancel is a move that interrupts a move's cooldown animation, allowing you to attack quickly while ignoring the cooldown of a given move. Each character can insert Cancels at specific moments of their combos, altering them, lengthening them, creating deadly combinations or, depending on the case, interrupting an attack already destined to fail or parade.

To complete it all, there is the usual arsenal of saves, throws, special moves and finales, once again unique to each character. A long and exhaustive tutorial in the game has the task of providing the player with all this information and preparing him for complex tactics in which it is important to take into account timing, range of action and so on.

The other game modes that are available are the canonical Arcade, Story, Versus, Score Attack, Training, Challenge and two curious game modes called Abyss and Legion 1.5.

The Abyss mode consists of a sort of survival mode, with RPG elements, in which you will have to face 999 successive battles, leveling up with each encounter. Instead in Legion 1.5 we will find ourselves having to manage a party of characters on a map, planning each battle with caution given the absence of recoveries between one battle and the next. There is also a Network mode but, contrary to what the name suggests, it does not allow clashes against other players online, but only in local Wi-Fi: a real shame, considering that all the other fighting games on 3DS provide this. option.

From the graphic point of view, BlazBlue maintains the great attention to detail, style and the very fluid animations of the 2D sprites that already characterized Guilty Gear. In this portable version, however, if on the one hand the animations of the characters have been faithfully transposed, the same cannot be said of those of the backdrops, jerky, slow, sometimes non-existent. The backdrops themselves have lost many details in the transposition and appear rather washed out.

In this 3DS version it is possible to activate the option for stereoscopic 3D views: in this mode the game offers us the characters on a plane closer to the observer and the backdrops on one or more more distant planes. The idea itself is good, but the realization is poor and, to aggravate it, having the backdrops on several floors sometimes distracts the player from the fight, not to mention that there are often annoying slowdowns.

The audio unfortunately suffers from a similar fate: the music of the game, composed by the talented Daisuke Ishiwatari, is in itself excellent, however it comes out from the speakers of the portable console distorted, croaking, in low quality. And so does the dubbing, which even suffers from volume problems, sometimes too high, sometimes too low. The game features both English and Japanese language dubbing, but both suffer from this problem. A real shame, because both the long and articulated Story mode and the other modes of the game are completely dubbed. Another point of concern is the language of the text in the game, available only in English, Japanese, Korean and Chinese, with no trace of any other European languages.


Verdict 7/10 Not the best way to enjoy the pearl of Arc System Works Comment With BlazBlue: Continuum Shift II we are clearly faced with a textbook case of hasty port: the starting material is great, starting from the gameplay up to get to the huge story mode and the inclusion of the original audio track. However, in the transition to portable platforms a lot has been lost from the point of view of graphics and sound, not to mention the concerns raised during the review on the European localization. The absence of online multiplayer finally weighs like a boulder on the final judgment, being completely unacceptable for a 2011 game. Anyone interested in the BlazBlue series would do well to consider buying it for a different platform, leaving this as a last chance. Even the PSP version is preferable to the 3DS one, either for a more natural position of the directional cross, or because, depending on the shop, it is sold from 10 to 15 euros less than the nintendara counterpart. For these reasons, the score of the PSP version is to be considered half a vote above the 3DS one. Pros and cons ✓ Deep and technical gameplay
✓ Stylistically satisfying
✓ Rich in modalities and contents x Castrated audiovisual sector
x Absence of online multiplayer
x Lack of localization in Spanish

Do you want to be a video game expert and know all the tricks, guides and reviews for your video games ? Holygamerz.com is a group of video game fanatics who want to inform you about the best tricks, guides and tips. We offer you the best information to be a reference in gaming, so here you can find guides, tricks, secrets and tips so you can enjoy your games to the fullest. Are you ready to get all the achievements of that game that you resist so much? Enter now and enjoy your favorite video game to the fullest!
News SteamWorld Dig 2 Available on Nintendo Switch ❯