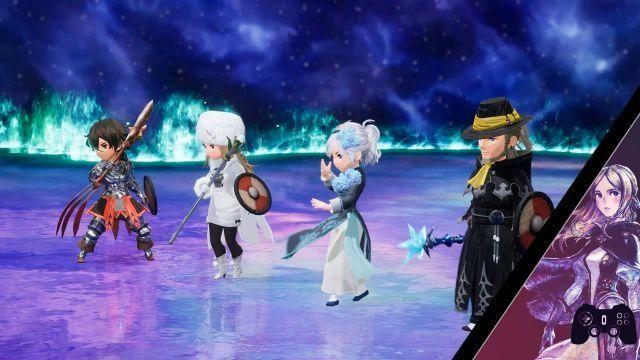 Bravely Default II has 24 classes within the game, some of which are recurring within the series. In this guide, we go through them all and also explain which ones you should aim for, but first of all let's start from the basics.

For more information on the title you can consult ours complete guide.

What are the Classes?

Put simply, it is about specializations that characters can have to unlock certain skills and / or attacks. Each class has its own peculiarities, and at least in this title there are no definitive substitutes like in other games. Consequently, it is often worthwhile to raise the classes to the maximum level.

Each class has two specialties, that is, the bonuses available using it. The first can be used immediately, while the second is unlocked at level 12 of the class. To pass the level limit you will have to wait for Chapter 6, from which you will have access to Portals of the Order scattered throughout the game map, needed to get up to level 15. Classes also have a special skill, which acts as a finishing move and produces various effects after being executed.


However, during the course of your adventure, you will notice that in fact there are classes clearly superior to others or that some sections of the game are really easy using certain strategies. To level quickly we recommend our guide that explains how to level quickly.

All classes of Bravely Default II

Below we list all the 24 classes notes so far, if you want to avoid spoilers don't scroll too far below, as we will list them based on when they are obtained in the game. The only really spoiler is actually the last one, since you have probably already seen the others.

Instead of putting everything in a single article, we have special links for each class that explain them in detail. In this way you can also read the minutiae of each single class or dwell on the ones that interest you most.

A class with no special skills but extremely versatile to start with. It has some very useful secondary skills. It is not recommended to use it during the story as you do not have many reasons to keep it as the main class. However, it makes a lot more sense in the game's postgame, but you'll understand as soon as you get there.

You can find out more by reading ours guide on the Handyman. 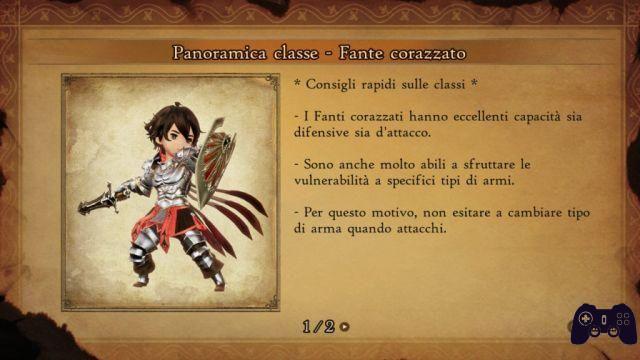 The classic early game tank, useful for absorbing dangerous attacks and dealing damage with powerful physical abilities. This is a very useful class in the early stages.

It unlocks after the first boss battle, but read our guide on the Armored infantryman. 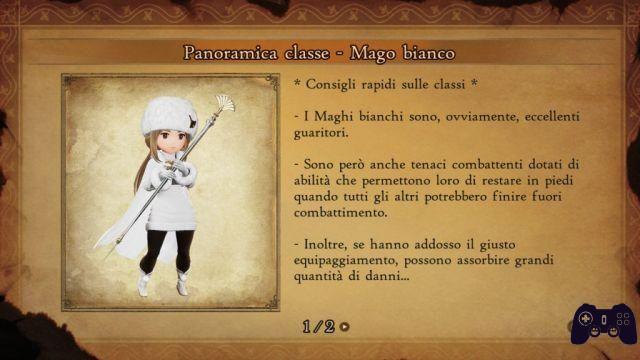 One of the most famous classes in JRPG history, necessary for his healing spells. Generally, it is always good to have a White Wizard in the team to heal, but avoid having too many or otherwise you risk the problem of consuming too many MP and not having enough offensive.

It lends itself very well to being combined with other more advanced magical classes to have even more usefulness. 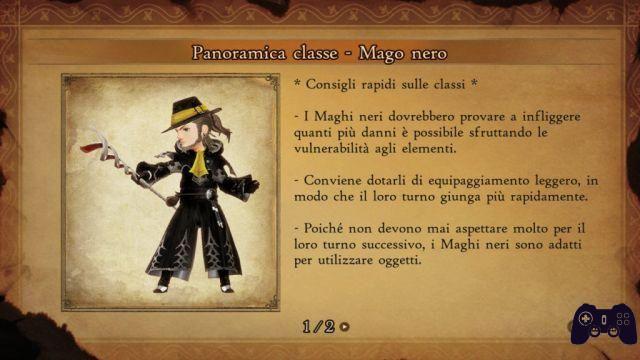 Same thing as the White Wizard but with the black magic, therefore offensive. An extremely powerful class at the start of the game, as you have no other alternative at the bottom. Absolutely necessary for farming and to get rid of many enemies by relying on elemental weaknesses.


If you want to know more, consult ours article on the Black Magician. 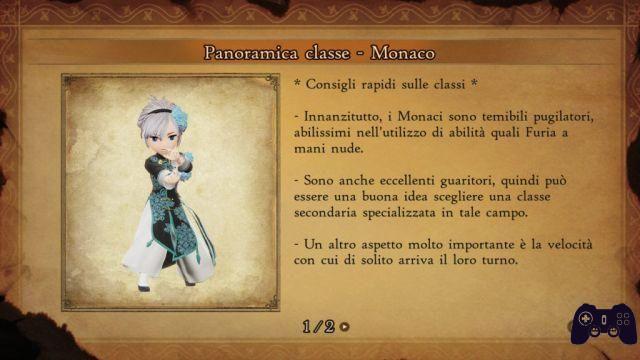 A physical class not to be underestimated. Thanks to skill Bare hands and powerful physical abilities, you will be able to decimate not only enemies in random encounters but also the most powerful bosses and enemies.

To find out how to make him give his best, consult our article on Monaco. 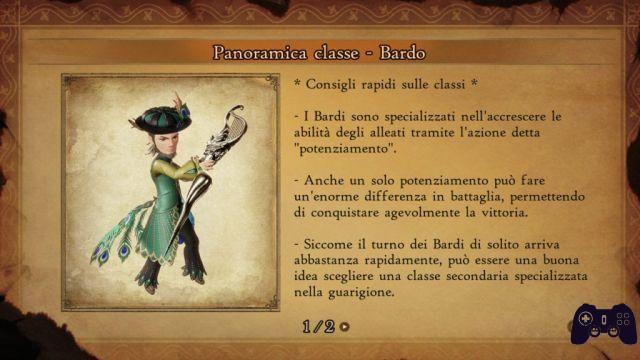 This class seems to replace the Bravely Default Artist. With the power of poetry you can help your allies and therefore we are talking about a strictly support class. Given its power-up abilities, it remains a possible recommended choice for tough and boss battles.

The combo with the White Mage stands out in particular, since these are two excellent classes to support allies. If you are interested in understanding why it is so strong, I recommend ours guide to the Bardo. 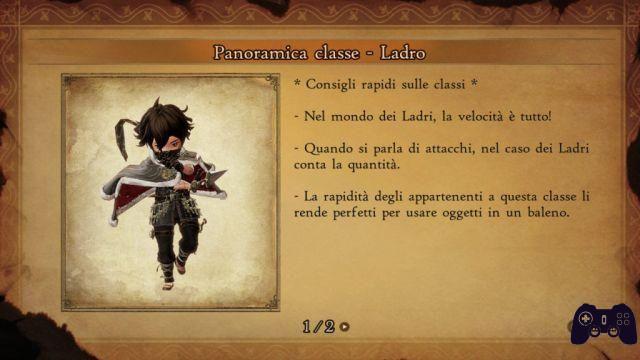 A classic from Square Enix. This class is focused on speed and has little defense, it is great for stealing tools from enemies and for its support skills.

You will get it pretty soon in the game and for that reason you should take a look at ours article about the Thief. 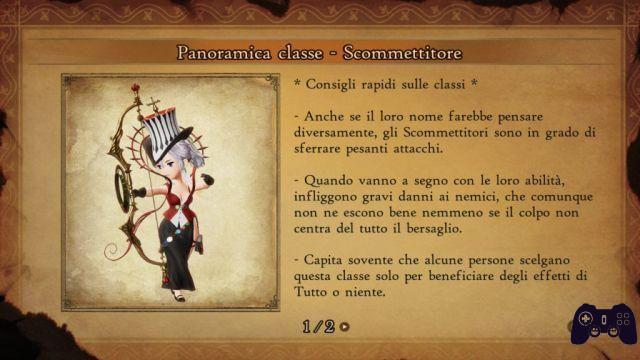 Well, the Gambler appears to be one luck based class. From what has been revealed it is based on luck and therefore does not seem like a very good choice. However, it remains useful due to its learnable ability at level 4 that allows you to increase the characters received at the end of the battle.

This is an optional class, so you won't find the Asterisk by simply continuing with the main story, but by completing a secondary mission. It has some details that make it special, as described in our special guide to the Gambler. 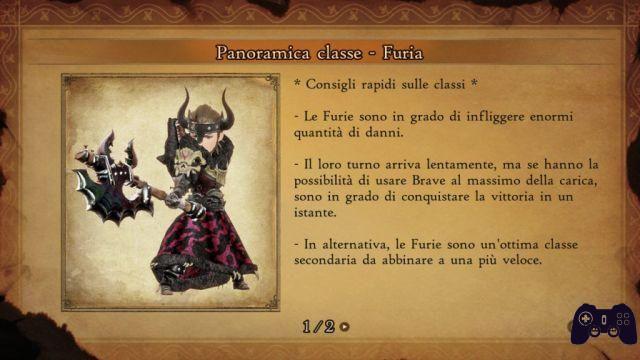 This class resembles that of the Pirate and also of the Valkyrie. It can wield axes and has a high DPS. It is one of the best classes you could wish for for many casual encounters, as it has access to Crescent and other interesting abilities.

We talked about it in our article on Furia. 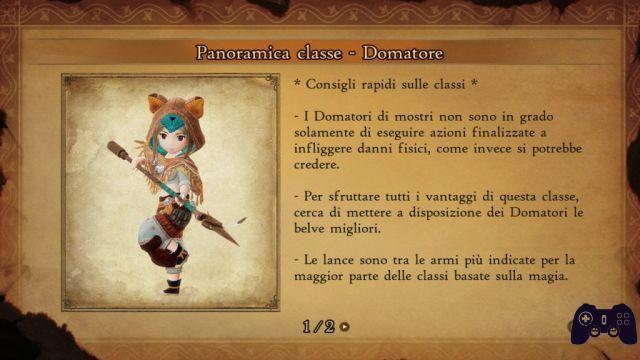 Did anyone mention H'aanit from Octopath Traveler? This class of Bravely Default II is very similar to that of the Hunter of the game mentioned above. You can capture monsters for reuse and even slow down your enemies.

Il Tamer it also lends itself well as a secondary and with a supporting role, as well as offensive. 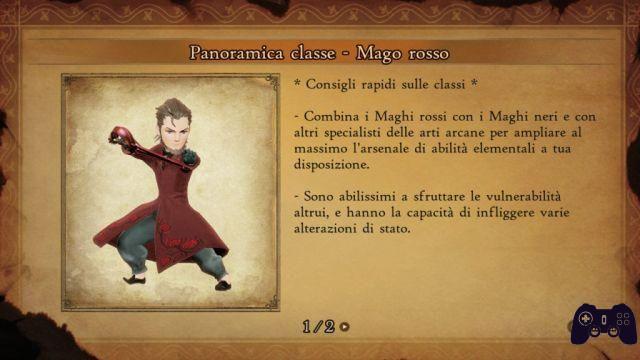 The union of White Magician and Black Magician gives life to the Red Magician. Unlike in Final Fantasy, here you will have access to a unique set of spells, specifically the wind and earth elements.

To better understand the mechanisms of this class, I refer you to ours article on the Red Wizard. 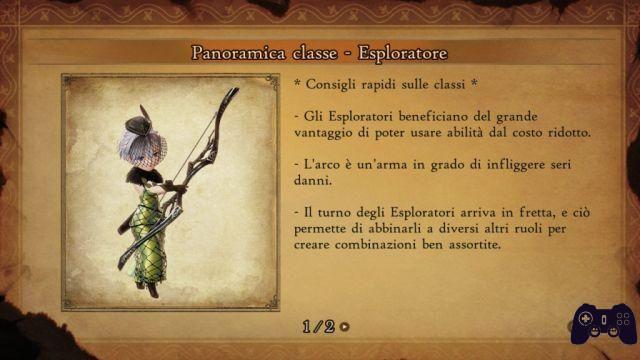 Bravely Default's Ranger clone. This class mainly wields bows and is based on speed and aim, taking advantage of particular skills that are very effective against some families of monsters.

It lends itself well as a secondary class, as described by us in ours guide to the Explorer. 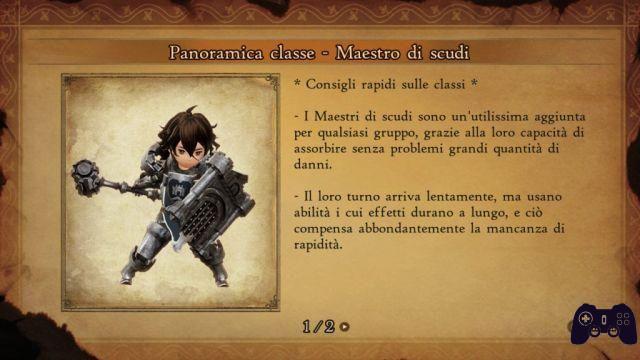 Did someone say total protection? Why the Shield Master takes care of just that and could be very useful to you. If the Armored Infantryman had a solid offensive presence and wasn't very useful in defending allies, the Shield Master does the exact opposite and is the ideal tank to defend your mages.

In addition, it will come in very useful against some bosses, if not even autowin with two shields. This is a highly recommended class throughout the game, especially when paired with the Armored Infantryman or Bastion. 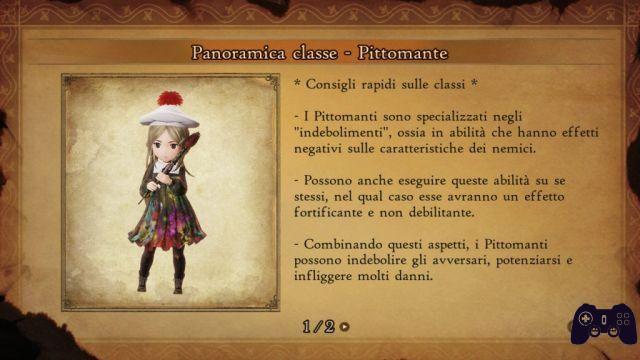 Quite an extravagant class and therefore interesting. The Pittomancer weakens enemies through the use of different colors and consequently remains an interesting choice for the boss fight.

To find out more about its uses, please consult ours article on the Pittomante. 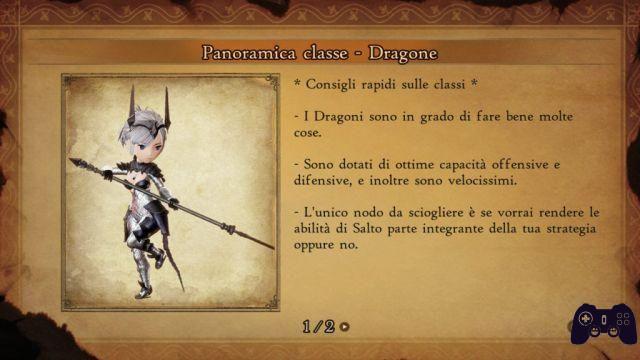 One of the historical classes of Final Fantasy, capable of attack from above. The Dragon is capable of wielding spears and replaces the Valkyrie class by Bravely Default.

It is a must have for fast physical attackers and has access to tons of useful skills.

Il Master of Swords it is a class that has undergone a makeover compared to Bravely Default. It has now significantly changed in terms of equipable weapons and has much more interesting offensive options.

Alternating between compact stance and changeable stance, it presents itself as a solid choice for many battles. 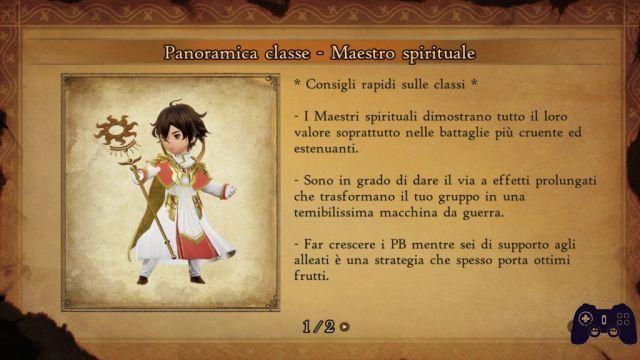 A class with many tricks and support skills. It was a favorite in Bravely Default for bringing to life some of the strongest strategies in the game.

It is a very strong class, as explained in ours guide. 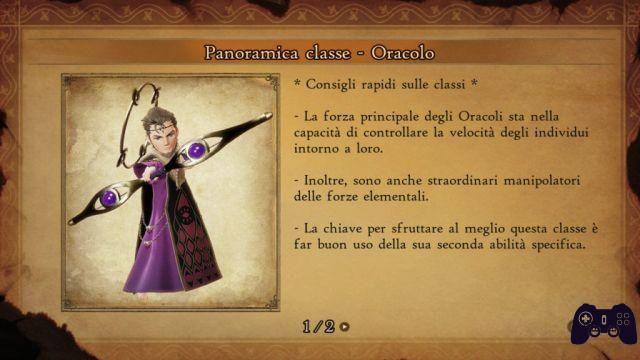 The Chronomago of Bravely Default II. Virtually no need to add anything else, except that it's a pretty useful class, despite not having access to some spells before postgame.

To find out more, please read ours guide on the Oracle. 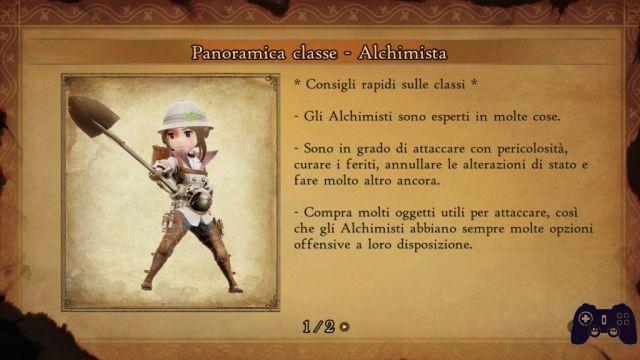 A class familiar to anyone who has played Bravely Default. It is based on combinations of objects to heal allies or deal damage to enemies. This is the second optional class present in the game, obtainable by completing a secondary mission starting from Chapter 3. More details in ours guide to the alchemist. 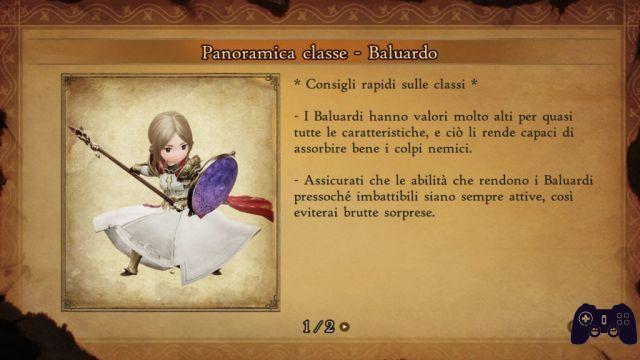 Another tank but with a much higher offensive presence than the Shield Master. We recommend that you try both classes in combination as they are truly deadly in the right hands.

To read all the skills also consult ours drive to the Bulwark. 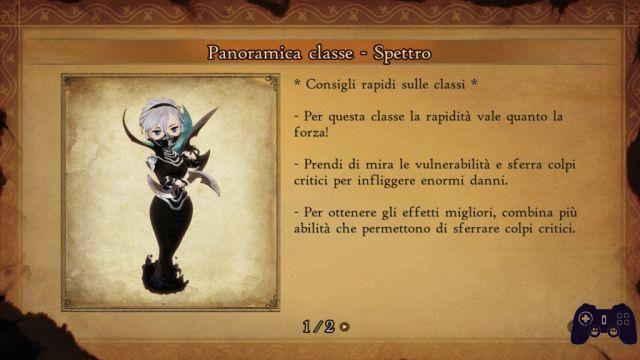 This class partly takes up the Ninja concept and reinvents it in its own way. Ideal if you prefer Speed ​​and Dodging but especially if you like to do a lot of damage. With a vast skill set and excellent Dagger support, it remains one of the best classes for Adelle.

To find out more about the possible uses, consult ours Ghost guide. 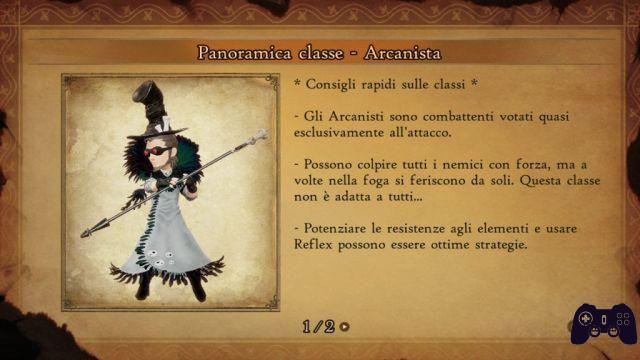 A sort of black magician, but the comparison is not so immediate. Here too we talk about abusing offensive spells but of a different type, since it does not have direct access to the basic elements.

Would you like more information? We also wrote one in this case guide to the Arcanist. 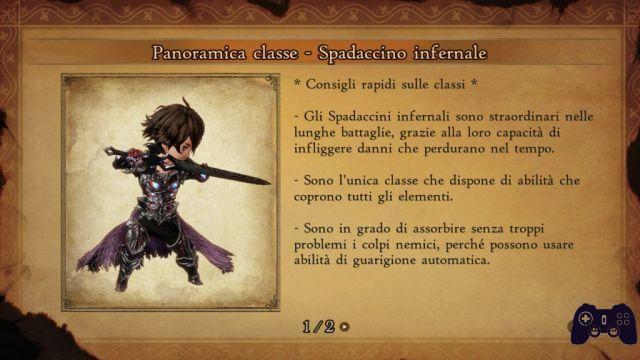 The fusion of the Black Knight and Bravely Default's Fencer. You are free to modify the attributes of your weapon and to do much more.

This is the penultimate class of the game, which has access to good skills, as explained in ours guide to the Infernal Swordsman. 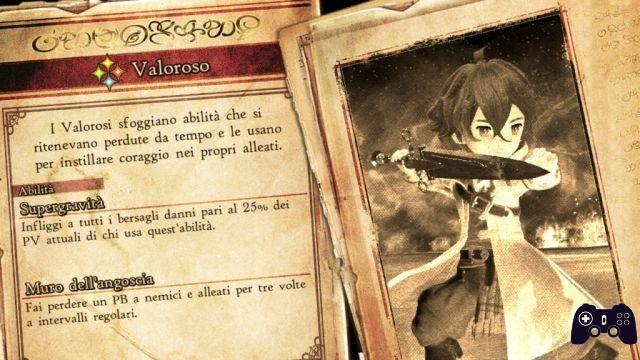 The only class obtainable during the postgame. This is the ultimate class in the game and has access to very powerful abilities. To find out which ones you just need to consult ours guide to the Valiant and to get this class we explain as well how to unlock.

While Karl Marx considers only 2 classes, the bourgeoisie (sometimes called capitalist) and the proletariat, Pierre Bourdieu distinguishes 3 social classes: the ruling or upper class, the petty bourgeoisie and the popular class.

How do you know what your social class is?

What are the social classes in Canada?