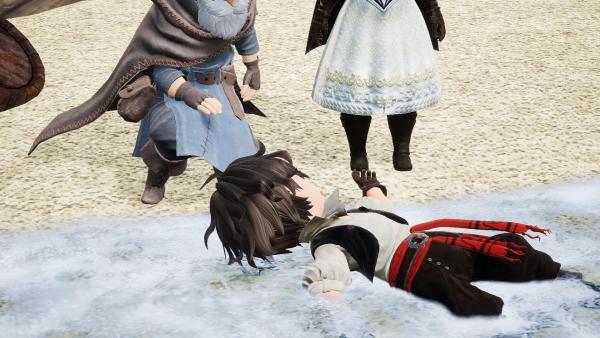 Seth is a sailor who was brought to the shores of an unknown kingdom after the power of the Crystals saved him from a strange storm. This is the protagonist of Bravely Default II, which somehow reminds both Tiz and Yew, who were the main characters of the other 2 games in the main series.

Seth starts the game with class del Handyman. He is one of the 3 characters on our team who start from this very basic class. For more information on the game, feel free to check out ours complete guide.

Goal of the trip

The story of Seth begins with his shipwreck on the nearby beach Halcyonia. Gloria e Sir sloan they find Seth and take him to town to heal him. Having rested for a while, meet Elvis e Adelle on the same beach where he was shipwrecked.

Sir Sloan explains to the newly formed trio that Gloria has been taken hostage in exchange for the Wind Crystal. Eager to help you, Seth and the new company, take the initiative and decide to help Sir Sloan save Gloria.

After saving Gloria from being kidnapped, the Wind Crystal speaks to him. The Wind Crystal is revealed to be responsible for surviving the shipwreck that struck it. In exchange for the power granted by the magical item, Seth has vowed to take responsibility for preventing an impending calamity.

Sir Sloan reveals that he had received the blessing of the Wind Crystal and was labeled a Hero of the Light. He expresses relief that Seth was the only one to inherit this blessing, but as such urges him to take on a new responsibility. Seth vows to protect Gloria, just as the elder had done in the last moments of his life.

Seth is the classic character we recommend for supporting physical roles, such as Armored infantryman, Shield Master o Bulwark, able to defend your team from dangerous attacks. Another great early game choice is the Furia, a class that will give you access to excellent offensive skills.

It is also possible to consider solutions such as the Spiritual master or other magic-focused support classes, but Gloria is usually recommended for those roles.

add a comment of Guide Seth, the protagonist of Bravely Default II