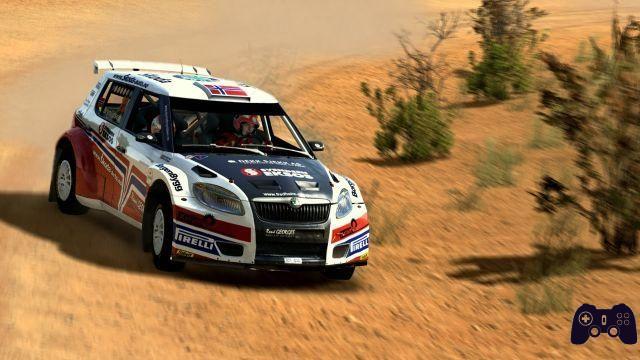 One year after the good WRC 3 team of Milestone returns to the office with a new iteration of its rally franchise, strong as always of the official license of the FIA World Rally Championship. The designated platforms are, like last year, PlayStation 3, Xbox 360, PC e PS Vita, for what promises to be a further step forward for the Milanese development house, more receptive than ever to the criticisms addressed to the previous incarnation of the title. Are we facing the new rally game par excellence? Let's find out together.

After launching the game for our favorite platform, we are greeted by a montage of footage showing compelling moments from rally racing in spectacular slow motion. From the very first moments, the game presents itself with a dynamic and captivating attitude, which is further confirmed by the elegant and clean menus. Compared to the predecessor we note the absence of the Road to Glory mode, while the Rally mode, in which to face one of the 13 rallies of the official license, the mode Quick Stage, thanks to which it will be possible to quickly get behind the wheel to face a single race, without delay of any kind, and the mode Career, by far the most interesting and "full-bodied" for gaming purposes. In the latter mode we will be asked to create our own driver, who will lead to success through the Junior WRC, WRC 3, WRC 2 and finally WRC categories, competing between the drivers and teams actually present in the federation. To avoid the player starting to feel a certain sense of repetitiveness in having to face the same tracks at least 4 times, the developers have however decided to simplify and speed up the whole process, reducing the period we will spend as wildcard: in Junior WRC we will have to face only 2 rallies, which will become 6 and 7 in WRC categories 3 and 2, to finally touch all 13 competitions in the main class. The protagonists of this mode will undoubtedly be the reputation points, accumulated by obtaining rankings equal to or higher than those indicated by our team, and beating the rivals that our manager will designate gradually. The higher the reputation points obtained, the faster we will have the opportunity to move on to the next classes as well as the greater the requests for engagement that will come to us from the various teams. The idea of ​​simplifying the career mode is undoubtedly a winning one and allows you to keep the player's attention alive longer, without giving up a certain degree of loyalty imposed by the official license. In the long run, there is still a bit of a sense of repetitiveness, but which is fortunately dampened by the different behavior of the cars in the various classes. Going up in class we will not only have to deal with more tenacious opponents, who will force us to a driving style that is at the same time more aggressive and precise, but also with the greater power of our cars: for example, if in the Junior WRC and WRC 3 categories we will rarely have to rely on the beloved handbrake, in WRC 2 and WRC we will almost constantly find ourselves having to drift around corners. The inevitable multiplayer roundup closes the mode roundup, with both offline and online options. In offline we will find a Hot Seat mode, in which players will pass the pad from time to time and try to beat their respective times, while in the online we will have a 16-player lobby, with the possibility of challenging their respective ghosts.

After Codemasters' arcade breakthrough with the Dirt series, WRC remains the only rally series out there to prefer a more simulation approach. In addition to the already mentioned differences between the cars of different classes, the driving system created by Milestone comes this year with a renewed management of the estate on various road surfaces: the same car will behave very differently on the road, on ice, on sand, on dirt and so on, with a rather realistic and convincing rendering. The interesting physical system of WRC 4, however, finds a small flaw in the management of accidents: after a rollover, at least 9 times out of 10, our car will fall back on four wheels, allowing us to resume the race without any problem, except for any damage and seconds wasted. Surely this is a choice made for gameplay reasons, but it breaks the immersion and sense of realism that the developers have instilled in every other detail of the game. Speaking of realism it is impossible not to mention the care with which the team has rendered every parameter of our car fully customizable, in order to allow the player to adapt it to the characteristics of the track we are about to tackle: from the brakes to the engine, from the suspensions to the tires, every single feature can be customized, with real changes on the behavior of the car on the road. The same attitude to customization is also reflected in the settings panel, which allows you to activate or deactivate functions such as assisted braking and stability control, to adjust the degree of skill of the opponents (with 10 levels!) Or to switch between gearboxes. automatic to manual, in order to make the game customizable and adaptable to every palate, from that of the driving fanatic to that of the casual player.

Even under the technical front Milestone has made clear steps forward, despite the fact that in some situations WRC 4 still appears rather dated graphically. The game runs at an almost constant 30 FPS, making WRC 3's "hiccups" a distant memory, and the revamped lighting system helps make the experience more varied and interesting: tackling the same track during the day or in poor visibility conditions can be a very different experience, and more than once the evening shadows can put even the most experienced of players in difficulty. The polygonal models of the cars and the damage management are also convincing the weak point of the entire production is the seabed. The overall appearance is in fact sparse, with few details, an embarrassing audience realization and some pop-up problems. A real shame, because while in some situations WRC 4 is very convincing, in others it almost seems to be in front of an older generation title, clearly disfiguring in front of more famous racing games. The picture closes with an excellently crafted sound sector, with car rhombs recorded directly by the real counterparts, always precise and punctual indications from the co-driver and a pleasant musical commentary in the menus and during the overview of the tracks.


Verdict 7.5 / 10 Without great competition, it is easy to become the best Rally game Comment It would have been easy for Milestone to rest on its laurels after WRC 3, given the official FIA World Rally Championship license and the absence of a real competitor as regards rally games with a more simulative setting, yet the Milanese team did not hesitate to review large portions of its rally series in an effort to reach a better level of quality. An effort absolutely to be rewarded and not only in intentions: the new management of the road surface grip, the new lighting system, the streamlining of the most boring and repetitive portions of the game make WRC 4 a conspicuous step forward compared to its predecessor and go to crown already excellent elements such as the wide possibilities of customization and the realistic driving system. There are still some defects such as a certain basic repetitiveness (innate in the genre and of which the developers do not have much to blame) and a graphic aspect still not up to the rest of the package, but WRC 4 is undoubtedly confirmed as The Game to be recommended. to any self-respecting Rally enthusiast, in the hope of seeing further improvements in the future. Pros and cons ✓ Take advantage of the official FIA World Rally Championship license
✓ Solid and realistic gameplay
✓ Significant steps forward compared to WRC 3 x Graphically, there is still a lot to do
x In the long run it can be monotonous

Do you want to be a video game expert and know all the tricks, guides and reviews for your video games ? Holygamerz.com is a group of video game fanatics who want to inform you about the best tricks, guides and tips. We offer you the best information to be a reference in gaming, so here you can find guides, tricks, secrets and tips so you can enjoy your games to the fullest. Are you ready to get all the achievements of that game that you resist so much? Enter now and enjoy your favorite video game to the fullest!
Call of Duty Warzone Guide - "Old Wounds" Mission Guide ❯